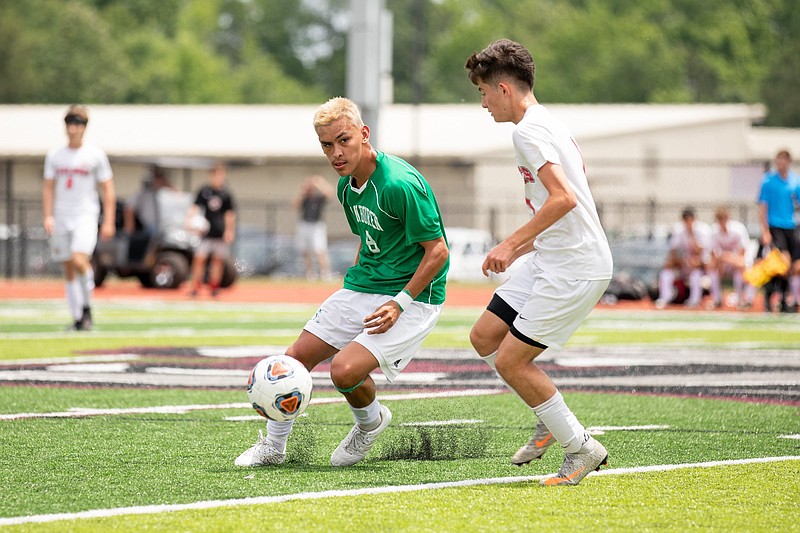 There was no particular reason -- no luck nor tradition -- but with a state championship on the line Saturday afternoon, Rodriguez figured why not do it big.

Van Buren held off 5A-West foe Russellville 2-1 for the Class 5A boys soccer state championship at the Benton Athletic Complex, with the blond Rodriguez taking charge to spark the Pointers' offense. The junior midfielder jump-started things with a goal three minutes into the contest, then provided the service to forward Kylan Almond for what proved to be the match-winner in the 63rd minute.

Van Buren's win not only stopped the Cyclones from securing their third consecutive title -- Russellville had won in both 2018 and 2019 as well as 2012, 2014 and 2015 -- but it also avenged a pair of regular-season defeats against the Cyclones, which were the Pointers' only two losses of 2021.

"I'm just really proud of this group," said Van Buren Coach Nathan Almond, who led the Pointers to their only other boys soccer state title in 2006. "To be in one place as long as I have at Van Buren, that's rare in coaching and I appreciate them. They've treated me well, been patient with me and it's special to get to do it twice in one spot."

The Pointers showed their nerves early. With Russellville (16-6-2) pressing high, it appeared like the Cyclones had a plan to limit opportunities for Van Buren's skilled midfield unit.

But a ball sent into the box by the Pointers deflected off of a Russellville defender, and Rodriguez was in the right spot to put it away.

That moment changed the entire complexion of the game with Van Buren (21-2-1) dominating possession for the remainder of the half.

Trailing just 1-0 at the break, Cyclones Coach Jared Fuller felt confident in his team's chances -- especially since Russellville had been down at half in each of its previous three playoff contests.

"They just don't sub. It's the message we've been sending all week," Fuller said when asked what he told his players. "Fitness is going to play a part, and if we could take them into the late part of the second half and have a chance, I thought we could pull it out."

Fuller seemed to have the right idea.

The Cyclones got back on the ball as they had in the opening minutes and eventually turned their pressure into an equalizer in the 58th minute. Junior Ayden Putnam carried the ball about 30 yards through the center of the park when it pinged around before falling to classmate Daniel Amaya, who put it away to level the match.

But Rodriguez delivered once more.

Five minutes after Russellville's equalizer, the Pointers midfielder fought through a challenge on the edge of the Cyclones' box before delivering a perfect cross to Almond for the go-ahead score.

With 4:10 to play, Van Buren goalie Chris Mendoza was whistled for stepping just outside the penalty area while scooping up a ball. That gave Russellville a free kick from the top of the area, and Cyclones goalie Noe Jimenez came all the way forward to try to send things into extra time.

But Mendoza dove perfectly to his left, parrying Russellville's last serious threat of the afternoon and giving the Pointers a chance to relish the moment with their boisterous squadron of fans.

"It's amazing that we have all those fans come out and support us because they keep us going," Rodriguez said. "All those chants, it just keeps pushing us to go more and more. ... We've worked so hard to get to this point and all that hard work, it got us to where we wanted."