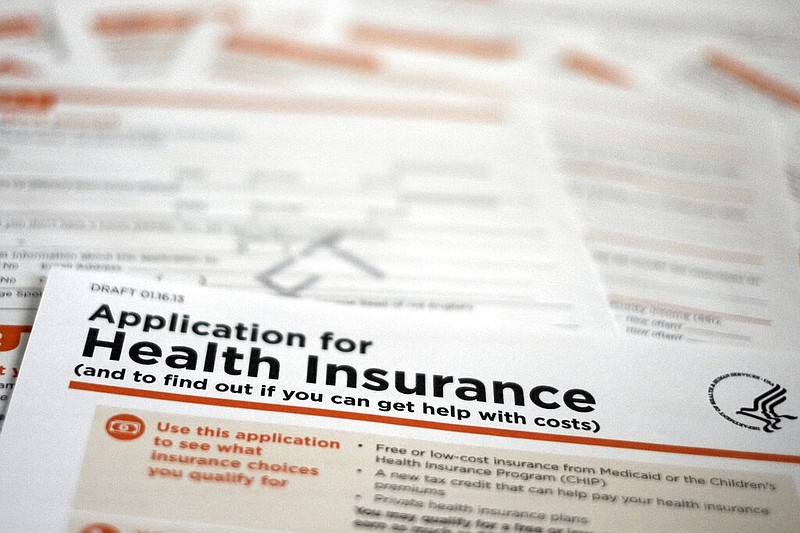 An early version of a 21-page insurance application form from the U.S. Department of Health and Human Services is shown in this March 2013 file photo. (AP/J. David Ake)

The Arkansas Legislative Council on Friday approved a consulting contract worth up to $575,000 with The Segal Group to review health insurance plans for more than 100,000 public school and state employees and retirees, and recommend changes to ensure their long-term solvency.

Without any changes in either plan, state officials project that the two health insurance plans would collectively have a $103.3 million deficit at the end of 2022.

The Bureau of Legislative Research's contract with The Segal Group of Atlanta began Friday and runs through Dec. 31 with an option to renew for six months.

The bureau hired The Segal Group to provide detailed and accurate information about a multiyear strategic plan for the State and Public School Life and Health Insurance Program, according to the contract.

The two firms are among six consultants that submitted responses to a request for proposals to help develop and implement a strategy and legislative framework for the plans.

The request for proposals calls for the consultant to present a final report to the Legislative Council by Oct. 15.

Act 1004 of 2021 transferred the governance of the plans on a temporary basis from the now-dissolved State and Public School Life and Health Insurance Board to the state Board of Finance. The finance board will make its own recommendations to the Legislative Council. The council approved rules on Friday to assign the initial review of the board's recommendations to the council's personnel subcommittee.

"We understand the importance of what this task has been given to us, and we are going to do everything we can do to make a balanced recommendation," said Board of Finance Chairman Larry Walther.

Walther said the finance board needs to be working in concert with The Segal Group to make the best decision for public school and state employees.

"We need to be looking at ... [adjusting] the premium rates and the contribution from the state on an ongoing basis," he said.

"What we have done in the past is we haven't done that on a regular basis, and we have the increasing cost of health care ... yet we don't keep pace with the premiums that the employees pay and the state portion," Walther said.

He said reserve funds of 10% for the plans aren't adequate and will require more money.

Sen. Kim Hammer, R-Benton, asked an official from the Employee Benefits Division's actuary, Milliman, how much duplication there would be in services provided by Milliman and The Segal Group.

Courtney White, representing Milliman, said "there certainly are some overlap.

"We are looking at short-term and long-term goals of the program to make sure that No. 1 you are covering your expenses today, and No. 2 you have enough money down the road to get there."

White said Milliman "shadowed the prior actuary [Cheiron Inc.] through the rate-setting process for 2020, so we didn't really actually start being fully involved until the fall of 2020, and we helped set the rates for 2021 and now 2022.

"I think there will be some duplication of efforts, and we are happy to help work with Segal to find the best answer for this committee and for the employees and for the retirees," White told lawmakers. "Maybe 30% to 40% of the things are duplicative, but we are happy to work with them and find them data that we have analyzed and help them provide input to you."

Under the April 20 defunct insurance board's proposals for 2022, active school employees would face a 10% increase in premiums. Retirees under 65 would face a 15% increase, while retirees older than 65 would see a 20% increase.

Active state employees would see their premiums increase 5%, while retirees, regardless of age, would have a 10% increase in their premiums. The state also would increase its monthly funding per employee by $50 a month under this plan.

These proposals are projected to reduce the public school employees plan's forecast deficit from $70 million to $29.7 million for 2022 and turn the state employees plan's projected deficit of $33.3 million into a surplus of $6.2 million, according to state officials. Both plans have dwindling reserve funds.

Sen. Linda Chesterfield, D-Little Rock, said "we have given people a raise on one hand, and we seem to be taking it away on the other hand with the health insurance."

Sen. Clarke Tucker, D-Little Rock, said "we are also discussing proposed increases [in health insurance contributions] for state employees, and I'm curious about a merit increase on that side."

Bleed, who is the state's former budget director, said "we haven't integrated the process of paying for health insurance and how we cover that within the budgeting process.

"But I would like to integrate it within the budget process at the same time that we look at things like employee raises so we can consider those two in conjunction with one another so that we don't give with one hand and take away with the other necessarily, but instead can hopefully say to people more years than not you are getting ahead."

Amy Fecher, secretary of the state Department of Transformation and Shared Services, said "our plan ... is very rich in benefits more so than most corporate plans and even from other states."

The proposals recommended by the dissolved health insurance board "did not touch the benefits in any way, and most of that was based on feedback that the EBD division received, as well as the board and many of you," she said.

"We were told that people would rather the rates go up than their benefits change, so there is always that option as well," Fecher said.

In a special session in October 2013, the state Legislature approved legislation that authorized the use of $43 million in state surplus funds in 2014 for the health insurance for public school employees in a short-term fix to help prevent 50% premium increases.

State Sen. Jim Hendren, an independent from Sulphur Springs, said the Legislature enacted changes to the health insurance plans in 2015 based on recommendations from a legislative task force, and he saw some of the changes removed in the next few sessions either through legislation or board rule. He said he wants a summary on the changes in the plans "since that last crisis."

Senate President Pro Tempore Jimmy Hickey, R-Texarkana, said "we are going to probably have to put money into this plan, premiums are going to have an increase, and there is going to have to be legislation to correct some of this.

"We are going to have to figure a new long-term governance for the plan, so it won't be under the state Board of Finance ... unless they decide they want to keep it after this," he said. "There might be triggers that would come into place if we are not cash flowing that ... the premiums would increase or that it will be brought before us on like a semiannual or quarterly basis, so we will know going on over the long-term."