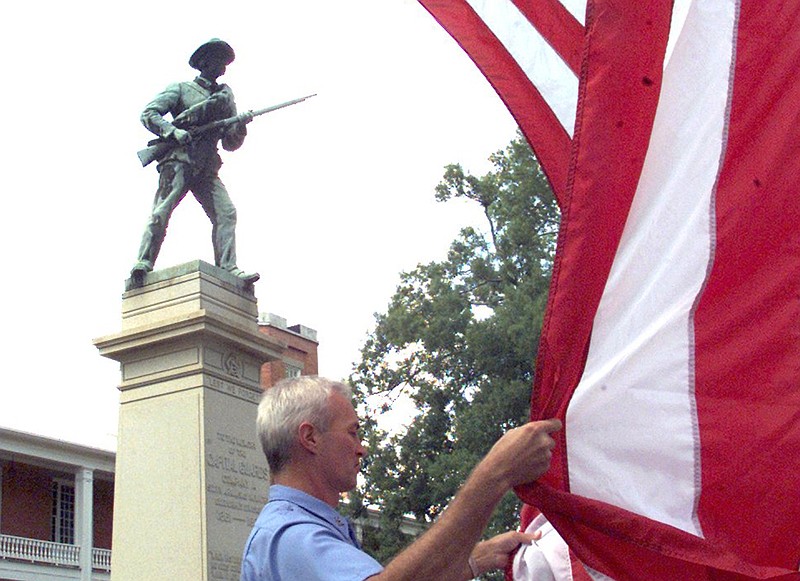 The statue “Memorial to Company A, Capital Guards,” which was removed from the grounds of the MacArthur Museum of Arkansas Military History last year, is shown in this July 2002 photo. (Arkansas Democrat-Gazette/Staton Breidenthal)

A Fort Smith attorney on Wednesday said he intends to file a lawsuit against the city of Little Rock over the removal of three markers commemorating the Confederacy if the markers aren't returned to where they stood in the vicinity of the MacArthur Museum of Arkansas Military History.

Joey McCutchen of the McCutchen and Sexton firm represents Arkansas chapters of the Sons of Confederate Veterans and the United Daughters of the Confederacy, he said. Barring a return of the markers to the sites where they had stood, he said, the groups want them given to the organizations that donated them.

"It's clear that at least the mayor of the city of Little Rock does not want the monuments to be kept at the MacArthur military museum, and we don't want them to be put in a warehouse to never be seen again," he said in an interview Wednesday.

He sent an email Wednesday to Little Rock City Attorney Tom Carpenter, requesting that the city return the Confederate markers that were removed from their locations near the museum.

McCutchen said he would seek an injunction to force the city to comply based on state legislation, signed by Gov. Asa Hutchinson last month, that's known as the "Arkansas State Capitol and Historical Monument Protection Act."

Sponsored by state Sen. Mark Johnson, R-Little Rock, Act 1003 of 2021 barred the removal, vandalism, renaming, rededication or relocation of monuments including statues, memorials or plaques that are on public property and honor a long list of U.S. military engagements dating to the French and Indian War, including the Civil War.

The law says a waiver can be obtained from the Arkansas History Commission to remove or relocate a monument for a period longer than 60 days.

Last summer, amid nationwide protests over police violence against Black Americans, the city removed the three markers in the area of MacArthur Park.

They were "Memorial to Company A, Capital Guards," a bronze statue of a Confederate soldier situated on a podium; a granite block honoring David O. Dodd, a 17-year-old feted as "the Boy Hero of the Confederacy"; and a bench inscribed for "the youth of the State of Arkansas who gave their loyal service to the cause of the Confederacy in the War 1861-1865."

The soldier statue was removed first after it was apparently vandalized. The removal of the other two markers followed.

In a statement after the removal of the "Capital Guards" statue, Little Rock Mayor Frank Scott Jr. said: "It is our intent to ensure our parks are inclusive and welcoming for all. This statue was divisive and in opposition to this administration's internal why -- to unite Little Rock."

"If the Capitol Guards monument, the David O. Dodd marker and the Children of Confederacy marker are not promptly returned to its original location or the law is not otherwise complied with, I intend to file suit to seek a mandatory injunction to compel the City of Little Rock to comply with Act 1003," McCutchen wrote to Carpenter.

Additionally, McCutchen's email indicated that he took issue with the decision to redirect a state grant of $100,000 to the city, originally related to the military museum, to instead help finance the installation of a statue of Daisy Gatson Bates, the civil-rights activist and Little Rock Nine mentor, in the U.S. Capitol.

"We are also researching whether an illegal exaction suit is appropriate in light of the fact that Little Rock chose (wrongfully in our opinion) to redirect funds from the park easement [where the statue was located] to the Daisy Bates statue," McCutchen wrote.

Scott and representatives did not respond to a request for comment via email Wednesday.

In the phone interview Wednesday, when asked how long he plans to give the city before filing suit, McCutchen said he had not set a specific date but acknowledged that he might give the city time to discuss the matter.

"But, you know, we've been going through this process -- been having dialogue -- with the city and the state for many, many months now," McCutchen said. "And we want the monument[s] back."

He added that if "the city of Little Rock doesn't appreciate our history," then the entities want the three markers returned.