Walmart upbeat after results of 1Q 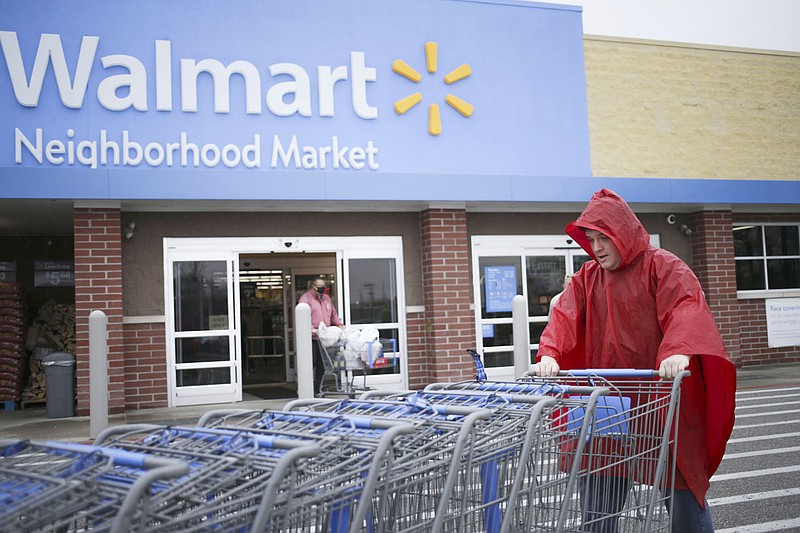 Walmart Inc. reported a strong performance across the board in the first quarter, growing market share in groceries and seeing customers return to shop in stores.

The number for this year's first quarter missed the average earnings estimate of $1.21 per share from 30 analysts surveyed by Thomson Reuters. But adjusting for the sale of Walmart's operations in Japan, Argentina and the U.K., as well as for other variables, brings its per-share earnings to $1.69.

Doug McMillon, Walmart's president and chief executive officer, said in the earnings presentation that every segment of the company's operations performed well in the quarter. He noted that store traffic and grocery market share trends, as reported by Nielsen, were particularly encouraging.

"Our optimism is higher than it was at the beginning of the year," McMillon said. "In the U.S., customers clearly want to get out and shop. We have a strong position as our store environment improves and e-commerce continues to grow."

McMillon said stimulus payments during the quarter had a positive effect, but that leaves the second half of the year with "more uncertainty than in a typical year." Still, the company expects to see pent-up demand from shoppers through the rest of 2021, he said.

Brian Yarbrough, a retail analyst with financial services firm Edward Jones, said the first quarter was better than expected and that the second is off to a good start.

For now, Yarbrough said, consumers are holding on to their stimulus funds and savings are at record highs, creating the potential for more spending over the next few quarters.

But as people get vaccinated against covid-19 and resume a more normal lifestyle, Yarbrough said, they may choose to spend that money on travel, entertainment and other leisure activities.

Walmart's U.S. unit, by far the company's largest, posted net sales of $93.2 billion in the quarter, up 5% from last year.

Sales at stores open at least a year, also called same-store sales, rose 6%, largely on the strength of the market-share gains in groceries. Same-store sales are considered a key indicator of a retailer's health.

Even though grocery is a low-margin category, it accounts for about 55% of Walmart's business, Yarbrough said. That gives added significance to Walmart's gain in market share after three or four years of being outperformed by other grocers, he said.

It's also a category that drives traffic into stores, where shoppers may browse and end up buying other, higher-margin items, Yarbrough said.

Carol Spieckerman, a retail consultant and president of Spieckerman Retail, said that as the grocery category draws in customers, "if Walmart stays on its merchandising game and continues to improve its apparel proposition, it should be able to get customers to cross the aisle and build bigger and more profitable baskets."

That's why she sees Walmart's 20% gain in nonfood items as "big news."

"All retailers, Walmart included, are having to make up for lost margin as low-margin grocery sales surged while the discretionary categories that drive profitability lagged," Spieckerman said.

The unit's e-commerce sales grew 37% over last year's first quarter, the company said, and online sales have more than doubled over the past two years.

Spieckerman expects e-commerce to remain strong even as shoppers return to stores.

"Walmart and Amazon helped onboard millions of customers to digital shopping during the pandemic," she said. "Some customers were digital holdouts until the pandemic hit, and customers that already shop online got comfortable with buying more categories sight-unseen, including grocery."

"That behavior isn't going to change drastically," Spieckerman said. "Convenience is more important than price in many cases, and Walmart is killing with convenience."

Walmart International's net sales shrank 8.3% to $27.3 billion. The company said recent divestitures of its businesses in the U.K., Japan and Argentina lowered net sales by $4.2 billion. They got a boost, however, of nearly $1 billion from changes in currency exchange rates.

Overall, Spieckerman said, the company's ongoing store remodels, its Walmart Plus subscription program, and its forays into solutions and services such as health care and advertising "are all long-term bets that should continue to pay off across all channels."

On the basis of its strong first quarter, Walmart updated its guidance for the second quarter and fiscal year.

The retailer said in the earnings report that the guidance "assumes covid-19 conditions continue to improve as well as no significant additional government stimulus packages for the remainder of the year."

Its fiscal-year guidance shows no change in same-store sales but an earnings-per-share increase in the high single digits. Walmart International's net sales are expected to drop between 20% and 25% in constant currency because of divestitures.

A replay and transcript of Tuesday's conference call with investors are available at Walmart's corporate website by logging into http://corporate.walmart.com/newsroom/financial-events and selecting the First Quarter Earnings Release event.

Walmart will hold its annual shareholders business meeting virtually, starting at 10:30 a.m. June 2. Shareholders will be able to attend the meeting through a live audio webcast.

Shareholders of record as of April 9 are entitled to vote on proposals. Details on how to access the meeting and cast votes may be found in Walmart's proxy statement.

The public will also be able to listen to the meeting, without the option to vote, through a link on the company's website.