Historic guide to Black-friendly businesses during Jim Crow included about 230 listings in Arkansas by Sean Clancy | May 17, 2021 at 1:55 a.m. 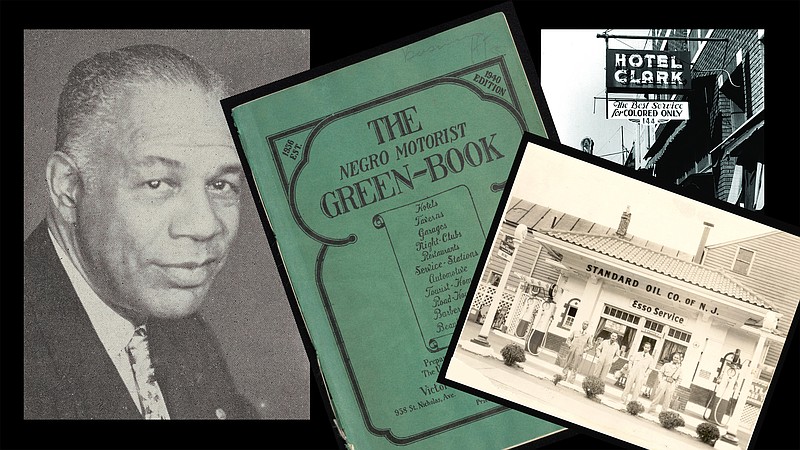 If you were Black and traveling through Arkansas in the middle part of the 20th century, you might have stopped at the Lewis Esso Service Station at 901 Locust St. in North Little Rock.

A.C. Lewis opened the business in 1949, and it was listed in The Negro Motorist Green Book, a guide founded in 1936 by New York City postman Victor Hugo Green.

The Green Book, as it was known, provided information about restaurants, gas stations and other businesses friendly to Black travelers during Jim Crow-era America.

Photos and uniforms from Lewis Esso Service Station are among the items included in "The Negro Motorist Green Book," a new exhibition opening Thursday at Mosaic Templars Cultural Center in Little Rock. The exhibit will be up until Aug. 1.

Courtney Bradford is the center's curator and is overseeing the exhibit. She is also A.C. Lewis' niece.

"This is Angelo Charles Lewis," she says as she points to a black-and-white photo from a conference of franchisees of Standard Oil Company of New Jersey, which owned the Esso network of service stations.

Standard Oil was one of the few corporations that had Black franchisees, and copies of The Green Book could be bought at Esso stations around the country.

The book was a resource for Black travelers looking for safe places to eat, sleep and shop. It was also a handy tool for Black businesses to connect with customers, and the new exhibit explores the impact of the guide during its three decades of publication.

"It encompasses what African American travelers would have encountered when they were traveling through the country during segregation," Bradford says.

The exhibit's stay at the cultural center kicks off at 6 p.m. Thursday with a block party that will include food trucks, music, vendors and more.

The sprawling display, which takes up part of the center's downstairs space and the upstairs ballroom, will include firsthand accounts, photos, video and artifacts from some of the more than 10,000 businesses included in The Green Book, which published annually until 1966, two years after passage of the U.S. Civil Rights Act of 1964 (publication paused during World War II).

There are images of travelers enjoying their vacations, as the rising Black middle class became more mobile and traveled the country, and there are reminders of the dangers Black Americans faced simply in getting from one place to another.

"We have photographs from restaurants, of ladies going to beaches and of weddings in Harlem and Chicago," Bradford says. "And there are items about the downside of traveling, like entering 'sundown towns' and coming across the Ku Klux Klan." (Sundown towns prohibited overnight stays by Black people.)

One of the pieces Bradford is most excited about is a 13-foot-long, 200-pound sign from Chicago's Sutherland Hotel, which was famous for its lounge that featured jazz performances and was listed on the National Register of Historic Places in 2011.

"It was a battle to decide if we were going to hang it or not, but it's going to get done and it will be hanging right downstairs," she says.

Utilizing the upstairs ballroom adds to the unique atmosphere, Bradford says, and that part of the exhibit will include an interactive feature that takes visitors on a simulated car ride.

"When you go upstairs, it will be a different mood. This will be you beginning your journey."

The exhibit was developed by the Smithsonian Institution Traveling Exhibition Service and Candacy Taylor, a photographer, documentarian and author of "Overground Railroad: The Green Book and the Roots of Black Travel in America."

It will visit museums across the United States for three years and comes to Little Rock after a stop at the National Civil Rights Museum in Memphis.

Cultural center interim director Quantia Fletcher says the exhibit "delves into the impact of travel and segregation while highlighting hopes and successes of African American communities throughout the South. Arkansas has direct ties to 'The Green Book,' including sites across our state that were listed in the guide and served as safe places for Black travelers."

Not only was the Lewis Esso Service Station and another Lewis-owned station on Cypress Street in North Little Rock listed in The Green Book, so was Velvatex Beauty College of Little Rock, the Latimore Tourist Home in Russellville and others businesses across the state.

About 230 Arkansas businesses were listed at least once in The Green Book.

Many of the Little Rock spots listed were in what was once the bustling Black business district where the cultural center stands today.

That's part of the inspiration behind the block party, Bradford says.

Bradford wasn't even a year old when her uncle died. The service station later became Lewis Towing and is still open at 123 SA Jones Dr. in North Little Rock.

When she began working there as an adult, she learned about the history of the business.

"He was so involved with the community," she says of her uncle. "He sponsored a softball team. And even though it was a Black-owned business, everyone came. It was a neighborhood station and Black, white, everyone did business there."

When talk began about bringing "The Green Book" exhibit to Mosaic Templars, Bradford wanted to make sure her uncle's shop would be represented.

"They saved a lot of stuff," she says, pointing out the surprisingly stain-free, white overcoat Lewis wore while working on cars.

A manicure set, curling iron and other items from Velvatex Beauty College, which are part of the center's collection, are included in the traveling exhibit.

Velvatex, which was opened in 1929 by M.E. Patterson, was mentioned in the guide as early as 1947, according to "The Green Book in Arkansas," a blog entry by the Department of Arkansas Heritage (see archives.arkansas.gov). Mosaic Templars Cultural Center is a division of the department.

"Velvatex is still here and still active," Bradford says. "It's amazing that we were able to get those pieces from Velvatex and that they are still around. It's a really neat collection."

ON THE BIG SCREEN

The Green Book made some headway into pop culture in 2018 when "Green Book," a film starring Viggo Mortensen, Oscar-winner Mahershala Ali and Linda Cardellini was released.

Bradford thinks the movie, about a tough bouncer driving a Black pianist through the South on a concert tour, didn't do a good job in telling the story of the book.

Bradford says she wants visitors to leave the new exhibit "with a better understanding of the importance of The Green Book, and what it means to be self-determined when it comes to Black businesses; whether it was their business or the book, they had to create their own."

The introduction from the 1949 edition of The Green Book notes that the guide was started to "give the Negro traveler information that will keep him from running into difficulties, embarrassments and to make his trips more enjoyable."

It concludes with the hope that it will someday be obsolete.

"There will be a day sometime in the near future when this guide will not have to be published. That is when we as a race will have equal privileges in the United States. It will be a great day for us to suspend this publication for then we can go to wherever we please, and without embarrassment. But until that time comes we shall continue to publish this information for your convenience each year."