Sutton gets his due with Hall of Fame 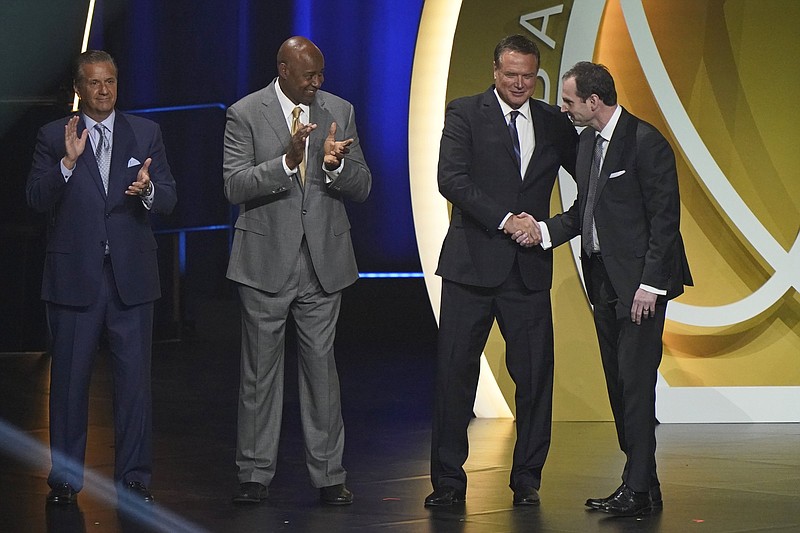 Sean Sutton, right, son of Eddie Sutton, shakes hands with Kansas coach Bill Self, as Kentucky coach John Calipari, left, and Sidney Moncrief after his father was enshrined as part of the 2020 Basketball Hall of Fame class, Saturday, May 15, 2021, in Uncasville, Conn. Moncrief played at Arkansas while Eddie Sutton coached there. (AP Photo/Kathy Willens)

Eddie Sutton's trek to the Naismith Memorial Basketball Hall of Fame came to an end Saturday.

Sutton, who died in May 2020, was posthumously inducted into the hall during a ceremony in Uncasville, Conn. Sutton was elected to the hall shortly before his death, but the 2020 class -- which included basketball legends Kobe Bryant, Tim Duncan and Kevin Garnett -- had a delayed induction due to the covid-19 pandemic.

Sutton was a finalist for the hall of fame seven times before he reached the 75% voting threshold required for enshrinement. The Naismith Hall of Fame is considered the highest individual lifetime achievement in basketball.

"Today is a special day for the Sutton family," said Sean Sutton, the second of Eddie Sutton's three sons, during a prerecorded speech that played during the ceremony. "My brothers and I are honored to be here and share this moment with our families. We had hoped and prayed that this day would come, that our dad would finally get inducted into the coveted Basketball Hall of Fame. We are so grateful that he was alive to get the call, grateful we were there to see the excitement on his face, but sad he isn't alive to give this speech. He would have done an amazing job.

"My dad loved the game of basketball and embraced the history of the game. His teams were tough, disciplined and known for playing great man-to-man defense. He was a tremendous motivator and his teams always played hard."

Sean Sutton was joined on stage by hall of famers Sidney Moncrief, John Calipari and Bill Self, who served as Eddie Sutton's presenters.

Moncrief was an All-American under Sutton at the University of Arkansas in the 1970s. Self coached under Sutton at Oklahoma State and Calipari was a long-time acquaintance.

"It gave my dad great joy to know his coaching accomplishments were recognized by his peers who he respected and loved," Sean Sutton said.

Eddie Sutton won 804 career games and 10 regular-season conference championships in his career and was the first coach to take four schools -- Creighton, Arkansas, Kentucky and Oklahoma State -- to the NCAA Tournament. He was elected to the College Basketball Hall of Fame in 2011.

"The thing that impresses me is the excellence in any program he puts his hands on," said former NBA and college coach Larry Brown during a video presentation. "If you look at most of the places he went, they were able to win right away.

"If you look at his body of work, look at the coaches he turned out that worked for him -- he's just had an amazing imprint on our game."

Moncrief said Sutton was "critically" important to the success of Arkansas' basketball program. Sutton coached the Razorbacks for 11 seasons from 1974-85 and compiled a record of 260-75.

"He coached us to play at a higher level because he coached us up," said Moncrief, who was inducted into the Naismith Hall of Fame in 2019.

Moncrief, Sutton and Nolan Richardson (2014) are the only individuals with ties to the Arkansas program who have been inducted into the Naismith Hall of Fame.