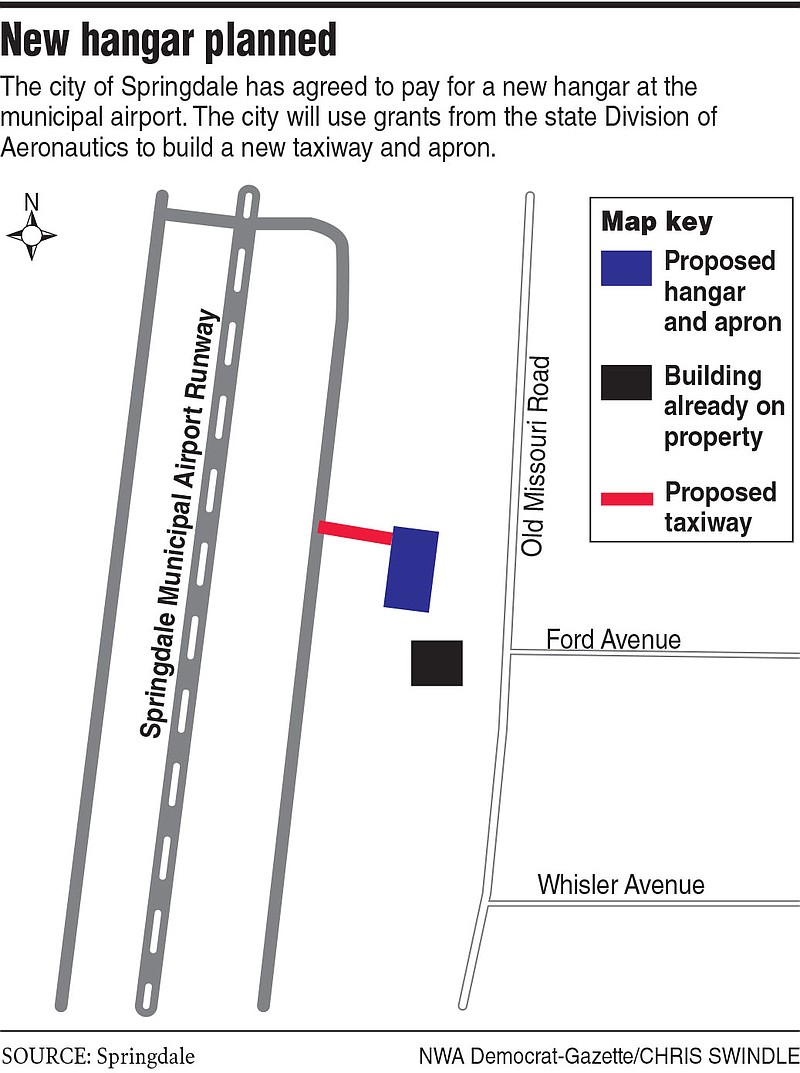 SPRINGDALE -- The City Council gave the Municipal Airport a lift Tuesday with a commitment of $700,000 to build a new hangar.

The hangar project will benefit the airport in two ways, said Wyman Morgan, the city's director of administration and finance. First, it will provide a place to put more airplanes. Second, it will result in an increase in fuel sales with a fuel tax benefiting the airport's budget, he said.

The city's money would match two grants from the Arkansas Division of Aeronautics set for approval next week, he said. The state would pay about $400,000, and the city would provide $131,000. Then, the city would build the new hangar with money from the budget's unreserved funds if it doesn't get another grant, Morgan said.

The city will build the 100-by-100-foot hangar, taxiway and apron on the east side of the airport, just north of where Ford Avenue meets Old Missouri Road. The project will include automobile access to Old Missouri.

The city could earn about $32,400 a year or $2,700 a month by leasing all the individual bays in the new hangar. The airport typically keeps a waiting list of about 25 people who want to rent hangar space.

Larry Imel has been a pilot for 55 years and recently retired as a corporate pilot for Lindsey & Co. He likened a personal aircraft to a car, but more expensive.

He noted overnight hangar rental in cities where Lindsey executives flew could cost $125 a night.

"A hangar is really important to a pilot, if he likes his airplane," he said. "What if there's a hailstorm? You don't want it tied down on the line to blow away."

The city earns about $50,000 a year on fuel tax, which goes back into the airport's budget, Morgan said. The city also receives sales tax funding from airport businesses such as the restaurant, airplane inspections and charter flights. Any of the businesses at the airport that collect sales tax would return it to the city, he added.

The airport owns 95 hangar spots, all of which are occupied. The spaces rent for $74 to $2,600 a month depending on the size of spaces rented and amenities such as automatic, rolling doors and climate control.

Morgan said the Airport Commission has included a new hangar in its five-year plan, which is updated each year in accordance with Federal Aviation Administration guidelines.

The long-term goal includes three more hangars at the site and enlarging the apron.

Springdale was the second-busiest airport among the state's municipal-size airports in 2020 and 2019, according to data on the Federal Aviation Administration's website. Airports in Springdale, Fort Smith, Fayetteville, Rogers and Texarkana were included in the report; Bill and Hillary Clinton National Airport/Adams Field in Little Rock and Northwest Arkansas National Airport were not.

Morgan said roughly 150 aircraft are based at the Springdale airport.

Summer Fallen, the airport services director for Fayetteville, said the city holds 94 spaces in hangars at Drake Field, from which the city makes about $199,000 in rent each year. Owners of private or corporate hangars at the Municipal Airport also rent space, she said.

The airport counts about 130 airplanes based at Drake Field.

Rogers last year began a $300,000 expansion for the airport to reconstruct the current taxiway and build another. The project also includes infrastructure for future hangar construction, Krutsch said.

The airport has the capacity for 130 based aircraft.

The Fort Smith Regional Airport has about 90 planes based there.