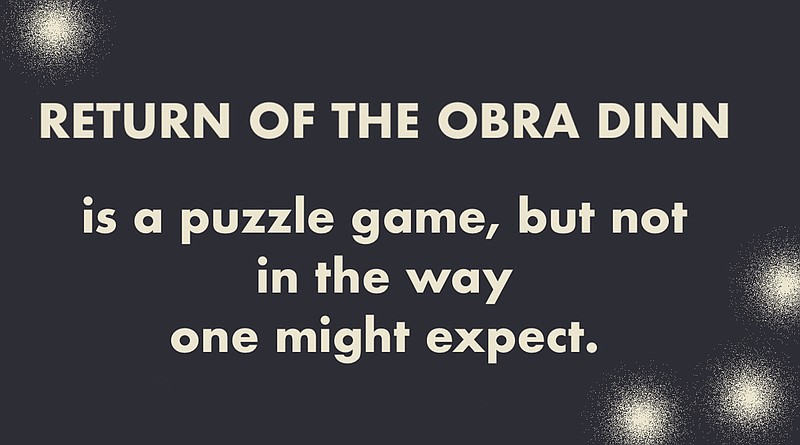 Puzzle games have always held a special place in my heart, which is one reason "Return of the Obra Dinn" resonated so much with me.

"Return of the Obra Dinn" is a puzzle game, but not in the way one might expect. The game opens with you in a boat and a ferryman giving you a hard time for wanting to see the Obra Dinn, a ship that mysteriously reappeared off the coast of England unmanned as all of its crew has disappeared.

Your job as an insurance assessor is to determine the identities and fates of all 60 people who were aboard the ship to figure out how much their families are owed (or how much their families owe the government). The game is set in 1802, and the graphics contribute to that atmosphere. The game's two-tone color palette gives it the feel of text-based games played on a Macintosh computer, which makes the game feel older than it is and contributes to its setting.

But what drew me into the game was its somewhat slanted similarity to a game series I hold in high nostalgic esteem ... The "Nancy Drew" series of video games was beloved by my whole family. "Nancy Drew" is a point-and-click adventure/puzzle game series in which you play a detective who uncovers the truth behind whatever event is going on.

The games became staple Christmas presents and, every year or so when a new game would come out, my family would gather on the brown, somewhat-scratchy couch downstairs so we could watch the laptop screen on Dad's lap. We sat shoulder-to-shoulder attentively while he manned the game's helm as Detective Nancy Drew.

Dad was strict about not looking up guides, as he viewed that as cheating (a lesson I held onto when playing "Return of the Obra Dinn"). Dad was the brains; my sister and I were the technology gurus, and Mom was the wake-me-up-when-you-figure-it-out queen.

I may have been slightly misleading in my description of "Obra Dinn." You play an insurance assessor who, through his compass, which he was given along with a mysterious book, can witness a dead body's last moments. And that's just the beginning of the otherworldly elements of the game.

So, each time you see a body on the ship, your character can take out his compass and travel into that person's last moments. When this happens, you hear what's often a few lines of dialogue followed by a sharp noise and then the scene is revealed to you in a snapshot, whereupon you are free to explore the scene. It's as if someone has taken a picture of the victim's death and you, with your magical compass — which is unfortunately never fully explained — can peruse the picture as though you were really there.

But no one moves. No one speaks anymore. It's just you and death.

As you explore the memories of the dead, you fill the mysterious book you were given. The book is a fascinating game mechanic and acts as the player's lifeline. It allows you to take notes without having to pull out a pencil and paper (though you'll probably end up doing so anyway as it makes the game much more fun).

The book contains a large hand-drawn picture of the entire crew gathered around what appears to be an execution. A wrapped-up body is hanging over the bow; a line of men are shooting it, and (almost) all 60 people aboard the ship are present. Then there's the crew list with names and roles. You're meant to match the crew mate with the face and determine his or her "fate." How did this mate die? By whom (or what)? Or, most interestingly, did the person even die?

As you progress through the game, you'll grow more and more proud as you narrow down the choices and piece together the puzzle.

If you're into puzzle games, like educational mysteries and if the idea of learning how people died fascinates you, then I recommend "Obra Dinn."

But I might be giving this game slightly more praise simply because of its strong nostalgic ties, as well as its timing in my life. "Return of the Obra Dinn" was one of the first games I played after the death of a family member. Perhaps its treatment of death as a mystery worth exploring helped me cope. Perhaps the game's nostalgic atmosphere softens fear of the unknown. It masked the concept of death with my joy of puzzle solving; and the mechanics, themes and game genres matched those of the "Nancy Drew" series, which dulled the sting of death even further. Those similarities brought me back to memories with my family. It was unintentional, but that doesn't make it any less meaningful.

When I played "Return of the Obra Dinn" with my boyfriend, I found myself recalling those times on the family couch watching Dad struggle through a puzzle or listening to Mom suggesting ways to move forward. Some scenes even took me back to watching Dad play "Amnesia: The Dark Descent" as the visual of your character holding the compass was reminiscent of Daniel holding the lantern.

The feeling was such that even the surreal elements of "Obra Dinn" elicited the thrill and excitement of puzzle-solving.

Living far from family and having recently lost a loved one, I realized as I played "Obra Dinn" how precious those times are. Even if I'm playing a different game on a different couch on a different computer with a different person, I can still see me, my mom, my dad and my sister sitting on the brown couch, and it helped me realize that those memories will never go away.

And like in "Return of the Obra Dinn" I can pause time and explore those snapshots as much as I want.

Return of the Obra Dinn