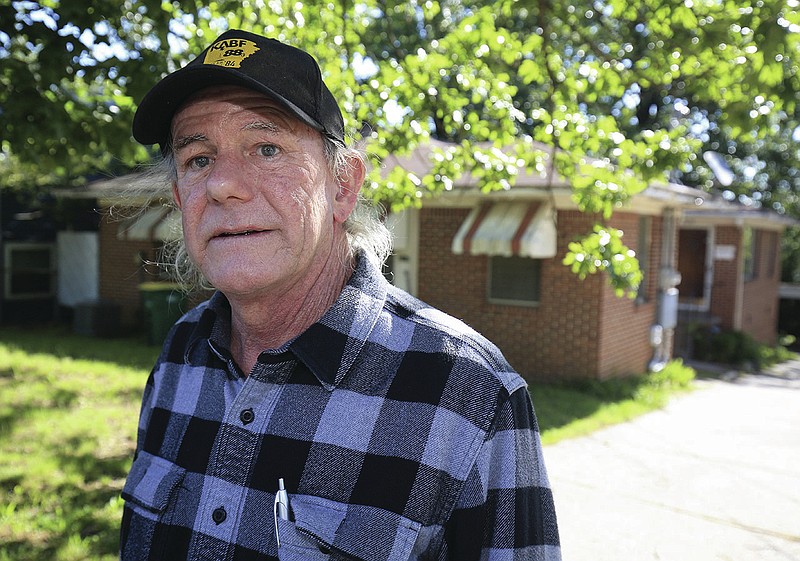 Neil Sealy with Arkansas Renters United talks Thursday May 13, 2021 in Little Rock about an eviction as he stands outside the duplex where the eviction occurred. (Arkansas Democrat-Gazette/Staton Breidenthal)

Applications are available beginning today. A federal moratorium on evictions, enacted during the covid-19 pandemic, is scheduled to end June 30.

A higher income limit for tenants -- 80% of area median income -- means more will be eligible to apply.

The Arkansas Department of Human Services, which is overseeing the program, won't require certain paperwork that proved challenging for renters in other assistance programs.

Landlords who are owed rent also can apply.

Previous programs had put income eligibility for renters at 50% of area median income, which varies by county. The highest income limit for a family of four under the new program is in three Northwest Arkansas counties, at $59,900 annually. Forty-two counties have the lowest limit, $43,300.

Tenants in Benton, Pulaski and Washington counties may be directed to apply at the county level first because those three counties received separate rental assistance funding. After that money runs out, those counties' residents can apply at the state level.

Applications and further information will be available in English, Spanish and Marshallese at ar.gov/rentrelief.

After the first two weeks of the center's operation, officials will reassess hours based on call volume, department spokeswoman Amy Webb said.

The new rental assistance program, funded with $173 million from the federal Consolidated Appropriations Act, covers up to 12 months of back rent and utilities as well as up to three months of prospective rent. Late fees up to 5% of the total amount of approved rental assistance can also be covered under the program, said Mary Franklin, director of the department's Division of Counties.

Tenants must have missed rental payments because of income loss or significant financial burden related to the covid-19 pandemic, as well as be at risk of experiencing homelessness or housing instability, Franklin said. Landlords must agree not to evict for nonpayment of rent for the months the funding covers.

The state's goal is to have at least 65% of funding obligated by September, Franklin said. Up to 10% of the total can be spent on administration, and some of that will be used for community outreach to ensure Arkansans know about the program, Franklin said.

"Our focus is going to be, of course, to get this funding out there," she said.

The state is reaching out to community groups that work with renters, such as Arkansas Renters United.

The assistance is sorely needed in Arkansas, advocates said. National and state housing experts have long feared an "eviction crisis" when a federal ban on certain evictions for nonpayment of rent, enacted in September, expires at the end of June.

The ban by the federal Centers for Disease Control and Prevention aimed to reduce the spread of covid-19 by preventing renters from being evicted and subsequently moving into congregate settings such as homeless shelters.

The eviction ban faces challenges in court. A federal judge recently ruled the CDC exceeded its authority when it issued the prohibition. The Justice Department appealed, and a stay has been issued.

Advocates for renters say that if the eviction ban is overturned or expires before rental assistance reaches tenants, then large numbers of evictions could occur.

Nationally, about 8 million families are behind on rent, said Sarah Saadian, vice president of public policy at the National Low Income Housing Coalition, a housing research and advocacy group based in Washington, D.C.

"If the thing goes down in court, it will just open the floodgates for a lot of evictions," said Neil Sealy, an organizer with Arkansas Renters United, a Little Rock group that advocates for the rights of tenants statewide. "It did provide some protection for tenants and gave them time to try to find assistance and get back on their feet."

Officials are "racing against the clock" to get money to tenants nationally before the ban on certain evictions ends, Saadian said.

In Arkansas and elsewhere, rental assistance programs have been slow in getting money to tenants, according to state data and housing experts.

The state Human Services Department has covid-19 emergency solutions grant funding available for rapid rehousing and homelessness prevention, both of which can include rental assistance. Much of that money was administered to local agencies last year, and they are distributing it to renters.

"This spending has been slow because of the eviction moratorium, but we believe it may increase once that is lifted and eviction notices begin," department spokesman Gavin Lesnick wrote in an email.

More than $6.1 million was allocated for rapid rehousing, which aims to put people experiencing homelessness back into permanent housing quickly. Of that, about 9% has been spent, according to data provided by Lesnick.

About $4.4 million was allocated to homelessness prevention, with nearly 17% spent.

In addition, about $1.3 million is still available through the Coronavirus Aid, Relief and Economic Security Act's community service block grants.

Slow distribution nationally, Saadian said, has happened in some cases because documentation requirements were too burdensome. In others, landlords wouldn't accept the money.

"That's a big issue that people are facing," Kendall Lewellen, managing attorney at the Center for Arkansas Legal Services, said of the situation in Arkansas. "We're seeing that a lot of housing providers are not willing to accept rental assistance, and that might be the tenant's only way to get caught up."

Landlords might not accept the payments because of requirements not to evict, or unwillingness to accept partial payments of rent owed, Arkansas experts said.

The Human Services Department's Franklin said that problem isn't one she's heard from providers distributing rental assistance. Under the new program, the state is working proactively to communicate with landlord groups.

New guidance from President Joe Biden's administration says that if landlords won't accept the payments from the government, then money should go directly to the tenants.

Despite the current federal ban, Arkansans are still being evicted, according to advocates.

As of Friday afternoon, about 1,875 cases had been filed under Arkansas' unlawful detainer law this year, according to an Arkansas Democrat-Gazette analysis of online court data. Unlawful detainer is the most commonly used type of eviction in Arkansas.

That number doesn't reflect the total number of evictions filed because it doesn't include filings under other statutes, and not all counties' courts post their cases online.

In some eviction cases, the tenant has filed the proper paperwork for the CDC moratorium to apply. Judges have issued an order to evict, with a stay until a date after the CDC's ban is expected to expire, Lewellen said.

In other cases, courts move hearings to a date after the eviction ban's expiration date, Lewellen said.

Lewellen said the center has seen elevated numbers of eviction cases since the pandemic began. Arkansas Renters United's Sealy said his group also regularly deals with more evictions now than before the pandemic.

"A lot of people didn't know about the CDC declaration until we told them about it," Sealy said. "Some landlords ignored it; some tore it up. ... In some cases, when something went to court, it did stop an eviction, and in others it didn't."