Council divided on future of dam 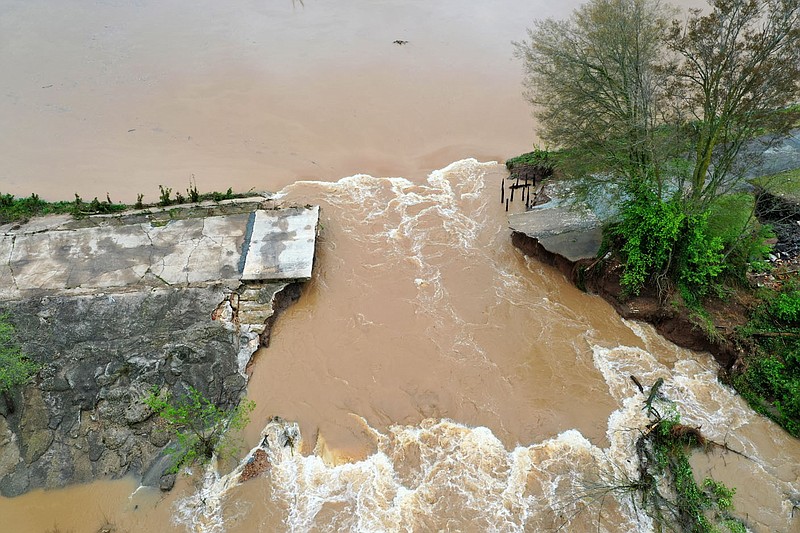 A section of the dam that creates Lake Bella Vista is seen washed away from recent storms. The break is in a section of the dam between to concrete overflow. The main dam gate and over flows became blocked by debris created during the storm. Go to nwaonline.com/210517Daily/ for today's photo gallery. (File Photo/NWA Democrat-Gazette/Spencer Tirey)

BENTONVILLE -- City Council members remain split on whether to rebuild the Lake Bella Vista dam, but for now the city at least needs to stabilize it, officials said.

Floodwater washed out a new area of the dam April 28 as a lawsuit over its fate sits before the Arkansas Court of Appeals. City Attorney George Spence said he doesn't expect the Court of Appeals to render a decision this year.

The dam was first damaged during flooding in 2008. It was topped again by flooding in 2011, 2013 and December 2015. Lake Bella Vista Park is closed, according to the city.

The city contracted with the Watershed Conservation Resource Center for up to $19,500 to help stabilize a 50- to 60-foot hole in the dam, Matlock said. The resource center has done stream bank restoration in the area that helps during the flooding, he said.

Work with the Watershed Conservation Resource Center only deals with stabilizing the dam, not whether it should be rebuilt, he said.

The city is working with Benton County and the Arkansas Department of Emergency Management to document the most recent damage, Matlock said.

Benton County Judge Barry Moehring signed an emergency disaster declaration May 5. Bentonville listed $589,400 in damages including an estimated $358,878 to Lake Bella Vista and the dam, according to information the city provided to the county.

The declaration allows the county and affected cities to request assistance from the Arkansas Department of Emergency Management for uninsured public sector damages attributed to the storm and to repair structures to pre-disaster conditions.

"I favor a permanent solution rather than a temporary fix," she said a few days after the flood. "Safety first and an economical, but meaningful, solution for the future that positions the area to be a destination spot for families and visitors."

Councilman Chris Sooter said city officials need to let the Federal Emergency Management Agency weigh in on the new damage. Sooter said he voted to support a free flowing stream as a member of the Parks Board and City Council. Sooter said he didn't't feel it was productive to comment further while the appeals process plays out.

Councilman Octavio Sanchez said the city needs to wait on the legal decision about the dam. Depending on that result, the city will have to decide on the three options: rebuild the dam, remove the dam or some sort of hybrid solution, he said.

"Some time ago, I was in favor of rebuilding the dam; today I'm more inclined to removing it, but not totally convinced about it," Sanchez said.

Council members Tim Robinson and Aubrey Patterson said they are in favor of a free-flowing stream. Robinson asked a few months back at a City Council meeting why the city couldn't remove the dam while it waits for legal issues to be resolved.

"At the time, I was told there would need to be big, costly upstream remediation if we were to do that so it wasn't worth it," he said. "Now that Mother Nature removed the section, I see no choice but to remove the rest of the dam while we wait as anything upstream will happen regardless of what we do, and it's dangerous in its current state."

Patterson said a majority of residents she has spoken with want to restore Little Sugar Creek.

"I support moving forward with the removal of the remaining portion of the dam as soon as possible," she said.

Councilman Bill Burckart is steadfast the city needs to rebuild the dam. Scrutinizing the paperwork signed to take responsibility over the dam proves that, he said. The project should have already been taken care of, he said.

In the agreement there were 10 numbered paragraphs listing the understanding between the parties as to any covenants, conditions, agreements and any representations made. This was to be sure any reasonable person could read this agreement and understand the intent of the parties involved, Burckart said.

One part of the agreement states: "The grantee (city) agreed and promised that in the event of damage or destruction the grantee (city) shall repair or replace the 'Bridges,' 'Dam,' 'Trails and Playground,'" Burckart said.

The city needs to keep its promise, he said.

The lake is formed by aman-made dam on Little Sugar Creek. After the flooding in 2008, the city planned to rebuild and improve the dam, according to the lawsuit.

Bentonville filed a lawsuit against Cooper Realty and the Trailblazers in May 2019. The lawsuit asked a judge to decide what rights the city had in regard to the property and whether any agreements limit the city in rebuilding or removing the dam.

Some residents and naturalist groups asked the city to remove the dam and restore Little Sugar Creek to a free-flowing stream. Residents called the dam an eyesore, a hazard and a liability to the city.

Cooper Communities wants the city to rebuild the dam and maintain the lake, according to the lawsuit. Cooper, which developed Bella Vista as a retirement community, claimed the conveyance of the property to the Trailblazers and later to the city was conditioned on the dam being maintained and, if necessary, building a new dam to maintain Lake Bella Vista.

"CCI does not support the creation of a free-flowing stream," John A. Cooper III, Cooper Communities president, wrote in a letter dated Aug. 7, 2018, to then-Bentonville Mayor Bob McCaslin and the council. "The principal reason is that since 1965, CCI has sold over 36,000 Bella Vista homesites to CCI's customers, particularly to residents of Old Bella Vista in the immediate area of the property, many of whom still live in the community and expect Lake Bella Vista to be preserved."

Benton County Circuit Judge John Scott ruled in August the decision rests with the city whether to repair, replace or remove the dam. The case has since been appealed to the state Appeals Court.