Arkansas to host, earns No. 6 seed 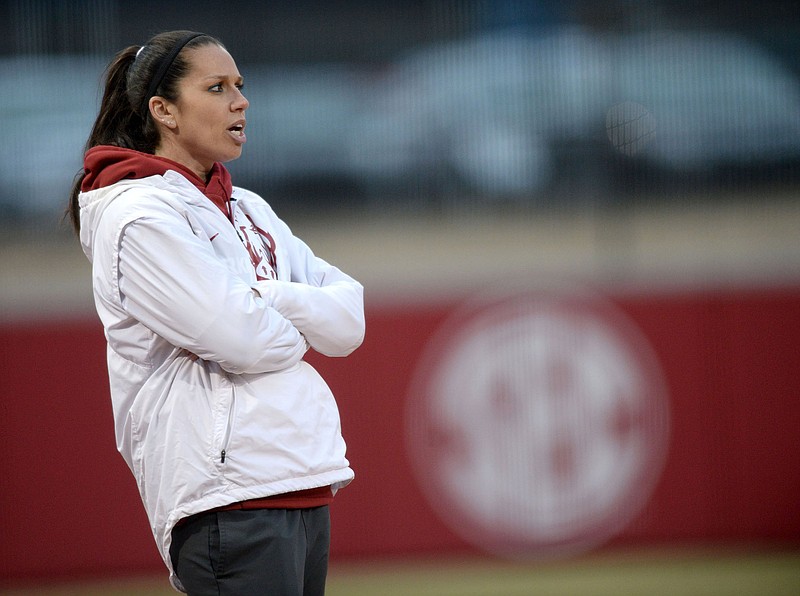 Arkansas softball Coach Courtney Deifel said she is pleased with how the Razorbacks have found different ways to win as a team this season. “It’s not relying on one so much, although we’ve had a few who are obviously incredibly steady,” Deifel said. “But it is someone different every day, and I think that’s big.” (NWA Democrat-Gazette/Andy Shupe)

FAYETTEVILLE — University of Arkansas softball Coach Courtney Deifel said the feeling was different watching Sunday’s NCAA Tournament selection show knowing the Razorbacks were a lock to be in the field.

But it wasn’t any less exciting when the Razorbacks’ name came on the screen with Fayetteville hosting a regional for the second time in school history.

Arkansas (40-9), which earned a share of its first SEC regular-season title, earned the No. 6 overall national seed. The Razorbacks could also host a super regional if they advance.

“It’s what you work so hard for all year and I’ll tell you the feeling’s a lot different tonight than the feeling the first couple years when we were hoping to see our name,” said Deifel, who is in her sixth season at Fayetteville. “Tonight, you’re watching the screen around the girls and just knowing that it’s gonna be up there and really hoping it’s gonna be in that top eight.

“We felt like we have a body of work that earned that, so just seeing that six [seed] was really incredible. … It’s gonna be an exciting postseason because these regionals are incredibly strong. And it’s gonna be some really good softball.” Arkansas will play the opening game of the regional in Bogle Park at noon Friday against Manhattan, the Metro Atlantic Athletic Conference Tournament champion. The Jaspers (22-14) came into the conference tournament as the No. 6 seed but got hot at the right time and earned the conference’s automatic bid.

The Fayetteville Regional is matched up with the winner of the Tucson Regional. It includes host Arizona, the No. 11 overall seed, along with Ole Miss, Villanova and Maryland-Baltimore County.

Deifel said the coaching staff began scouting work on Manhattan only minutes after seeing the bracket, but they don’t know much about them initially. But that’s not the case about the other teams coming to Fayetteville.

“South Dakota State came in here either last year or the year before, and they’ve done an incredible job of continuing to get stronger every year,” Deifel said. “They are playing really great right now. And Stanford’s hot.

“We were talking with our coaches, Stanford’s playing their best softball right now as is South Dakota State. It’s gonna be interesting. We have our work cut out for us and we’re ready for that.” First baseman Danielle Gibson, a second-team all-SEC selection, said the chance to stay at home for the postseason is a great feeling.

“To be home, sleep in your own bed and have your family here in the stands, it’s a heartwarming feeling,” Gibson said. “To play freely almost. I think this team plays just as well on the road, so I wasn’t really worried if we weren’t gonna be called in the top eight [seeds]. But I’m really excited to stay at home.” Attendance will be limited to 50% capacity because of covid-19 protocols for all postseason games, but Deifel said that’s not an issue.

“We would want a full Bogle if we had a choice, but I do think that Razorback fans at 50 percent are gonna be louder than a lot of places at 100,” Deifel said.

All-SEC infielder Braxton Burnside is expected to be ready for action this weekend, Deifel said. Burnside, who ranks second in the country with 24 home runs, missed the Razorbacks’ SEC Tournament game against Tennessee with an undisclosed injury.

“She’s doing better every day,” Deifel said. “We’re optimistic and we’re feeling like she will be ready to go on Friday.” The Razorbacks will be making their 10th NCAA Tournament appearance, all since 2000. They were the No. 13 overall seed, and went undefeated in winning the Fayetteville Regional in 2018 before falling in the super regional to Oklahoma.

Arkansas lost 1-0 in the SEC Tournament quarterfinals to Tennessee on Thursday, but Deifel said the team had a great attitude of focusing on this week’s task at Sunday’s practice.

“There was a great energy about them, this really great vibe,” Deifel said. “… Everything that they kind of brought to the table today was ‘we’re not looking back, we’re looking forward.’ We took that a couple different ways.