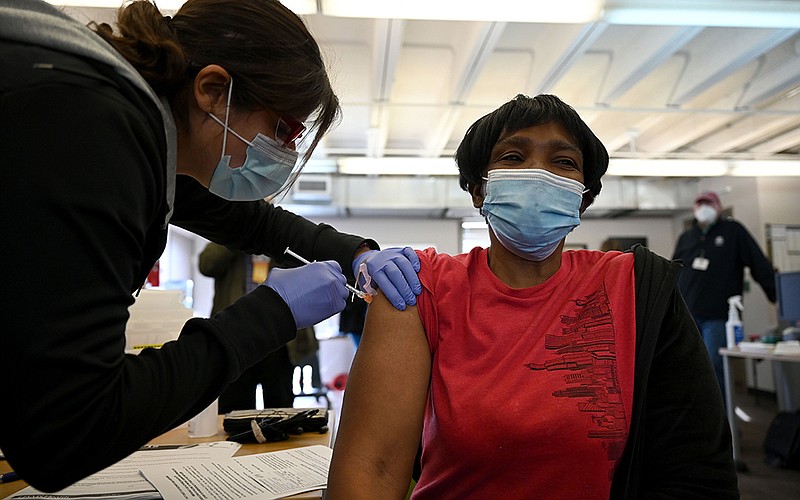 Barbara McDonald, APRN, Left, gives a dose of the COVID-19 vaccine to Iilene Johnson at Jericho's Way in Little Rock, on Monday, March 22, 2021. The shelter partnered with UAMS to provide 100 doses of the Johnson and Johnson vaccine to the homeless. Jericho’s Way is the only day resource center in Central Arkansas for those who are homeless. While the homeless population has been deemed among the most vulnerable during the pandemic, they have not been prioritized in terms of receiving the vaccine, according to a press release. (Arkansas Democrat-Gazette/Stephen Swofford)

The Arkansas Department of Health reported 95 new coronavirus cases as of Sunday afternoon.

Active covid-19 cases dropped by 58 on Sunday, down significantly from the previous Sunday though still higher than at any point in April, according to the Health Department update.

The department reported 2,058 active cases as of Sunday. Active cases stayed below 2,000 for the entire month of April.

Hospitalizations rose by five on Sunday, to 171 patients. Of those, 30 were on ventilators, an increase of three from Saturday.

Another Arkansan has died from the virus, according to the Sunday update, raising the official death toll from covid-19 in Arkansas to 5,794.

Another 3,447 doses of vaccine were administered, with 1,674 more Arkansans becoming fully vaccinated.

"This week should provide a bump in our vaccination numbers as more Arkansans aged 12-15 get vaccinated," Gov. Asa Hutchinson said via social media Sunday afternoon. "It’s safe, effective, and our best weapon as we continue to battle this virus."