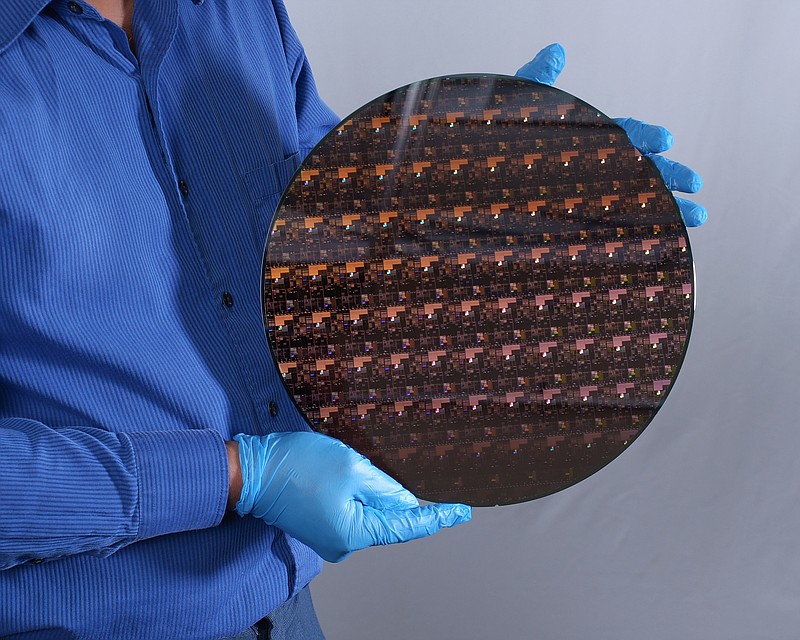 IBM's two-nanometer microchips were built onto a wafer at its research lab in Albany, N.Y. MUST CREDIT: IBM

IBM says it has created a computer chip with components measuring just two nanometers across, about the width of a strand of DNA, in a move hailed as a breakthrough in semiconductor manufacturing.

The microscopic chip parts -- there are 25.4 million nanometers in an inch -- could lead to improvements across virtually every electronic device that includes them since smaller components tend to equal faster performance and lower energy use.

Computer chips powering most new devices today have transistors that range from five nanometers in premium smartphones to 10 nanometers in some PCs. But imagine only needing to charge a smartphone every four days or doubling a laptop's speed with little added cost thanks to the next generation of computer chips.

IBM says that reality may be about five years away thanks to the achievement, which was announced recently by the company's research lab in Albany, N.Y.

"It's a remarkable feat of engineering," said Dario Gill, senior vice president and director of IBM research. "You will see it first in lower-end devices such as laptops and cellphones, then later in high-end mainframes that power the world's financial systems. It will appear in self-driving cars, in our appliances and our computers of every possible kind."

The tech conglomerate says its new two-nanometer breakthrough may improve computer performance by 45 percent or lower the energy use of the same devices by 75 percent compared with its current seven-nanometer alternative.

IBM's key innovation lies in its ability to shrink electronic switches known as transistors so that more of them fit onto a computer chip, which are a wafer of semiconductor material. Computer chips make dumb devices smart through complex circuitry. Increasing the number of transistors on a computer chip can make computers run more efficiently.

Every couple of years, tech companies such as IBM, Intel and Samsung have found new ways to pack additional transistors onto computer chips under what's known as Moore's Law -- the idea that the number of transistors that can be placed on a chip doubles every two years. The added transistors, typically measured in nanometers, allow devices to get better over time.

For now, IBM's two-nanometer transistors serve as a proof of concept, showing that smaller, more powerful chips are indeed possible despite analyst concerns that the age of doubling chip densities might be reaching an end as the tech pushes the limits of what seems physically possible.

The microscopic size of the development is difficult for the mind to grasp. "Human hair is 10,000 nanometers, so that gives you a sense of how tiny these features are," said Arvind Krishna, CEO of IBM, in a Washington Post Live interview earlier this month.

IBM says it can fit 50 billion of them on a silicon chip the size of a fingernail. At its research lab, it built the two-nanometer tech onto a round, 300-millimeter wafer. Wafers are then cut to make individual computer chips.

Developing the chip took four years, hundreds of scientists and billions of dollars. IBM, which spends about $6 billion a year on research and development, also had to invest in new fabrication techniques to build the chip layer by atomic layer, Gill said.

IBM is far from the only firm working to roll out more densely packed computer chips. The Taiwan-based chip manufacturer TSMC and Samsung are producing five-nanometer transistor chips today, and Apple has five-nanometer tech inside some of its latest devices. Intel is experiencing production delays on its next-generation seven-nanometer tech, which is now set to hit the market in 2022.

Higher-powered chips don't necessarily mean that people will pay more for devices since gadget makers can pair newer tech with some older components, according to Patrick Moorhead, a stock analyst for the chip industry.

IBM says its new chip concept might quadruple the battery life of cellphones that use the seven-nanometer process, such as the iPhone 11, Samsung Galaxy S10 and Google Pixel 5.

Demand for smaller, more efficient computer components is rising globally as tech companies seek to push out new devices with cheaper circuitry. IBM's announcement comes amid a semiconductor shortage that has ripple effects across many industries, including automotive and consumer electronics.

However, IBM's microchip project wouldn't hit the market soon enough to have much of an impact on the current conditions. IBM expects production to begin in late 2024 or 2025. IBM doesn't mass-produce the chips in house. Instead, it focuses on research and licenses its production techniques to other companies including Samsung and Intel.