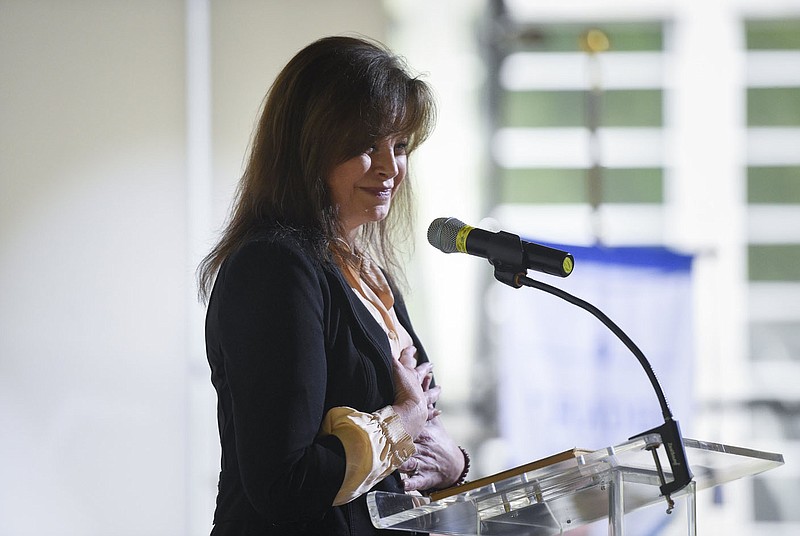 "Everything has had a first," Marsh said of the young school. "This first commencement is a biggie."

Christopher Broadus, 18, is a graduating senior and was one of the first students to attend Thaden when it opened in 2017.

He noted the historic significance of being one of the school's initial graduates.

"You're always going to be first. Nothing's going to change that," Broadus said. "You're embedded in the history of the school."

[Video not showing up above? Click here to watch » https://www.youtube.com/watch?v=CND0q5qKYLo]

Thaden opened with about 50 seventh- and eighth-grade students, Marsh said. Crystal Bridges served as the school's home for the first few weeks because the school's downtown Bentonville campus wasn't ready to host classes.

The school progressively added grades annually until its grade structure was fully formed this year with 250 students in grades 6-12, Marsh said. The private, independent school hopes to continue to grow until it reaches capacity with 525 students, he said.

An independent school doesn't rely on the government nor taxpayers for its finances and governance.

Thaden School is funded through tuition, fundraising and individual and corporate donors, Marsh said. The Walton Family Foundation has been the school's principle funder throughout its startup period, he said. The foundation reports it has provided 11 grants to the school totaling more than $6 million since 2016.

"From the beginning, we wanted to reduce financial barriers," he said. "That has allowed us to attract and build a very diverse school community."

About 35% of the school's students and 25% of its staff are people of color, according to Lisa Herschbach, deputy head of school. Students attend from about 12 cities and towns, and faculty come from about 22 states and six countries, she said.

The school has about 15 students per class, which is key to helping students exchange ideas and learn together, Marsh said.

"If you line up a bunch of people and just talk at them all day, and you don't get me engaged in the discussion, all those different perspectives don't really come in and make the intellectual chowder that we're trying to serve up here," he said.

"I know every single person that I'm graduating with," Wise said, noting she has special memories of all her classmates.

Wise recalled the experience of watching the school develop alongside other students.

"We conquered Mount Thaden, which was this giant heap of dirt. We ran up it one day during English class," she said with a laugh.

The school has added buildings since its opening, Marsh said. The Performing Arts Center is the final piece of the school's original campus plan and is scheduled to be completed in July, he said.

"It's kind of a unique experience getting to actually watch your high school being built," Wise said.

Graduating during a pandemic is also a distinct experience, Broadus said.

"That definitely took its toll in certain ways," he said, noting he didn't see many of his classmates for more than a year while he attended synchronous classes at Thaden until February.

The school transitioned to online learning in March of last school year, Marsh said. About 75% of the school's families returned to campus in October when the school resumed in-person classes, he said.

"In a year of unprecedented challenges, the Thaden School community came together to help students reach their goals," said Kim Davis, senior adviser with the Walton Family Foundation. "The school's innovative curriculum prepared the class of 2021 to thrive at some of the most prestigious colleges and universities."

The school doesn't have a valedictorian or salutatorian due to its small size, Marsh said.

Wise and Broadus are both college bound. Broadus said he'll be attending Carleton College in Northfield, Minn., to study languages, and Wise said she'll be going to Rhodes College in Memphis for urban studies. 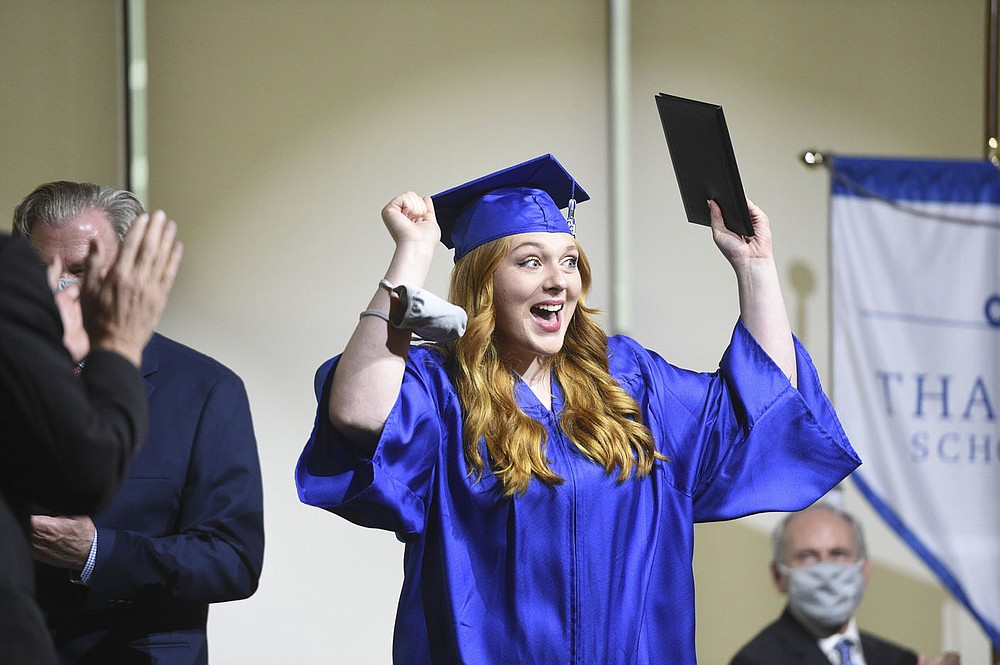 Graduate Sara Orr reacts Friday as she receives her diploma during The Thaden School graduation at Crystal Bridges Museum of American Art in Bentonville. This is the school's first class of graduates. Go to nwaonline.com/210515Daily/ for today's photo gallery. (NWA Democrat-Gazette/Charlie Kaijo)
More News

Thaden School graduates will be attending the following colleges: