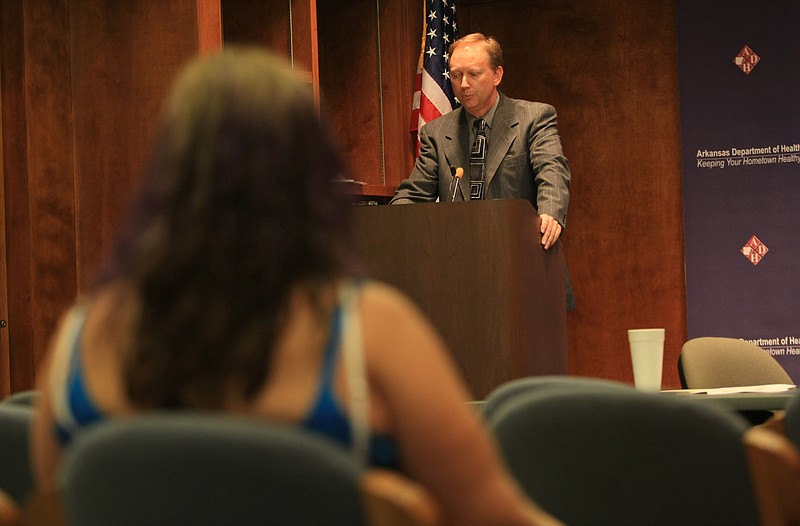 Robert Brech, then the deputy general counsel for the Arkansas Department of Health, opens the floor for comment during a hearing in Little Rock on proposed synthetic marijuana rules in this August 2010 file photo. Smoke shop owner Denise Shelton is shown in the foreground. (Arkansas Democrat-Gazette file photo)

The governor also has promoted his director of operations, Hunter Ballard, to deputy chief of staff for internal operations in the governor's office.

Brech will fill the vacancy created by Jake Bleed's departure to become the director of the state's Employee Benefits Division.

State Department of Finance and Administration Secretary Larry Walther announced his appointment of Brech on Friday.

"Robert is stepping into a job that in a normal year is one of the toughest in state government," Hutchinson said in the finance department's news release about Brech's appointment.

The Budget Division's mission has been even more difficult during the pandemic, as the division has labored to ensure every department has sufficient resources while maintaining the state's balanced budget, the Republican governor said.

"Robert's willingness to assume this challenge at this uncertain time speaks to his commitment to serve Arkansas," Hutchinson said. "Robert understands the Budget Division's key role in the day to day operation of state government, and he is up to the task."

Brech has served as general counsel of the Arkansas Public School Resource Center since 2018.

He was deputy general counsel at the Health Department from 1998-2012; the department's chief financial officer from 2012-16 and the department's general counsel from from 2016-18, according to his resume. He was a law clerk in the attorney general's office from 1996-98, owner and operator of Robert Brech Construction in Conway from 1986-95 and an avionics instrument systems specialist in the U.S. Air Force from 1978-82.

Hutchinson's promotion of Ballard, starting Monday, fills the vacancy created by the departure of Ateca Foreman.

In April, Hutchinson announced his appointment Foreman as the executive director of the Arkansas Fair Housing Commission, where she starts work on Monday.

"From the day we hired Hunter during my first year in office, his commitment to serve the people of Arkansas has been evident," Hutchinson said in a news release issued by the governor's office. "As he served in his first position as a counselor in constituent services, we saw his leadership potential, so Hunter was a natural fit to move into the role of deputy chief of staff."

With his promotion, Ballard's salary will increase from $74,999 a year to $90,000 a year, said Allison Williams, the governor's chief of staff.

"It's important to note that Hunter's position as the director of operations is not going to be backfilled. He will bring those responsibilities with him into his new role," Williams said.