As more pipeline fuel flows, too few truckers ready to roll by Compiled Democrat-Gazette Staff From Wire Reports | May 15, 2021 at 1:52 a.m. 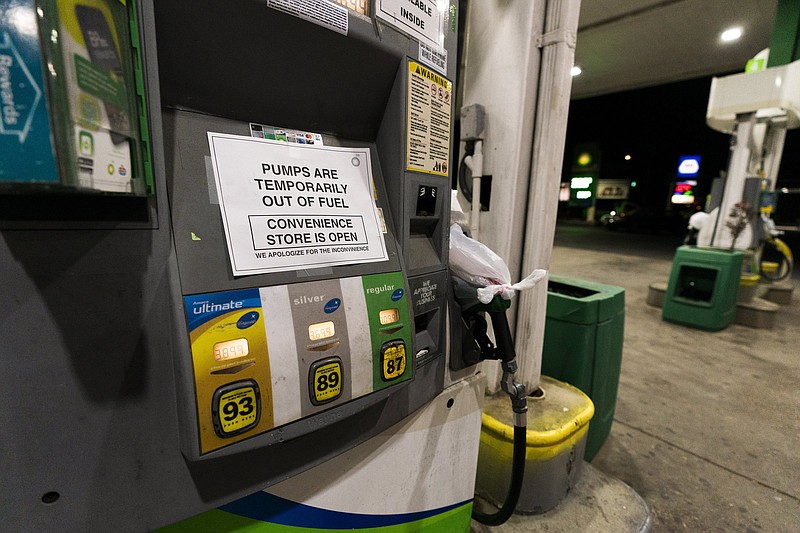 This gas station in Silver Spring, Md., was out of fuel Thursday as filling stations across more than a dozen U.S. states ran dry because of panic buying after a computer hack-induced pipeline shutdown last week. (AP/Manuel Balce Ceneta)

Colonial Pipeline Co. has resumed deliveries that were halted for nearly a week by a cyberattack, but the industry is facing a new logistics problem on top of the lack of available fuel: not enough truck drivers to transport gasoline and diesel from distribution hubs to retail outlets.

The tracking service GasBuddy.com on Friday showed that 88% of gas stations were out of fuel in the nation's capital, 45% were out in Virginia and 39% of Maryland stations were dry. About 65% of stations were without gas in North Carolina, and nearly half were tapped out in Georgia and South Carolina.

"Too many stations need fuel, not enough capacity at the rack, not enough truck drivers," Patrick DeHaan, head of petroleum analysis at GasBuddy, said on Twitter. "Most of these states with outages have continued to see panicked buying, which is likely a contributing factor to the slowish recovery thus far. It will take a few weeks."

One of North America's biggest distributors said the shortages will drag on because of the lack of tanker trucks to haul supplies.

"It's really going to be probably seven to 10 days before the average consumer really notices a noticeable improvement" in supplies, said Andy Milton, senior vice president of supply at Mansfield Energy Corp., whose closely held company handles more than 3 billion gallons of fuel a year across the U.S and Canada.

Mansfield has sent trucks to areas affected by shortages from as far away as Minnesota and Texas. "The truck itself becomes the major, the major problem," Milton said.

Many truck drivers stopped hauling fuel during the pandemic when gasoline demand collapsed. Now, companies are rushing to hire them back. As recently as last week, Pilot Corp. was offering $5,000 hiring bonuses for tanker drivers to supply its stores and said it could hire 200 people before summer.

Colonial Pipeline has started delivering fuel products to all of the markets it serves, the pipeline operator said in a statement on Thursday, but some areas may experience service interruptions during the restart process.

Hospitals, railroads and ambulance services that rely on fuel for generators are the main priority as supply trickles in, said Cheryl Waters, president of Atlanta Fuel Co., which services customers in states including Georgia, North Carolina and east Alabama. She expects it will take 10-14 days for her company's operations to return to normal.

"We're just being very careful with who we sell our fuel to," said Waters. "We're saving it back for our essential businesses."

A gas station owner in Virginia said panic buying is the problem.

"It's like a frenzy," Barry Rieger, who owns a gas station in Burke, told WJLA-TV.

Many authorities are warning of the dangers of hoarding gas.

In South Carolina, a woman was severely burned after flipping a car that a deputy tried to pull over for a suspected stolen license plate Thursday night. The fire touched off explosions from fuel "that she was hoarding in the trunk of the vehicle," a Pickens County sheriff's statement said.

A cyberattack by a hacker syndicate called DarkSide locked up computer systems May 7 at Colonial Pipeline and the hackers demanded a ransom to release the files. The hackers didn't take control of the pipeline's operations, but Colonial shut it down to prevent the malware from affecting its industrial control systems.

President Joe Biden has promised aggressive action against DarkSide. He said that U.S. officials do not believe the Russian government was involved, but said "we do have strong reason to believe that the criminals who did the attack are living in Russia."

The syndicate's public-facing dark net site went offline on Thursday, and its operators said in a cybercriminal forum post that the group had lost access to it and would be shutting down. Cybersecurity experts said that DarkSide, which rents out its ransomware to partners to carry out the actual attacks, could have taken it down to prevent Western law enforcement agencies from tracking down the rest of its infrastructure.

It also could be an "exit scam," many noted. Ransomware gangs have dissolved and "rebranded" under different names in the past when the heat was on.

Yelisey Boguslavskiy, director of research for the cybersecurity firm Advanced Intelligence, noted that the moderator of a top dark net forum for Russian-speaking cybercriminals, XSS, said Thursday that "he was officially prohibiting all ransomware-related activity and discussion on the forum."

That could suggest fears of a U.S. crackdown -- or pressure from the Kremlin. While there is no indication the Kremlin benefits from ransomware extortion, U.S. officials say ransomware gangs are tolerated by Russia's security services, which have employed some of their members.

Information for this article was contributed by Jill R. Shah, Jeffrey Bair and Jill R. Shah of Bloomberg News (WPNS); by Jacob Bogage of The Washington Post; and by Jeff Martin, Frank Bajak, Nomaan Merchant and Freida Frisaro of The Associated Press.