Bentonville library to go all in on full plan 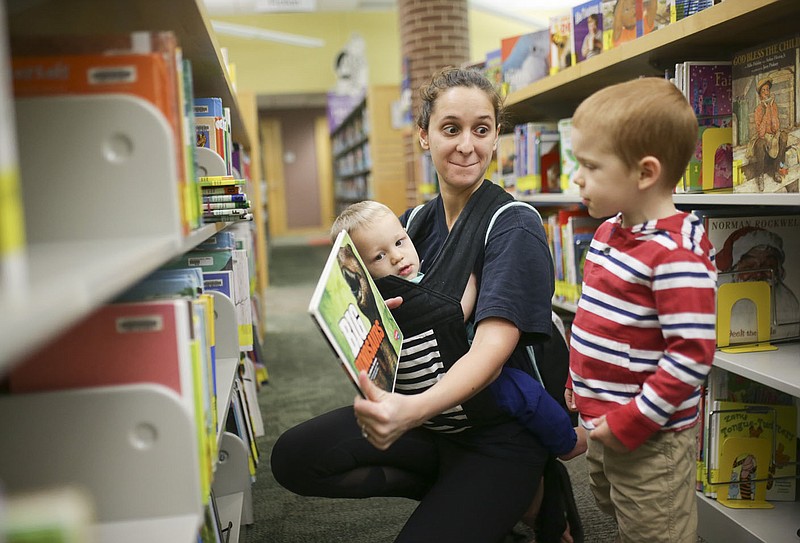 Gina Waters of Bella Vista (center) picks out books with her sons Aethan Waters, 11 months, (from left) and Kota Waters, 3, Thursday, May 13, 2021 at the Bentonville Library in Bentonville. The Bentonville Library Foundation plans to raise 10.5 million to the full needs assessment plan. Check out nwaonline.com/210514Daily/ for today's photo gallery. (NWA Democrat-Gazette/Charlie Kaijo)

BENTONVILLE -- The public library will go all in on a full expansion plan, Director Hadi Dudley said.

The Library Foundation on Monday voted to raise $10.5 million for the concept called for in a full needs assessment report, Dudley told the City Council on Tuesday night. The vote was 14-0.

The foundation in 2018 initiated a private capital campaign anticipating a building expansion, said Teresa Stafford, foundation executive director. The foundation has raised 4% -- $420,000 -- of $10.5 million in donations and documented financial support over the past two years, she said.

"The foundation's board is determined to move forward with a clarion call to the community and charitable foundations to help support the $10.5 million goal to build a library that wonderfully aligns with the culture of our diverse community that believes in lifelong learning," Stafford said. "The foundation is planning for a campaign kickoff later this year."

The foundation's goal is to have sufficient money committed to the full expansion within the next two years, Stafford said.

The foundation's board was in the quiet phase of a campaign preparing for an eventual library expansion. The foundation only met with past key stakeholders during this time to gauge interest. Some financial commitments were made by generous, supportive donors as a result, she said.

The needs assessment from Minneapolis-based MSR Design shows a proposed 65,055 square feet of new and renovated space, which includes the current 38,500 square feet, at a cost a shade under $15 million.

The library will celebrate 15 years at its 405 S. Main St. location this fall. It was a $9 million project in 2006. The library foundation raised $7 million through contributions from individuals, corporations and foundations. The city committed $2 million, Dudley said.

"The initial funding model for our 2006 library project was successful, and I believe the expansion's funding model will be successful, too," Dudley said. "Many local public/private projects demonstrate how Bentonville and the Northwest Arkansas region share, cooperate and grow together, and I am certain that the library's expansion project will reflect the community's collaborative spirit."

The library launched a six-month study last year supported by a grant from the Walton Family Foundation in partnership with the library foundation to identify growth options, Dudley said.

The needs assessment shows a site for outdoor programming with learning gardens, outdoor reading rooms, play areas and walking paths. Most of the building is well utilized, but the suggested changes include more study rooms, updating and expanding the children's area and adding a centrally located activity room. There's also a need for an additional meeting room for 300 or more people, according to the assessment.

The library will receive $4.97 million from a $266 million bond issue for capital projects and bond refinancing that voters approved in March.

The city hopes to get the design work for the library done with money from the first bond. The money should be available this summer. The city will issue the bonds in three or four series, said Jake Harper, city director of finance and administration.

Work on the library to be paid with bond proceeds includes a 6,400-square-foot addition and renovating 10,000 square feet of the interior.

The needs assessment revealed the community would like to see a full expansion in excess of what the bond provides, Stafford said. The board voted unanimously to move forward with intentions to negotiate major gifts significant enough to cover the $10.5 million needed for the full expansion, she said.

"We have our work cut out for us, but we believe the $15 million full expansion will best serve everyone in the Bentonville community over many years," Stafford said.

Councilman Octavio Sanchez said the city is fortunate to have the support of organizations such as the library foundation.

"The library foundation saw an opportunity to greatly and favorably impact the quality of life in Bentonville by assisting the city in a project that will meet the needs of the library for the next 20 years," Sanchez said.

"Our Bentonville Public Library truly serves our entire community regardless of age, skill, gender, income, ethnicity or education. It is one of the spaces in our town that offers something for everyone," said Angie Bailey, CEO/co-founder at Best in Class Suppliers and foundation member.

The library foundation purchased two adjacent lots located north of Southwest Fourth Street in 2010 with intentions of supporting the library's future growth. The foundation conveyed the parcels to the city for $1 in November as a contribution to benefit expansion plans, Dudley said.

In October, the City Council unanimously approved an agreement with the Charles H. and Marilyn S. Turner Revocable Trust and Lawrence H. and Linda J. Hawkins for $850,000, plus closing costs estimated at $9,000 and $10,000 earnest money for the purchase of 401 S. Main St. An additional $19,800 will pay for other services associated with the purchase. The property will provide greater expansion opportunities for the library, according to council documents. The money came from city reserve.

Howard Kerr, foundation board president, said the foundation is excited to enter a public/private partnership in support of the full expansion plan.

"As Bentonville's population continues to grow, the library must grow with the demands of our wonderfully diverse community," he said. 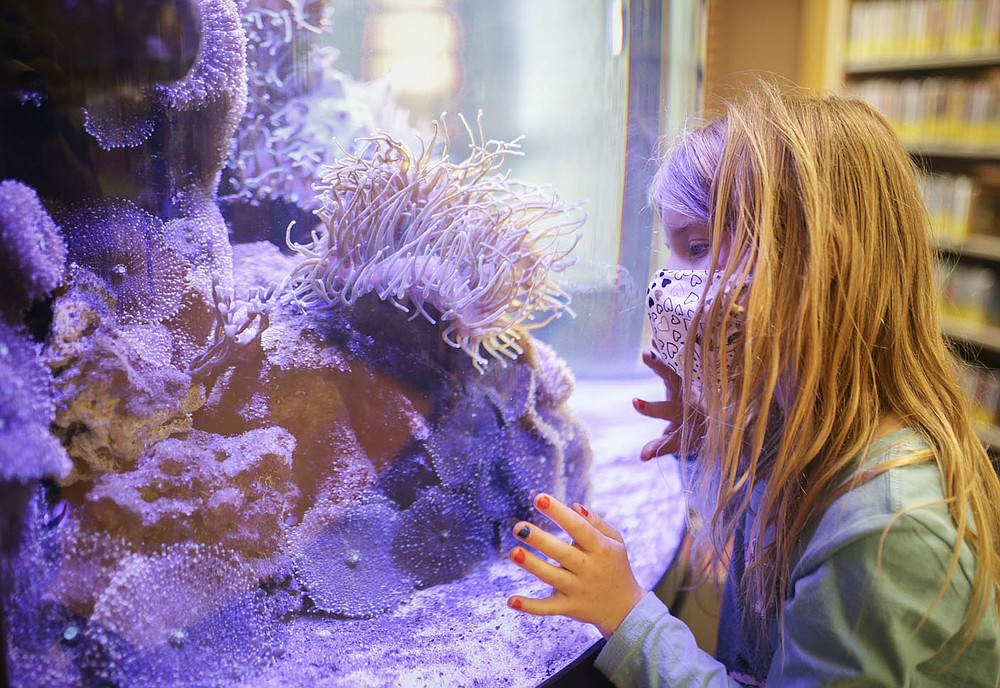 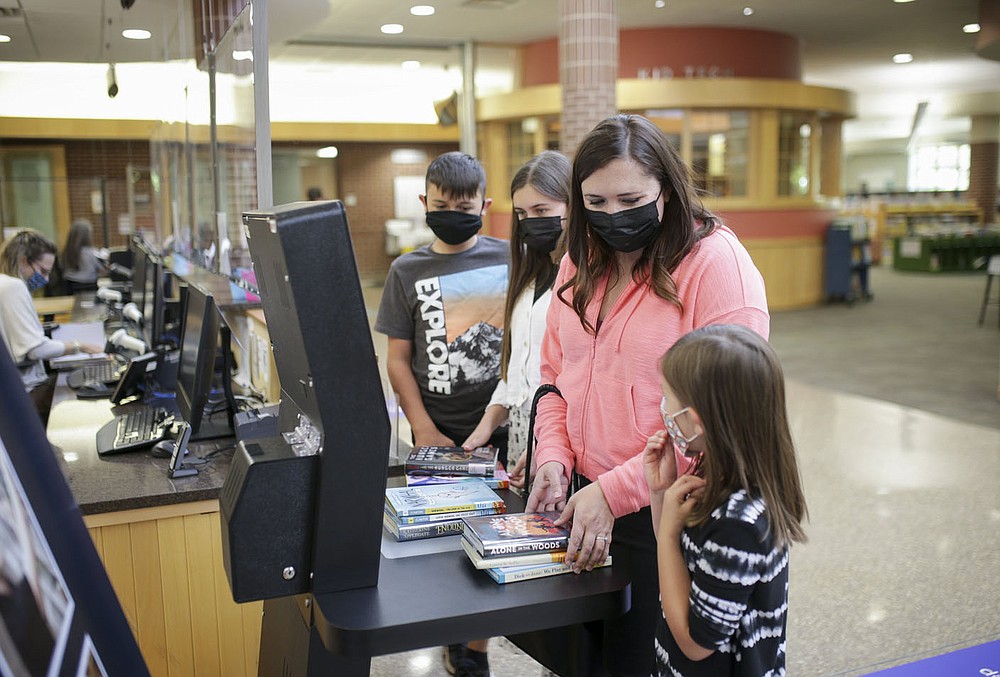 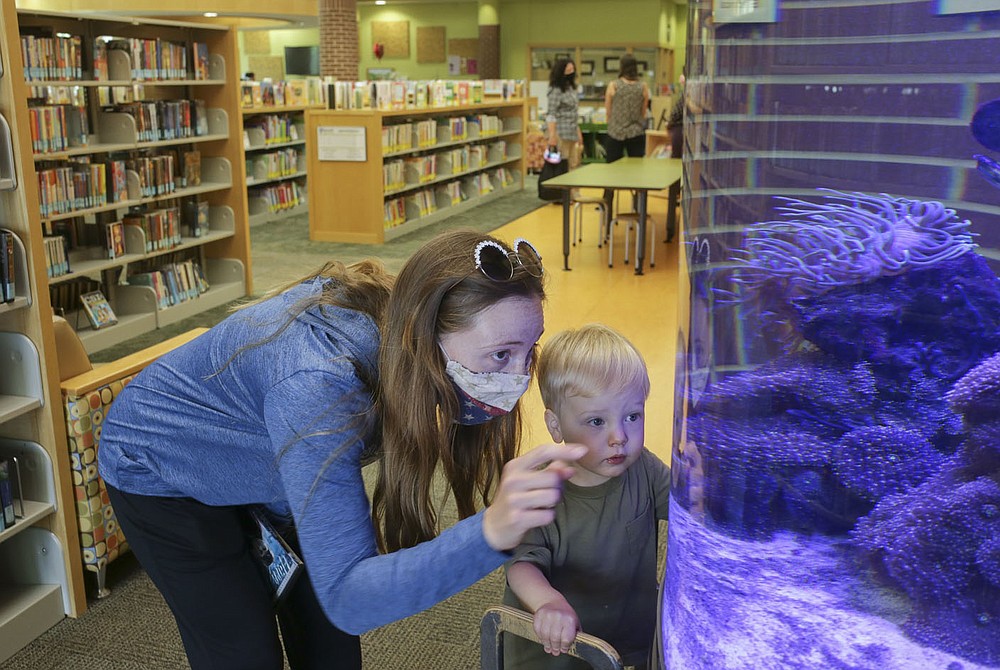 MSR’s recommendations for the Bentonville Public Library are viewable online at bplexpansion.org . Hard copies of the report are available for checkout from the library.