Crumbs Close Out Walton Arts Center's 'In The Atrium' Series 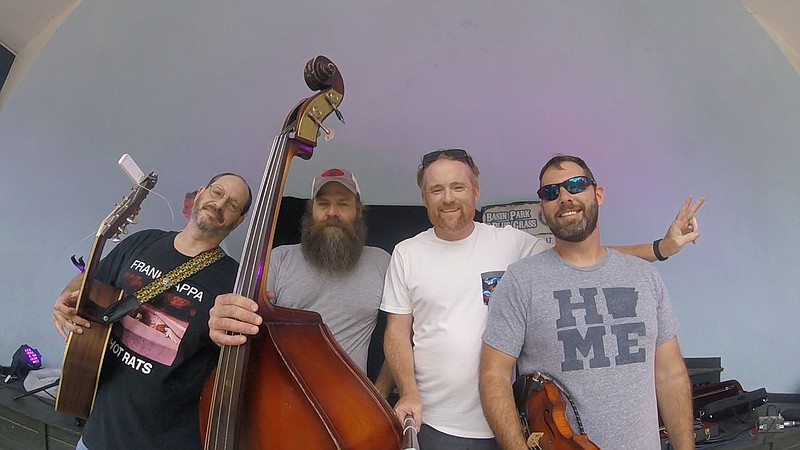 Fort Smith foursome The Crumbs could be considered a bluegrass outfit, but ask the musicians what type of music they play and their usual response is, “We play both kinds,” band member Jeff Scholtes reveals cheekily. “We love to play the songs off our three albums, especially if someone requests one of them, but we also love to play covers because, ya know, they are fun for everyone.” (Courtesy Photo)

Tonight is the final In The Atrium concert of the season. It's a series the Walton Arts Center began as a way to ease patrons back into live performance -- intimate in number, but not in proximity, with free concerts held in the lofty arts center's lobby area.

The series comes to a close during the WAC's beloved art and nature festival, Artosphere -- an event tonight's performers, The Crumbs, are all too familiar with.

"As for Artosphere, we have played in this event several times over the last few years. I think we've played in just about every one of them since the beginning," band member Jeff Scholtes shares. "They must like us because they keep asking us back! But seriously, the folks at WAC have always been so kind to us, and we are very grateful for their support."

Fitting for the festival's outdoor focus, the Fort Smith band's music tells mostly true stories about living in Arkansas, including about the beauty of the Natural State. The opening track on the most recent album, "Magic of Machines" -- the band's first new release in three years -- is called "All Over Everywhere" and was inspired by a trip on the Buffalo River. Locals will catch the references to favorite floating spots like Ponca and Steel Creek.

"As songwriters, we're always working on new material," Scholtes says. "That's the cool thing about songwriting, you're never finished writing songs. There's always new melodies and lyrics that are bouncing around in your head that you're trying to get down on paper."

Some of the tunes on "Magic of Machines," released in the fall, are brand new, and some found new life on the record after "collecting dust" for some time after being written.

"Our songs do not always take a straight path," Scholtes reveals. "Sometimes we have lyrics that were written for certain music, and maybe put that song on the shelf for whatever reason. Then later we come back to that song and find that the lyrics might work better with something completely different. We sort of recycle our material in that way. The stories in our songs are mostly true stories; those usually make for the best songs."

Keep up with show information, new releases and general band news at their Facebook page, facebook.com/thecrumbsmusic.