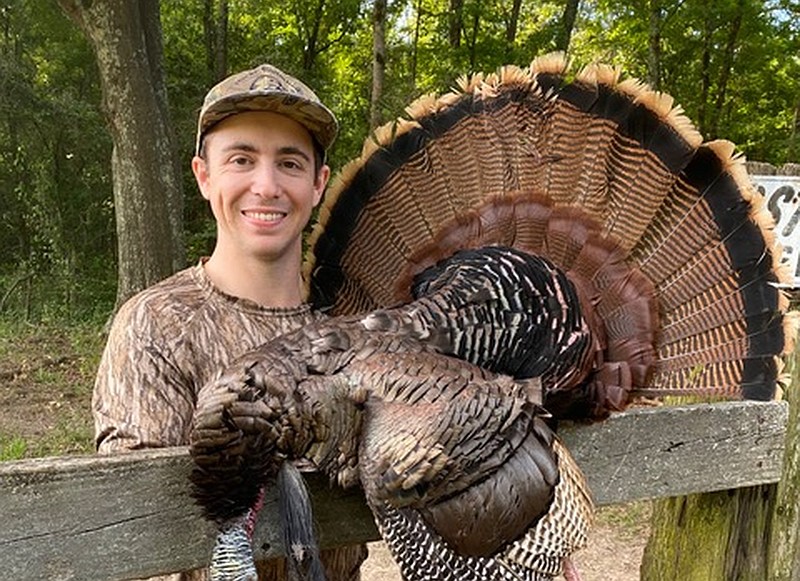 Tristan Sitzes of Benton bagged his first unassisted gobbler Saturday while hunting on his family’s farm in Hempstead County. Sitzes said it is the first turkey ever killed on the farm. (Photo submitted by Tristan Sitzes)

Tristan Sitzes of Benton made the usual heart-wrenching mistakes that all young turkey hunters make, but he kept throwing until he pitched a complete game.

The reward for his perseverance was tagging his biggest eastern wild turkey, the most challenging of the four North American subspecies. Sitzes killed it in Arkansas, arguably the toughest state to hunt, in one of the toughest areas in Arkansas to hunt, on a farm that traditionally did not have turkeys.

Sitzes said his gobbler is the first to have ever been killed on the farm, and it's also his first unassisted. Now he is neck-deep in a lifelong addiction that will test the limits of his relationships, employment and bank account.

"We've never had turkeys on the farm, so it means more to me because of that," Sitzes said.

A few turkeys have been seen on the farm in recent years, mostly in the fall during deer season, Sitzes said. Because they appeared so sporadically and because of time constraints, Sitzes could not identify roosting, loafing or dusting areas. That's the information that helps a hunter narrow down hunting places and improve the chances for an encounter.

"This year, for some reason, in the past couple of months I've been seeing them a lot out there," Sitzes said. "Not many, just maybe six or seven."

Sitzes said the turkeys seemed to prefer a particular cow pasture. It's a big hill surrounded by hardwoods with a couple of ponds. With that information, Sitzes and a partner were able to sharpen their focus.

"My plan was to hunt the edges of the field," Sitzes said. "There are some trees that come out into the field a little bit from the woods. That's where I began the hunt."

On the first weekend of turkey season, Sitzes said he saw a tom gobbling in the middle of the field. The tom was unapproachable, but Sitzes said it was bickering with a hawk in a nearby tree. The hawk was screeching at the tom, Sitzes said, and the tom was gobbling at the hawk.

"Once we saw him and saw that action, we locked in on him," Sitzes said.

On Saturday, Sitzes and his friend set up among some trees that extend into the middle of the field. No cows were present, so the hunters watched grass wave in the breeze for a couple of hours.

"We started hearing noise behind us, like a growling noise almost," Sitzes said. "We turned around, and there was a bull standing 30 or 40 yards from us. Between us and the bull were two hens and a tom."

Preoccupied with the bull, the turkeys did not see the hunters move. The turkeys strode casually into the woods and ignored the hunters' calls.

"We thought the bull scared them and that they wouldn't come back into the pasture, so we moved into the woods, a couple hundred yards down to where we thought they were going," Sitzes said. "We just thought that was their path. We sat down and made two or three little calls with a box call."

About 20 minutes later, the urgency ebbed. As often happens when the edge dulls, a gobbler appeared 10 yards from a decoy. The time was 8:30 a.m.

"His eyes were locked on the decoy," Sitzes said. "I pulled up my gun and shot that turkey within 45 seconds of seeing him. He never made a noise. Not one time."

The gobbler's beard was 11 inches long, and his spurs were 1 1/8-inch long. The bird taught Sitzes a few lessons that will pay dividends for years to come.

"I think what I learned is that turkeys have their routines, and it's hard to interrupt that," Sitzes said. "When a turkey gets out of his tree, he knows where he's going to go at least for the next couple of hours. If I'm going to be successful, I really need to think like a turkey and get in their path between Point A and Point B."

In the meantime, Sitzes is going to enjoy this moment.

"Oh, man, it was very satisfying. It was remarkable," he said. "It was fast, but it was beautiful. It was worth the last three or four years of hiking, setting up and messing up, but killing it on the family farm meant more than killing it someplace else."