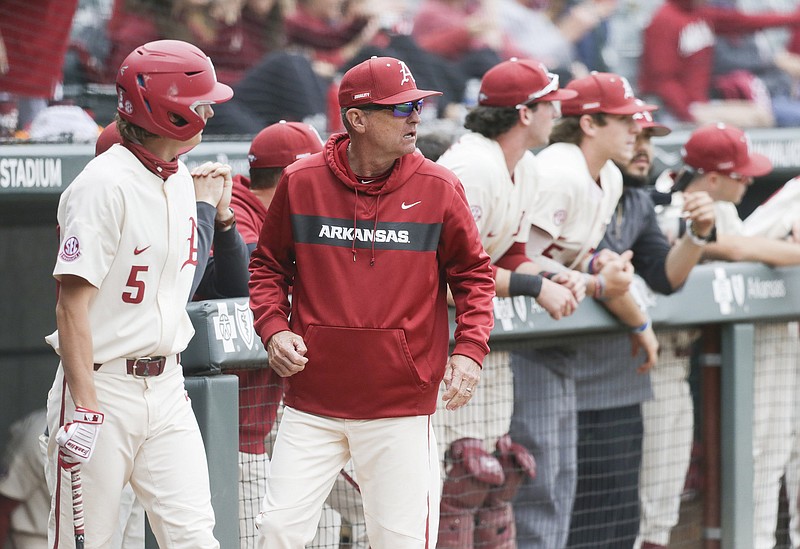 The Bulldogs held a 23-22 advantage in those SEC West matchups.

"Extremely competitive between Arkansas and Mississippi State," Raffo said. "Great ballgames and a lot of fans at both sites."

Raffo's games against the Razorbacks stopped when he was hired as Arkansas State University's coach on July 1, 2008.

Arkansas' administration had a long-standing policy of not scheduling in-state colleges in any sports.

But Raffo had hope that would change eventually after he got a phone call from Arkansas Coach Dave Van Horn.

"Dave called within a couple of days of me being hired and said, 'Congratulations, and I absolutely want to schedule you, but my hands are tied right now,' " Raffo said. "Having competed against him in the SEC, I knew he was being honest and wanted to play. He could have cared less about the political part of it.

"I never had a doubt in my mind Dave would call and schedule us when he could. I knew he'd be true to his word."

"It'll be kind of an interesting event," Van Horn said.

Van Horn, in his 19th season at Arkansas, long pushed for the Razorbacks to play in-state opponents.

In June 2020, Yurachek announced Arkansas coaches could schedule ASU and UCA as well as UALR and UAPB in all sports.

The Razorbacks already have played the Trojans, Bears and Golden Lions five times this season and are 5-0. ASU will be the last NCAA Division I team in Arkansas the Razorbacks have played.

"Players in Arkansas keep getting better, and we all want them to stay home and play for the college teams here."

ASU split a doubleheader at Oklahoma on March 14, winning the opener 15-14 and losing the nightcap 9-1, then lost to the Sooners 12-6 a day later.

The next day Oklahoma came to Baum-Walker Stadium and beat Arkansas 8-5.

"It'll be a battle. It's tough, especially this time of the year in between conference games."

ASU junior first baseman Liam Hicks went 4 for 6 against the Rebels last week, including a home run and two doubles. He scored four runs and drove in three.

Hicks is batting .398 to share the Sun Belt Conference lead, and has 5 home runs and 24 RBI.

"Liam's a professional type hitter," Raffo said. "He reminds me of a lot of hitters in the SEC -- top-end hitters. He doesn't run very well at all, so that tells you a little bit more about his average. He's not beating out infield hits.

"He puts in the time and work in the batting cage. He has a great mindset and a plan when he comes to the plate. He's been fun to watch go about his business."

Raffo's first experience playing Arkansas on the road was in 1995 when the Razorbacks swept the Bulldogs at George Cole Field. When Mississippi State next played at Arkansas in 1997 and the Bulldogs took two of three games, the Razorbacks were in their second season at what was then known as Baum Stadium.

"Going from playing Arkansas at their old place to their new place, it was unbelievable what they had done with Baum and how much they had invested in the program," Raffo said. "And of course, they've kept adding onto it over the years."

Baum Stadium was the result of the program and relationships Norm DeBriyn built in his 33 seasons as the Arkansas coach from 1970-2002, includng four College World Series appearances.

Raffo, a two-time All-American first baseman at Mississippi State in 1989-90, was heading into his junior year at Jacksonville (Fla.) Bishop Kenny High School in the summer of 1985 when he met DeBriyn in Baton Rouge at the National Sports Festival.

Only Raffo didn't know who DeBriyn -- who had just led Arkansas to its second College World Series appearance -- was at the time.

"There was a really kind gentleman handing out cleats to the players," Raffo said. "I was just excited to be playing on the Sports Festival team, and I didn't know who he was.

"I came to find out later it was Norm DeBriyn and he was the Arkansas coach. What a small world."