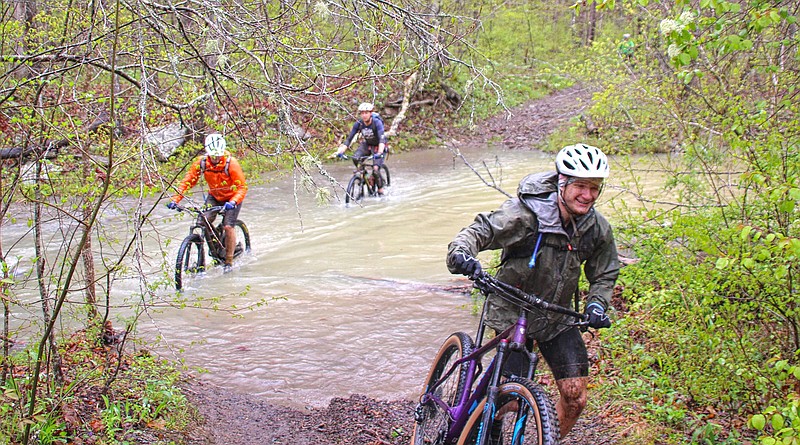 All hope of dry feet vanished as riders rolled through successively higher and higher creeks on Fire Tower Trail during the 16th annual Buffalo Headwaters Challenge. (Special to the Democrat-Gazette/Bob Robinson)

RED STAR — The annual Buffalo Headwaters Challenge has endured torrential rains, freezing weather, ice storms and assorted natural calamities dating to 2005, when Kate and How Kuff first began hosting the event at their homestead here. The tradition continued for a 16th consecutive year April 24, despite a global pandemic.

In past years, attendance has topped 500 riders — not this year.

Ozark Off Road Cyclists president David Vansandt explained that the nonprofit trails organization followed covid safety protocols from the Arkansas Department of Health and Arkansas State Parks during planning, and even after the protocols eased in February, planners followed the state's best practice guidelines:

◼️ They pushed the event from its customary January date to April. (Note: The last weekend of January had been preferred because How Kuff wanted to fit it in the open weekend between NFL playoffs and the Super Bowl.)

◼️ To avoid crowding within the close quarters of Headwaters Schoolhouse, they moved dining, registration, awards and the bandstand outdoors to a baseball field.

◼️ As an added precaution, they capped registration at 375 riders and replaced the mass start with staggered groups of approximately 30 riders.

Registration sold out, with cyclists coming in from 13 states.

Even under "normal" conditions, preparing for the challenge involves many man-hours. Spice up these preparations with covid considerations, and a forecast predicting a couple of inches of rain, and planning time doubled.

This was Vansandt's first year in charge of the event, but he kept a positive attitude.

"At least it isn't freezing rain," he reasoned.

Thankfully, the forecast was wrong about early morning precipitation Friday, April 23, and it was dry while participants began checking in at 3 p.m. This good fortune lingered, allowing everyone time to park, assemble tents and make other nesting rituals.

Once settled in with bowls of Frito chili pie in hand, everyone could stroll the grounds and visit.

Through the years, the event seems to have shifted away from being all about the ride. I still enjoy the riding part, and each year it offers an unexpected challenge. But just as important is returning to this natural setting year after year to visit with my Buffalo Headwaters family before we take on another year's Challenge.

The rain held off until the Chucky Waggs band hit the stage. By that time, with full stomachs and a mug of craft beer in hand, everyone was nestled comfortably under giant tent canopies, thankful to be sheltered from the steady trickle of water coming down.

A couple of songs into their set, no longer content to sit, we moved enough tables away from the stage to open a dance area. The wild, foot-stomping, gyrating, backwoods celebration commenced.

Participants did not have to wait long to confront the first major challenge of the 2021 Headwaters: leaving a warm, dry sleeping bag, stepping into a chilling rain, then climbing on a wet bicycle seat.

As I lingered in my bag, I ran the numbers through my head, calculating the latest possible time I could get up and still make the start of the ride, willing the rain to stop before that time arrived. However, my wish was not granted.

It had rained through the night. Even areas not covered in standing puddles were squishy. As I half-heartedly pedaled toward the start/finish area, my tires left a trail of knobby tracks in the soggy turf of the baseball outfield.

Once I pulled alongside fellow cyclists, my mood lightened. I've experienced the Challenge with many of these riders over the years. Everyone was exchanging jokes about how this day would be a walk in the park compared to other years when ice covered the trails.

With cowbells loudly announcing the start, following the staggered-start instructions I rolled out in one of the early packs.

The first mile and a half of the course routed riders up 500 feet of elevation gain, with most of the climb up a rocky, eroded Fox Hunter Road. This steep grade, along with its rain-soaked clay surface clinging to our tires in a death grip, forced most to dismount and push their bikes up the hill. Not my preferred way to warm up my legs in preparation for a long ride.

Eventually, we popped the front wheel of our bikes over a small lip bordering the left side of the gravel road onto a singletrack trail known as Fire Tower.

Two miles of a steady feast of gravity-fed downhill, supersized with tight, high banked earthen berms that wove riders — often nervously close — in and around dense, mature hardwood trees. The steep trail had weathered the overnight rain nicely. Riders were able to quench their "need for speed" and get their adrenaline fix with high speeds throughout the ride.

I'm sure this section played heavily in the International Mountain Bicycling Association's decision to declare this trail network an Epic route.

Arriving at the mountain's base, the course routed riders within the walls of a deep hollow with steep, tree-covered hillsides bordering each side. As we crisscrossed the hollow from one side to the other, we followed the trail through a dozen creek crossings.

During the early crossings, many riders tried to avoid getting their feet wet, timing their pedal down-strokes to match the places where the water was its shallowest. As we continued down the hollow, the water in the crossings rose. Eventually, everyone was pedaling straight through the streams, the only goal being to reach the opposite bank by whatever means.

As if pedaling through thigh-deep water was not challenging enough, many riders' progress was brought to an abrupt halt when they rode head-on into submerged boulders. One crossing in particular sent many riders plunging into the chilly water, thanks to a large tree trunk hiding below the surface that blocked almost two-thirds of the exit on the opposite bank.

Spirits were high as soaked cyclists continued through the picturesque hollow, laughing with those who stumbled and cheering when others successfully completed creek crossings. Many would also call out to warn following riders to veer right to avoid that submerged log.

The overnight rain produced waterfalls that cascaded down the rugged rock cliffs bordering the trail. Cyclists stopped for photo ops. Seeing them linger at a waterfall or pause to watch and encourage other riders at particularly challenging creek crossings was a reminder that the organizers promote this event as not being a race, but instead a personal challenge to enjoy however you choose.

We left the hollow by way of a long and taxing climb on Azalea Falls Trail.

This more than 3-mile ascent with 600-plus feet of elevation gain had riders leapfrogging past one another as many paused for brief recovery breaks alongside the trail. As I passed one resting rider he introduced himself, adding that he and I have been leapfrogging up these mountainsides together for the past six years.

Peaking out at the top of Azalea, riders were greeted with power drinks, cookies and energy bars at our first aid station. It was a welcome break.

Looping around the mountain and returning up Azalea Falls Trail on a second occasion, we appreciated the cookies even more.

After 23 miles of mountain biking, the route reached the Fire Tower Rest Stop. Here, keeping with tradition, riders were rewarded with the famous grilled cheese sandwich and soup.

The best sandwich ever.

It was a festive atmosphere, with a DJ pumping out tunes and with craft beer to wash down the sandwich. And if your bike had been making a lot of funny noises or you had other mechanical problems, Nate Fields from Phat Tire Bike Shop was there to help. Fields has saved many a mountain biker's outing.

Even when the bike adventure was behind us, the fun was not over. The ride was followed by a second evening of food, adult beverages, camaraderie with old and new friends, and dancing away the night to the foot-stomping boogie of the band Arkansauce.

For those seeking another challenging ride, Sunday offered a 41-mile gravel grinder, guaranteed to sap any remaining strength from weary legs.

And for the true animals who were up for even more adventure, the ticket for the Buffalo Headwaters Challenge also provided free shuttle service to the Buffalo Outdoor Center's BOC Downhill MTB Trail.

Given the past year's rough conditions, Vansandt said, planners did not want the cost of a ticket to deny anyone the experience of the Challenge. At $20 for club members and $80 for nonmembers, tickets bought five meals, two live bands, free beverages, a swag bag and even helped the event donate money to the Headwaters School. This was possible because of support from the mountain biking community, including Adventure Subaru, Phat Tire Bike Shop, Fossil Cove Brewery, Apple Blossom Brewery, Taylor Rental, KUAT Bike Rack, Trailside Coffee Co., Ozark Natural Food and Buffalo Outdoor Center.

Not to mention a cadre of volunteers.

Proving once again that "it takes a village."

At the end of the day, I was reminded how lucky I am to live in the Natural State.