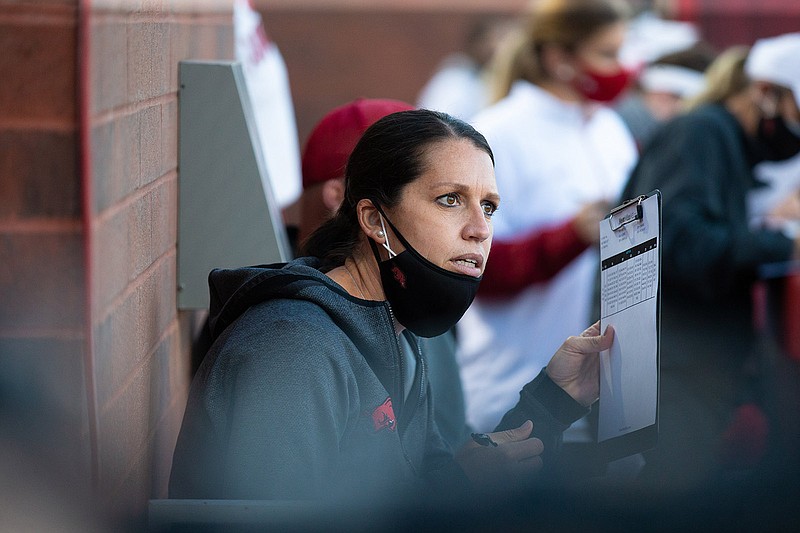 FAYETTEVILLE — Courtney Deifel saw potential for success in the University of Arkansas softball program even though the Razorbacks were coming off back-to-back losing seasons in 2015.

That’s one of the things that brought her to Fayetteville six years ago, but the All-American catcher at Cal-Berkeley still was pinching herself a day after her Razorbacks wrapped up a share of the first SEC regular-season title in school history.

“I was saying to my husband this morning, ‘Can you even believe it?’ ” Deifel said in a phone interview last week.

This season is bearing the fruit for a program that battled from the bottom of the SEC to get to the top. The Razorbacks (40-8, 19-5 SEC) shared the title with Florida after the Gators came up with a pair of walk-off home runs over the weekend to sweep Texas A&M.

Florida will be the No. 1 seed in this week’s SEC Tournament, which begins Tuesday in Tuscaloosa, Ala. Arkansas will be the No. 2 seed. Since the teams didn’t play each other during the regular season, the Gators earned the tiebreaker thanks to winning two of three over No. 3 Alabama. The Crimson Tide took two of three from Arkansas in Bogle Park.

The Razorbacks earned a bye and will play the Tennessee-Texas A&M winner at 4:05 p.m. Central on Thursday. They did not face either team during the regular season.

A strong belief in her plan and staying the course despite some criticism helped turn a dream into reality.

“To be honest, when I got here people criticized that I was too nice,” she said. “I think sometimes niceness can be mistaken for being naive. I don’t believe that. You can be nice and respectful and classy and still have a great product on the field.” She saw something when Arkansas officials called her in 2015.

“The conversations I had, I guess I could feel the support in the department,” said Deifel, who spent one season at the helm of Maryland before taking the Arkansas job. “When I came to see it, it literally felt like this untapped goldmine.” She’s hit the mother lode this season.

The Razorbacks are in the midst of a season full of firsts. The No. 6 Razorbacks have attained their highest national ranking and are poised to be a top-eight national seed in the NCAA Tournament.

“The environment has changed so much,” Green said. “Coach Deifel has instilled in us, if we want it, we can get it. “She’s made our belief in ourselves so much bigger than it used to be. And our confidence on the field is so much better.” The junior from Temecula, Calif., said it’s up to the veteran players to deliver Deifel’s message.

“We trust Coach Deifel and what she’s doing with this softball program,” Green said. “It’s our responsibility to kind of spread what Coach Deifel is wanting to do here.

“It’s not all on Coach Deifel. It’s her having the impact on a majority of us and us buying in and getting others to buy in.” The 40-year-old mother of two has turned down other coaching opportunities in recent years to remain in Northwest Arkansas. Deifel didn’t want to discuss specifics, but she said her family is comfortable in Fayetteville and that means a lot.

“It’s not just what I want to do, but what’s best for my family,” she said. “It’s really special to get to build something that’s your own. It’s special to have the opportunity to see that through and make it your own.” The Razorbacks finished 1-23 in the SEC in Deifel’s first season. They had the biggest turnaround in the country among Power 5 programs the next season by going from 17 victories to 31. It also resulted in the first of three consecutive NCAA Tournament berths.

Deifel credits Oklahoma Coach Patty Gasso with changing her mind about getting into coaching. She served as a graduate assistant in 2008-09 on Gasso’s staff simply as a vehicle to get her master’s degree.

“She asked me, ‘Do you wanna coach?’ ” Deifel said. “I said, ‘Nope, I just want my master’s.’ “ But when the team’s pitching coach was out on maternity leave during Deifel’s second year at Oklahoma, she filled in for a time. That changed her perspective.

“I loved it,” Deifel said. “I love the strategy. I love that piece of it. It was in that second season I thought, ‘Yeah, this is what I think I want to try to do.’ I attribute that a lot to that staff at Oklahoma.

“That’s what really opened my eyes to coaching, just the influence you can have. You get to have a huge hand in growing them up. They changed my perspective to really what coaching is.” Coaching is in Deifel’s blood.

Her father, Ron Scott, has racked up more than 1,000 victories and is just 10 away from becoming the all-time winning coach in California community college baseball history. He’s in his 33rd season at Fresno City College. Her sister, Amanda, is the head softball coach at the University of Missouri-St. Louis.

But even her father didn’t believe Deifel would follow that path.

“If you would have asked me a week after she left Cal, I would have said, ‘Courtney’s not gonna coach,’ ” Scott said. “I thought she was burned out.” Scott got a little emotional talking about his daughter.

“I’m not surprised at what she’s done at Arkansas because of who she is and her determination,” he said. “I’m a little overwhelmed at how well she’s done.” The 67-year-old admitted he’s ready to spend more time with his grandchildren and watch his daughters coach. That time’s coming soon, he said.

“In the meantime, I’m just, from a distance, admiring what she’s done,” Scott said. “It’s really a fun time of the year and a fun dynamic as a father.”