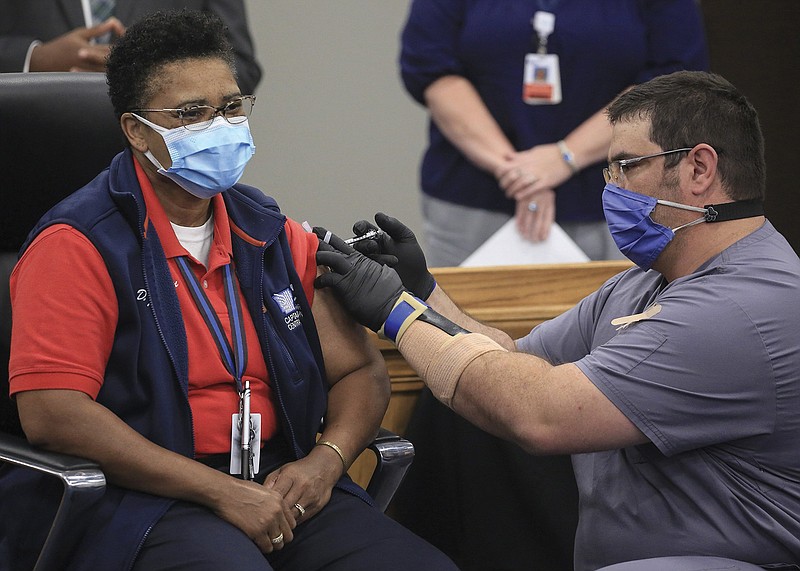 Most Arkansas prison workers haven't been vaccinated against covid-19, leaving thousands in state lockups more vulnerable to the pandemic.

Of more than 4,700 Arkansas Department of Corrections employees, an estimated 42% have received at least one shot, an agency spokeswoman said. The agency's leader set a goal of vaccinating 80% of employees after shots were offered on Jan. 5.

Sluggish vaccination rates for prison employees raise questions about the prison system's ability to ward off disease during the pandemic's next phase and against more-contagious viral variants, say public health and incarceration experts.

As of May 1, Arkansas' infection rate among prisoners was the third-highest among states, according to data compiled by the Marshall Project, a nonprofit criminal-justice news outlet. State prisons continue to see new virus cases, with five sites reporting new cases since April 15.

Department of Corrections communications director Cindy Murphy didn't answer questions from the Arkansas Democrat-Gazette about why officials think covid-19 vaccinations lag among workers. In a statement, she said the agency has been affected "more than most" institutions in the state and that workers had "stepped up once again" to receive shots.

She said the vaccination rate for prison workers outpaces the rate for the state population overall and that the agency ran a "robust" vaccination campaign, "featuring the slogan 'Our best shot to get back to normal.' The campaign includes posters, fact sheets, emails and vigorous social media messaging that includes daily posts featuring photos of employees receiving the vaccine," she wrote.

As of last week 7,438 prison inmates, or about 47% of the total population, had received their first vaccine dose, agency statistics released under public-records law show.

In interviews, public-health experts said vaccinating staff members is as important as providing protective shots for inmates. Incarcerated people are "at the mercy" of the staff's choice to be vaccinated, said John Hart, a senior research associate with the Vera Institute of Justice's Restoring Promise initiative in New York.

Staff members are more at risk of exposure in the community, and then unwittingly touching off outbreaks in detention centers by working while infected, said Nick Zaller, a professor at University of Arkansas for Medical Sciences' Fay W. Boozman College of Public Health.

Prisons aren't "closed spaces -- people are coming in and out," he said.

[Interactive map not showing up above? Click here to see it: arkansasonline.com/59workvax/]

Secretary of Corrections Solomon Graves also has said asymptomatic staff members were the most significant source of infection for the detention system, the newspaper reported in January.

Department of Corrections employees don't have a formal process to tell their employer why they aren't vaccinated. The agency doesn't keep facility-specific data on where unvaccinated employees work, Murphy said, meaning officials don't know where shot shortfalls are greatest.

The agency can't require the shots. A new state law, Act 977 of 2021, took effect last month and prohibits state agencies from requiring their workers to be vaccinated without seeking special permission from the Legislature.

The legislation was among a spate of bills considered during this year's session meant to curb state and local entities from requiring certain public-health measures, such as mask-wearing.

It wasn't clear if problems with vaccination reluctance among prison staff members extended to jails in the state's most populous counties. Faulkner County, which last week reported more than 90 positive cases in its jail, didn't answer a public-records request for that information. Pulaski County has vaccinated 84 of 262 jail employees -- about 32%.

Sebastian County and Benton County don't track whether deputies and other jail workers were vaccinated, officials said in emails.

The Washington County sheriff's office is hovering at about 56% of 284 employees vaccinated, according to figures provided by public information officer Kelly Cantrell late last month. She said it's difficult to gather an exact percentage because the number of employees fluctuates often.

The office offered on-site shot clinics and workers also have the chance to get their shots during work hours.

"We have a duty to do what we can to protect them [inmates] both from physical harm and from any medical issues," said Jay Cantrell, a chief deputy at the department.

Staff members at Arkansas' youth lockups have a much higher vaccination rate -- about 85% overall. As of Wednesday, 222 of 259 employees had been partially or fully vaccinated.

The Arkansas Juvenile Assessment and Treatment Center at Alexander has the highest rate of the four lockups at about 99%, according to figures provided by the state Department of Human Services.

Executives for Rite of Passage, the company that manages the facilities, attribute the high rates to a concerted educational effort to encourage employees to get vaccinated. The company created a video called "Be a Lifesaver" that featured staff members talking about why they got vaccinated, posted leaflets in facilities and asked facility leaders to encourage vaccinations, said Amy Ast, regional compliance officer for the company.

There also is a trusted physician available to answer questions, she added.

"We have a contract with an infectious disease physician that we've utilized throughout the pandemic so the staff is familiar with him," she said.

Two staff members from the Alexander facility have died of covid-19, which director Jasen Kelly thinks also pushed employees to get vaccinated.

"That was eye-opening that covid is real, and I think that was a motivating factor as well that our staff had an opportunity [to prevent spread]," Kelly said.

The facilities are moving on to vaccinating eligible children in their care. Few consent forms from parents for those 16 to 17 have come back. Some of those 18 and older have agreed to be vaccinated, Kelly said.

Data from The Sentencing Project, a Washington, D.C., group that advocates for minimized sentencing, show there have been at least 4,000 infections among residents of youth lockups nationwide. The data likely is incomplete, said Joshua Rovner, a senior advocacy associate who compiled the information.

"These are people working in congregate care settings," Rovner said. "Social distancing is basically impossible most of the time. ... We certainly recommend that staff should be vaccinated for their own safety."

Apart from staff members, Arkansas recently began giving incarcerated people the two-shot Moderna vaccine, Graves said at an April 13 news conference. He said 719 doses had been administered and he expected the campaign to vaccinate 7,454 inmates by May 19.

Kaleem Nazeem, a board member at DecARcerate, said although vaccinating prison employees is important for the health and safety of inmates, he's been largely focused on vaccine availability for inmates, as have his friends who are incarcerated. DecARcerate in Little Rock is a grassroots organization that advocates for the rights of prisoners.

Prisoners have told Nazeem that they're offered only the Johnson & Johnson one-dose shot, and that the offer was after the three-week period when the vaccine put on pause while health experts investigated a few cases in which shot recipients developed blood clots.

Experts have since determined risk is low with the vaccine and it's again being distributed.

For Dewonna Isabell of Jonesboro, the pandemic has been a time of increased worry and prayer for her loved ones who are incarcerated. Her boyfriend is in prison at Tucker, and her cousin's child, whom she raised and refers to as her son, is at Grady.

She said earlier in the pandemic, her son had to move to a different part of the prison because some other men on his unit contracted the virus.

"I pray a lot, so it was more of me getting more concerned that he stays healthy and free from it," she said. "I don't know how they treat them if they have it. I told him just try to stay in his cell as much as he can and try to just quarantine away from others."

She's not sure if her loved ones have gotten vaccinated yet. She worries about more outbreaks. Anything to reduce their chances of contracting the virus would make her feel better, she said.

"I'm always worried about their safety and their health," she said. "I miss them, and I want them home."

The Colorado Department of Corrections offered $500 bonus payments to prison workers who were fully vaccinated by May 15, station KUSA-TV reported. Massachusetts prison employees have declined shots in large numbers, The Associated Press and the Marshall Project reported.

To her knowledge, financial incentives haven't been considered in Arkansas, the Department of Corrections' spokeswoman said.

Another tactic is enlisting people whom vaccination-shy correctional workers can relate to: co-workers, community elders, or people with the same racial background, said Hart, the New York-based expert. Those are "better messengers" to talk through workers' concerns about vaccination.

Hart said he thinks prison staff members' worries about vaccinations are the same as for others. A climate of "misinformation" and "conspiracy theories," paired with the fact that some prison staff members are members of minority groups who have experienced medical racism, likely contribute.

"It's important that we start to kind of nibble at the fear," he said.

Covid-19 shots for people in prison were a high priority for health experts, in part because those jailed often have health problems that put them at high risk of serious outcomes. Overcrowding and lack of access to protective tools -- soap, hand sanitizer -- also fuels the spread of any infectious disease among incarcerated people, UAMS' Zaller said.

One of the best ways to protect inmates is to shut down exposure to people who might have been infected in the community, he said, especially while the U.S. continues to record tens of thousands of new virus cases each day.

"We know what's going to happen" in prisons, Zaller said. "The question is, are we going to act to do anything about it?"