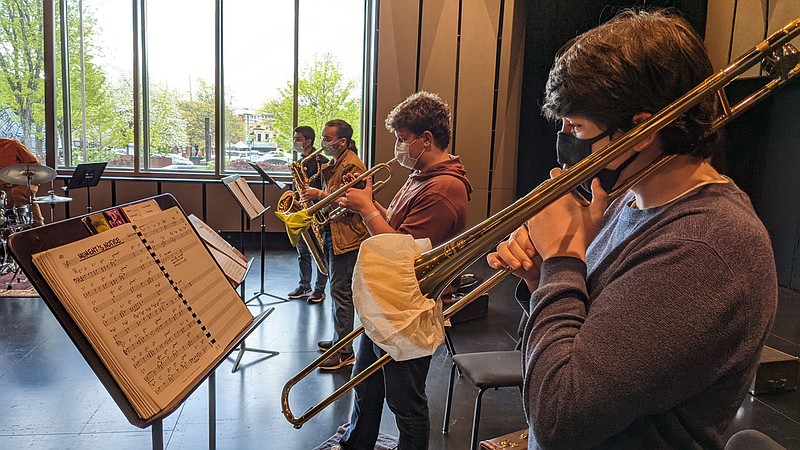 The NWA Jazz All-Stars Youth Ensemble have had to make adjustments due to the covid-19 pandemic — this year’s group was divided in two to increase social distancing, and masks were required — but still managed to safely perform with jazz great Bobby Watson at the Walton Arts Center last weekend. Interested high schoolers should check the website at digjazz.com/youthjazz/ to watch for information about next year’s program, which usually launches at the beginning of February. (Courtesy Photo)

Students from grades nine to 12 may audition for the group, which usually rehearses from the end of February until its final performance at the end of April. Of course, starting last year, covid-19 has thrown a wrench into the works -- but Ginsburg says the program has persevered.

"We had to develop a whole different model," he says. "Last year, we were about five rehearsals in with an 18-piece big band. And, of course, you can't have 18 kids in a room blowing horns together during the pandemic. So we brought in very small groups of the kids -- like the piano, bass and drums -- and we recorded them. And then we brought in the trumpets, and they listened to what the other kids played and played along with it. And we made these incredible videos. So that year, that was the project -- no live performance."

This year, says Ginsburg, 14 students were chosen from 11 area high schools to participate and, by breaking them up into two smaller groups, they were able to have both the studio and live experience while staying safely distanced. Last weekend, they performed on the Walton Arts Center's Baum Walker Hall stage with jazz great Bobby Watson.

"This tradition is really not unlike folk music and other kind of word-of-mouth traditions," Ginsburg says of jazz instruction. "The elders pass it on. You can study it, but the real knowledge of it is passed on by the elders. That's what our local instructors do, and when you bring in somebody like Bobby Watson -- he's toured with the greats of the world, and he's absorbed from his elders. Bobby calls them 'time bombs' -- he said that when he was touring with some of the greats, they would say something to him and while he felt that it was profound, he didn't quite get it. It might be eight years later when something occurs in his life that referred back exactly to what wisdom this person said to him, and, boom, it goes off -- a time bomb. He's going to be dropping time bombs off for these kids, I guarantee it."

In addition to sharpening their jazz skills, Ginsburg says practicing the improvisational nature of jazz music will also improve their musicianship in other genres, as well.

"[NWA Jazz All-Stars Youth Ensemble includes] a lot of emphasis on improvising and virtuosity, and a huge emphasis also on the real art of jazz, which is listening and being a team player," he explains. "You always hear about jazz as a truly American art form, like baseball. And in many ways, it is like baseball -- there are these superstars that stand out, but they are nothing without their teammates. The great jazz players always have great bandmates, and it's all about being part of the band.

"Once you develop the skills it takes to be proficient in jazz, you can apply those to any other music, and it's going to up your game in terms of what you can do."

Auditions for the NWA Jazz All-Stars Youth Ensemble are usually held after the beginning of the new year. Check digjazz.com/youthjazz/ for audition information.

Other opportunities for students participating in the NWA Jazz All-Stars Youth Ensemble include the potential to win a scholarship to the Jamie Aebersold Summer Jazz Workshops, held for over 50 years at the University of Louisville. Founded by the famed jazz saxophonist Aebersold, the workshop is another opportunity for young jazz aficionados to gain valuable musical instruction.

“It’s kind of what I modeled our program after,” says Robert Ginsburg. The funding for the scholarships comes from the NWA Jazz Society. “Over the years, we’ve awarded 90 of these scholarships to local students. I saw what it did for them — they come back and their musical lives are changed. This program puts them in groups of their peers and matches talent. Every night, there’s faculty concerts with all of these jazz elders that work at this camp. It’s a really intensive experience for the kids.”