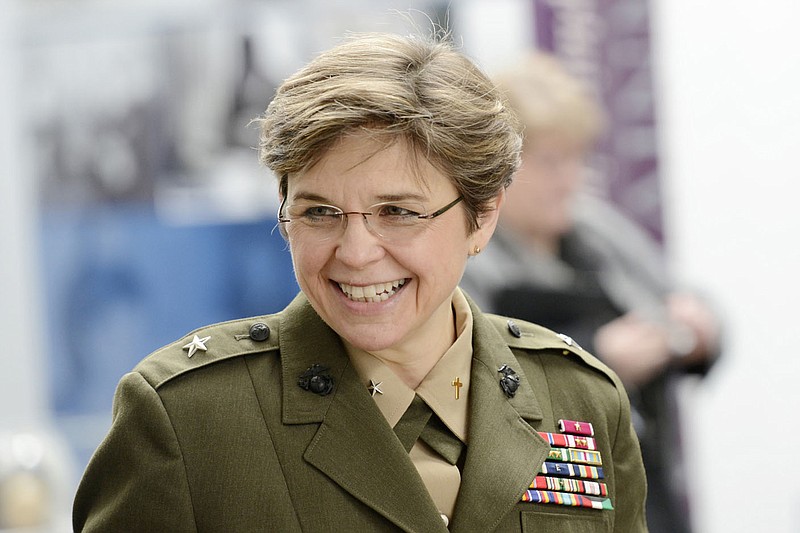 The 18th chaplain of the U.S. Marine Corps and Deputy Chief of Navy Chaplains, Rear Adm. Margaret G. Kibben, visits an exhibit featuring female chaplains at the Women in Military Service for America Memorial at Arlington, Va. in 2013. Kibben, the first women to become a chaplain for the Marine Corps, serves as the House chaplain. (U.S. Department of Defense/EJ Hersom)

WASHINGTON -- House Chaplain Margaret G. Kibben begins many of her prayers in a familiar place -- "Would you pray with me?"

The new chaplain has invited people to pray with her often, on some of the most difficult days Congress has seen in many years. Since being sworn in on Jan. 3, Kibben has prayed after the death of a Capitol Police officer, during a bitter partisan debate on pandemic aid and as she stood in the chamber on Jan. 6 while a pro-Trump mob beat on the barricaded doors.

That day started off with an electric charge, and by about 2:30 p.m. the fuse had been sparked.

Her prayer on the morning of Jan. 6 asked God to "defend us from those adversaries both foreign and domestic. Outside these walls and perhaps within these chambers, who sow seeds of acrimony to divide colleagues and conspire to undermine trust in your divine authority over all things."

As she sat watching the action of certifying ballots, she began to notice members of House leadership had slowly been pulled from the chamber one by one. Then, chaos. As rioters banged on the doors, she could see a clerk clap their hands in a prayer motion, summoning her to a sacred moment as people donned gas masks.

"I left my seat and went up to the podium and offered a prayer," she said in an April interview. It reminded her of combat, but it felt like she was exactly where she needed to be.

"I felt God's covering and God's calling as to my role in that moment to be a spiritual leader," she said.

Kibben, as she stood at the podium to lead the chamber in prayer, was continuing a duty that dates back to the earliest days of the union when the first chaplain, Rev. William Linn, was elected in 1789.

The mission remains pretty much the same: Provide pastoral counseling to the House community, schedule guest chaplains and arrange memorial services for members of the House and its staff. (The Senate has its own chaplain.)

POLITICAL BUT NOT PARTISAN

Most people know the chaplains for their most prominent role, delivering the short prayer that kicks off floor proceedings for the day.

The challenge is to offer words somehow relevant to the task of lawmaking and the current mood without appearing partisan. That's no easy task, as Kibben discovered on March 10 when she asked God to forgive House members for "failing to address the acrimony and divisions which have prevailed in this room" and unite around a response to the pandemic. A Washington Post reporter described it as "a blistering critique of lawmakers."

Some members thought she was telling them how to vote, but that wasn't her intent, she said.

The experience has made her "more reflective on that audience," said Kibben, who looks for chances to build trust and talk informally with lawmakers. She keeps an eye on C-SPAN to see when they're gathering in the chamber, and then heads over to mingle.

Kibben grew up in Warrington, Pa., outside of Philadelphia, with a family active in the Presbyterian ministry. She was a child who by her own account wasn't particularly popular but was a good listener. Friends brought her their problems.

She felt a call to ministry relatively young, at age 14. By that point, Presbyterians had been ordaining women for only a couple of decades.

"I looked over at my youth pastor one time at a youth retreat and said, 'I want to do what he's doing,'" she said.

Kibben, now 60, earned her undergraduate degree from Goucher College in Maryland before attending Princeton Theological Seminary. She entered active duty in 1986 through the Navy's Theological Student Program and also has a master's degree in national security and strategic studies from the Naval War College.

She is married to retired Marine Lt. Col. Timothy J. Kibben. They have a daughter, Lindsay Elizabeth.

She left the Navy in 2018, retiring as the 26th chief of chaplains, after a nearly three-decade career spent roughly half in the Navy and half in the Marines. She served aboard ships, was deployed to Afghanistan for about a year and reached the rank of rear admiral.

While the crisis of Jan. 6 brought memories of combat zones flooding back, most days aren't like that. In her new job she acts mainly as a facilitator, she said at a recent event at the National Cathedral.

Unlike in the military, where service members may spend months away from home or deal with life-and-death matters on the battlefield for the first time, members of Congress are in Washington for short bursts and often return to faith groups back in their districts.

Being the 61st person to serve as House chaplain is an awesome job and responsibility, Kibben said, but she doesn't like being called out as the first woman to hold the office.

"It's important. But that is not anything I've ever hung my hat on," she said. "I've been the first in a number of different areas, but for me what it signifies is, it doesn't matter anymore. That's how I look at it -- it means that the door is open, and gender is not a barrier."

Kibben shares something in common with Senate counterpart Barry Black, who joined her at the National Cathedral event. Both are former Navy chaplains.

When Black became Senate chaplain in 2003, he was the first Black person and first Seventh-day Adventist named to the post. All the House and Senate chaplains so far have come from Christian traditions.

Kibben's theology of ministry is to "love people where they are, as they are," and that philosophy hasn't changed throughout her career, she said. "Just the environments."

Her weekly routine includes listening in on some of Congress' virtual prayer groups -- "I like to know what people are praying for," she said -- and leading a "chaplain chat" session open to anyone in the House community Wednesdays at lunchtime, which has attracted anywhere from 30 to 90 people.

There are lots of prayers to write now, even more than the daily prayer she used to give at sea. She has started to carry a daily agenda around, jotting down notes and stashing away quotes for future use.

When the delivery nears, she takes the handwritten prayer and moves it to the computer to iron out final details before printing out a copy to read on the floor.

Kibben says she begins her writing process where it ends, starting prayer with prayer and thinking of her audience.

"It has to affect them and bring them closer to God," she said. "And if it doesn't, then I have failed."