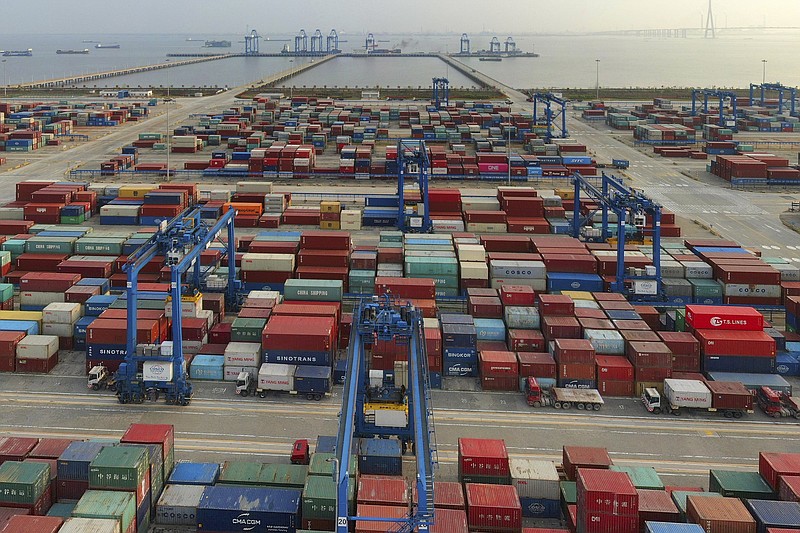 This container port sits on the Yangtze River in eastern China’s Jiangsu province. China reported that its April imports and exports soared over the same month in 2020. (AP/Chinatopix)

BEIJING -- China's trade with the United States and the rest of the world surged by double digits in April as consumer demand recovered, but growth appeared to be slowing.

China's trade gains look especially dramatic in comparison with a year ago, when global economies shut down to fight the coronavirus. Forecasters say growth flattens out once that distortion and seasonal fluctuations are taken into account.

Despite the jump in April's headline figures, exports are leveling off "and the rebound in imports stalled," Julian Evans-Pritchard of Capital Economics said in a report. "Demand is probably close to a cyclical peak."

The trade outlook is overshadowed by a tariff war with Washington and surveys that show April growth in export orders weakened. President Joe Biden has yet to say what he might do about reviving talks aimed at ending the trade war.

On the domestic front, economic output in the three months ending in March grew 0.6% from the previous quarter, showing China's explosive rebound was abruptly slowing. That suggests growth in Chinese demand for iron ore, consumer goods and other imports will cool.

Chinese manufacturers of smartphones, cars, consumer electronics and other goods also are hampered by global shortages of processor chips as industries revive following the pandemic.

April exports to the United States rose 30.8% over a year ago to $42 billion despite U.S. tariff increases that stayed in place after Beijing and Washington agreed to a truce in their trade war last year. Imports of American goods rose 23.5% to $13.9 billion despite Chinese tariff hikes.

China's global trade surplus narrowed by 5% to $42.8 billion, a sign Chinese demand is recovering faster than in the rest of the world. Its politically volatile surplus with the United States widened by 33.4% to $28.1 billion.

Exporters benefited from the early reopening of China's economy and demand for Chinese-made masks and other medical supplies while some governments are reimposing anti-virus curbs that limit business and trade.

The latest Chinese import figures also are inflated by the rise in global prices for iron ore and other commodities. That can make imports look bigger while the amount of goods holds steady or declines.

Liu Peiqian, an economist at Natwest Group, cited increased global demand for microchips, where Chinese companies are a key part of the supply chain, as another reason why "exports outperformance will likely remain a key theme" in China's recovery. In volume terms, imports of industrial metals and energy products softened slightly in April, she added, suggesting that the domestic demand recovery could still be relatively weak.

At the Communist Party's Politburo meeting last week, China's top leaders pledged to accelerate the recovery in domestic demand and reiterated there would be "no sharp turn" on economic policy. But the government is focused on raising consumer spending on goods and services, while taking a cautious stance on property and infrastructure investment, which tends to be more import-intensive.

A strengthening recovery in Chinese consumer spending was indicated by the April services purchasing managers' index compiled by Caixin Media and IHS Markit, which rose to 56.3 from 54.3 the previous month, well above the 50 reading that marks an expansion from the previous month. However, data from a recent five-day public holiday in China showed spending below pre-pandemic levels, suggesting China will remain dependent on overseas demand for much of its growth this year.

Information for this article was contributed by Joe McDonald of The Associated Press and by staff members of Bloomberg News.