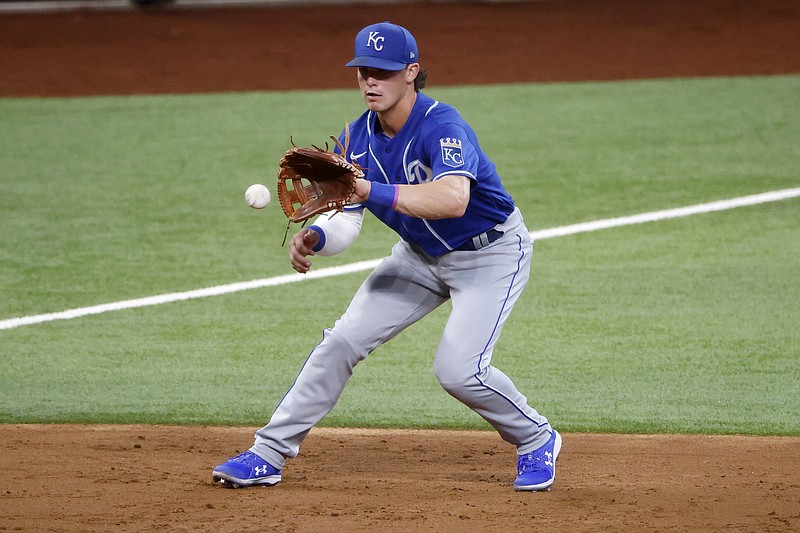 SPRINGDALE -- The "kid" on the Northwest Arkansas Naturals' roster admits he can't wait to get the season started, especially since there was no season last year.

Bobby Witt Jr., who will turn 21 in June, was bubbling with enthusiasm when asked about his Class AA debut when the Naturals take on the Arkansas Travelers in tonight's season opener at Dickey-Stephens Park in North Little Rock.

"I'm pumped," Witt said Monday. "I've got a smile on my face just thinking about it. I'm ready.

"It's fun to meet all the guys and being around the team the past few days and get a feel for them and getting that camaraderie together. It's been exciting and I'm ready to get things going."

Expectations are high for the Kansas City Royals' first-round draft pick and the second overall pick in the 2019 Major League Baseball Draft. Witt, the son of former big-league pitcher Bobby Witt, spent time in the Royals' training camp this spring, as well as time at the Royals' alternate camp site.

The Naturals play Tulsa on May 11 in the home opener at Arvest Ballpark in Springdale.

Naturals Manager Scott Thorman was impressed enough with what he saw for his rising star that he put it above what the younger Witt did in the Arizona Rookie League in 2019, when he hit .262 with 1 home run and 27 RBI in 164 at-bats.

"We're very excited to run him out there on a daily basis, let him play his game and let him enjoy his talent and let him see what he can do on the field."

Witt will primarily be used at shortstop, which is his natural position, but he will also see some time at third base. Thorman said he will have a number of players on this year's roster who will bring multiple gloves with them during games throughout the season, and the reason for Witt moving around is about development and making him a more well-rounded player.

The switch in positions won't bother Witt. He's more concerned about simply being himself.

"I'll make adjustments. This game is full of adjustments, and that's how we go. I'm just grateful I have the opportunity just to play this game at the level I'm playing right now."

While Witt might move around in the field, Thorman has already made it known that the youngster will be near the top of the Naturals' batting order until further notice.

"He'll be at the top at the order," Thorman said. "Not necessarily at No. 1, but he'll be in the top of the order for the simple fact that he's going to get a lot of ABs there, and pitchers aren't wanting to see him."

"He has extreme power," Thorman said. "He's a very advanced young hitter. And to be honest, nothing will surprise me. We can't wait to get our product on the field and let the players speak for themselves."