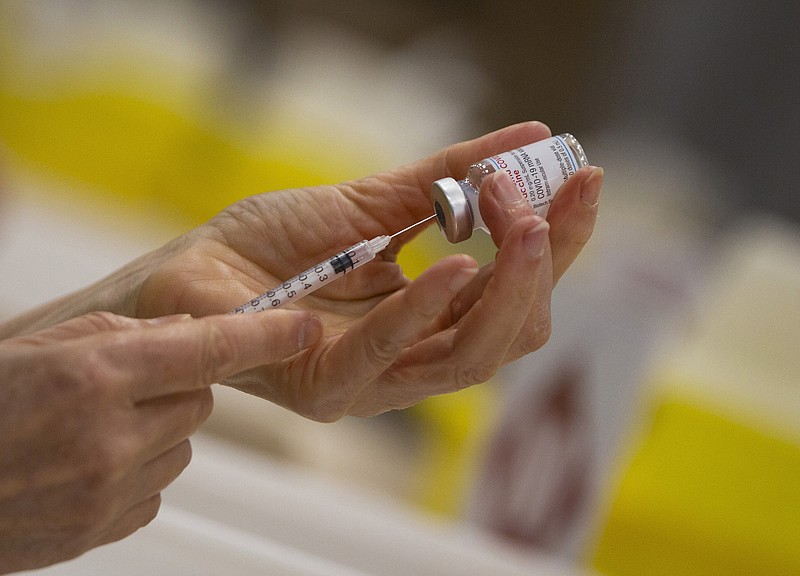 FILE - In this file photo dated Wednesday, April 14, 2021, a pharmacist fills a syringe from a vial of the Moderna COVID-19 vaccine in Antwerp, Belgium. Moderna and vaccine promoter Gavi have announced Monday May 3, 2021, the pharmaceutical company will provide up to 500 million coronavirus vaccine doses for the U.N.-backed program for needy people in low- and middle-income countries by the end of 2022. (AP Photo/Virginia Mayo, FILE)

GENEVA -- U.S. biotech company Moderna will provide up to 500 million doses for the U.N.-backed program to ship coronavirus vaccines to needy people in low- and middle-income countries, but shipments won't begin until the fourth quarter, the company and program leaders said Monday.

The advance purchase agreement from Gavi, the Vaccine Alliance, comes just days after the World Health Organization announced emergency approval of the Moderna vaccine that paves the way for its inclusion in the U.N.-backed COVAX program.

Gavi, a Geneva-based public-private partnership, has been scrambling to try to strike deals with vaccine makers at the same time as trying to persuade rich countries that have secured millions of doses -- some of which they aren't even using -- to donate them to poorer ones.

Moderna has already struck, and been delivering on, supply agreements with many rich countries, which have received millions of doses of its vaccine. WHO has repeatedly decried a lack of equity in access to covid-19 vaccines.

The rollout of Moderna vaccines for COVAX isn't set to begin until the fourth quarter of this year, and the vast majority of the doses in the deal -- 466 million -- are planned for next year. The remaining 34 million are expected this year.

Stephane Bancel, the Moderna CEO, expressed support for the COVAX mission and called the deal "an important milestone" to ensure access to its vaccine worldwide.

"We recognize that many countries have limited resources to access covid-19 vaccines," Bancel said in a statement. "We remain committed to doing everything that we can to ending this ongoing pandemic with our mRNA covid-19 vaccine."

The company said the doses were offered "at Moderna's lowest tiered price, in line with the company's global access commitments," without specifying. Gavi didn't provide financial terms, but has said the per-dose prices of vaccines for COVAX will eventually be made public.

Many experts say the covid-19 crisis is acute now, with India in particular facing an unprecedented surge in cases. The Moderna vaccine has generally been considered among the most effective so far in combating new variants like the one that is spreading in India.

Seth Berkley, CEO of Gavi, hailed the access to "yet another efficacious vaccine."

"Expanding and having a diverse portfolio has always been a core goal for COVAX, and to remain adaptable in the face of this continually evolving pandemic -- including the rising threat posed by new variants," he said. "This agreement is a further step in that direction."

The arrangement means Cambridge, Mass.-based Moderna can join the COVAX rollout that already includes vaccines from Oxford-AstraZeneca, which has the biggest role so far in the program, and Pfizer-BioNTech, which has committed far fewer doses to it.

Supplies of the AstraZeneca vaccine for COVAX that are being produced in India have been limited in recent months as the New Delhi government and a key Indian subcontractor -- the Serum Institute of India -- divert much of its production to combating nation's outbreak.

The Coalition for Epidemic Preparedness and Innovation, a public-private partnership that co-manages COVAX with Gavi and WHO, made an early investment into the Moderna vaccine as the pandemic arose. The first official link-up between the company and the program has come nearly 18 months into the pandemic.

The WHO go-ahead for an emergency-use listing for Moderna's vaccine, announced late Friday, took many months because of delays that WHO faced in getting data from the manufacturer.

Many countries without their own advanced medical regulatory and assessment offices rely on the WHO listing to decide whether to use vaccines. U.N. children's agency UNICEF also uses the listing to deploy vaccines in an emergency like the pandemic.

Gavi's rush to get vaccines to poorer countries -- particularly in light of the delays in supply from India -- got a boost when Sweden's government announced plans to donate 1 million doses of AstraZeneca vaccines to India through COVAX.

"We need to do everything we can to face this pandemic and fight it across the world," Per Olsson Fridh, the Scandinavian country's international development cooperation minister, told Swedish broadcaster SVT.

COVAX has shipped tens of million of doses to dozens of low- and middle-income countries since February, and has plans to deploy 2 billion by the end of the year.

WHO Director-General Tedros Adhanom Ghebreyesus hailed Sweden's commitment as "a superb gesture that must be replicated urgently, and repeatedly, by governments around the world to accelerate the equitable rollout of vaccines globally."

Information for this article was contributed by Jan M. Olsen of The Associated Press.