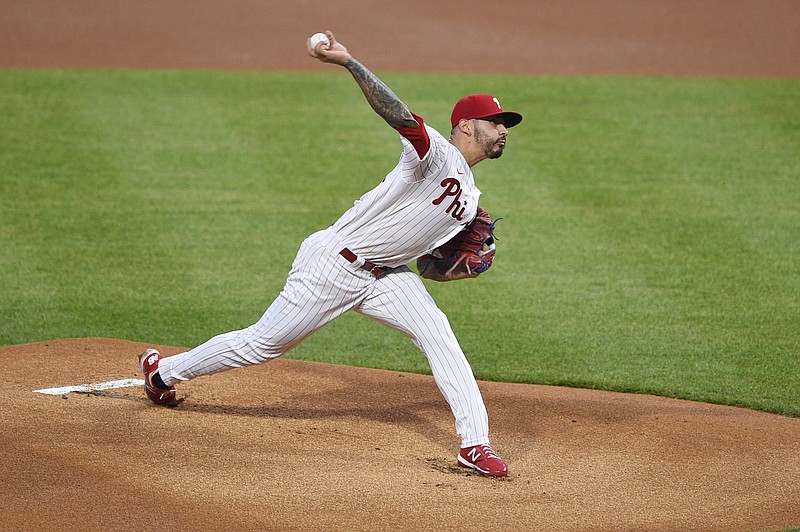 Philadelphia Phillies starting pitcher Vince Velasquez throws the ball during the first inning of a baseball game against the Milwaukee Brewers, Monday, May 3, 2021, in Philadelphia. (AP Photo/Derik Hamilton)

Velasquez (1-0) allowed 1 run and 4 hits, striking out 6 in his longest outing this season. Neris struck out Lorenzo Cain with the bases loaded in the ninth to preserve the win.

"It's a gutsy performance by Hector," Phillies Manager Joe Girardi said. "I mean, I don't ever like to let a pitcher go that many pitches. He looked over and said, 'I got this.' That was his last hitter no matter what. So, obviously he did a heck of a job."

Cain blasted a solo homer onto the concourse behind the left-center field stands to give the Brewers a 1-0 lead in the first in his first at-bat off the injury list. But National League Central-leading Milwaukee couldn't do anything else until Philadelphia went to the bullpen.

Sam Coonrod struck out the side in the seventh but the Brewers loaded the bases the next two innings. Connor Brogdon walked two and yielded an infield single to Christian Yelich in the eighth.

Neris then picked Garcia off first to end the inning and threw 36 pitches in the ninth to earn his sixth save in seven chances.

Daniel Vogelbach lined a double to start the ninth and Pablo Reyes ran for him. Neris struck out Luis Urias and Luke Maile swinging. Pinch-hitter Billy McKinney walked and Kolten Wong reached on an infield single to load the bases. Cain went down on a checked-swing to end the game.

"You have to win this game, especially when your closer does something like that," Girardi said.

Realmuto crushed his third homer into the second deck in left to give the Phillies a 2-1 lead in the first.

Roman Quinn drove an RBI triple the opposite way in the second and scored on Velasquez's infield grounder to make it 4-1. Both runs were unearned because of a throwing error on shortstop Luis Urias that allowed Odubel Herrera to reach second safely following his grounder.

Houser settled in nicely after the second and retired 13 in a row and 14 of his last 15 hitters.

"I didn't have my best stuff," Houser said. "I had two pitches going. I had to battle out there. My mechanics started to get going."

CARDINALS 6, METS 5 Nolan Arenado and Harrison Bader homered, Adam Wainwright hung tough and the St. Louis Cardinals beat the New York Mets for their fifth consecutive victory. Wainwright (1-3), activated from the covid-19 list to make the start, fell behind 5-2 in the third inning. But he didn't give up any more runs before leaving with two outs in the sixth, and the bullpen preserved his first win of the season. Genesis Cabrera and Giovanny Gallegos combined for 2 1/3 innings of scoreless relief. Alex Reyes worked around a pair of walks in the ninth to earn his eighth save -- he has not allowed an earned run in 14 1/3 innings this season. Joey Lucchesi (0-2) allowed six runs on seven hits in 2 2/3 innings after being recalled from the Mets' alternate training site to make the start. He has not pitched into the fourth inning in any of his three starts this season.

TWINS 6, RANGERS 5 Kenta Maeda steered himself back on track by keeping Texas scoreless into the sixth inning, and Minnesota won the opener of a four-game series. Maeda (2-2) had a season-high eight strikeouts in 5 1/3 innings, allowing two singles and two walks in what was by far the best of his six starts this season. Jorge Polanco had an RBI triple and an RBI double, and rookie Alex Kirilloff kept up his torrid start with two doubles for the Twins. One of them was a two-out, run-scoring line drive to left field in a three-run sixth that came against the left-handed reliever, Kolby Allard, brought in to face him. Adolis Garcia hit a two-run homer in the eighth inning for the Rangers. Joey Gallo hit a two-out, two-run homer in the ninth against Taylor Rogers, who got his second save by striking out Garcia. Dane Dunning (1-2) allowed two earned runs in 5 2/3 innings. Maybe the biggest mystery of Minnesota's rough first month was the struggle by Maeda, who finished second in AL Cy Young Award voting last year. The Twins weren't publicly worried, though, just hopeful he'd make some adjustments to his off-speed pitches. The right-hander obliged, lowering his ERA from 6.56 to 5.34 while leading the Twins to their fourth victory in five games.