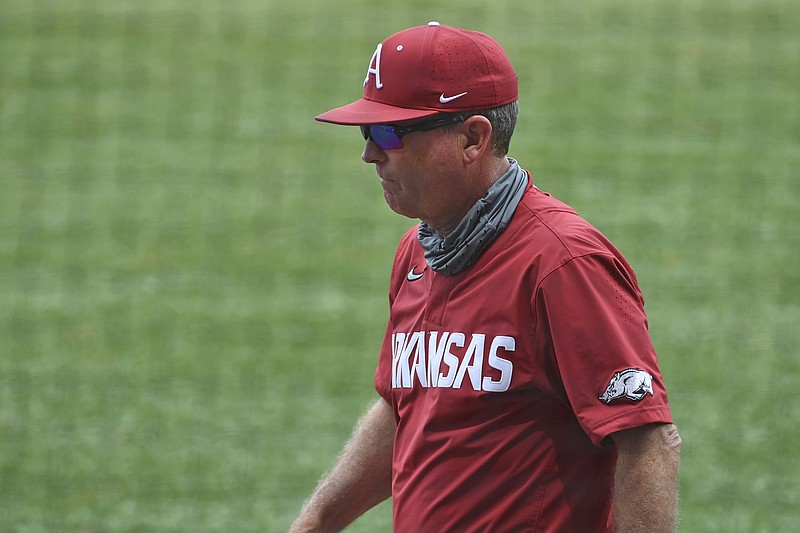 Dave Van Horn walks off the field during Arkansas' 17-10 win over LSU, Saturday, May 1, 2021, at Alex Box Stadium on the campus of LSU in Baton Rouge, La. (Photo by Hillary Scheinuk/The Advocate)

FAYETTEVILLE -- The 2021 Arkansas Razorbacks will ultimately be judged on their postseason success.

But the ride they're enjoying after the lost season of 2020 due to the coronavirus is spinning a fun narrative for a University of Arkansas program that has gone to back-to-back College World Series and is battling for its first SEC regular-season championship since 2004.

The Razorbacks (34-8, 15-6 SEC) retained their unanimous No. 1 ranking on Monday after winning their program-record seventh consecutive SEC series. The Hogs' series victory at LSU by a composite score of 28-15 was the program's 14th consecutive weekend series triumph and its 18th out of the last 19 dating back to April 14, 2019.

"It's been a really good season so far, obviously, and we're very fortunate that we've been for the most part injury free and we've played very consistent baseball," Coach Dave Van Horn said in his virtual Swatters Club appearance Monday.

With 10 games remaining on its regular season schedule, Arkansas is a game ahead of Mississippi State, Tennessee and Vanderbilt for the overall SEC lead.

The Razorbacks are No. 1 in the RPI ratings but slipped a little in strength of schedule. Playing LSU dropped Arkansas from first to second in RPI, while LSU bumped up to No. 1 after facing the Razorbacks.

"I think with the teams we have coming up, Tennessee on the road, Florida at home, those two teams are in the top 10," Van Horn said. "Georgia was in the top 25 in most of the polls. I think we could end the regular season with the No. 1 rated hardest schedule, so to speak, in the country.

The Razorbacks resume action Friday against Georgia (27-16, 10-11) looking to extend their string as the only SEC team to win every series this season.

"We're really excited about the next 10 games," Van Horn said. "We have Georgia coming in and ... they've been rolling pretty good. They did lose a series [to Auburn] this weekend.

"They've been a top 25 team really most of the year. And they have top 25 talent. They have big-time arms. They have a good bullpen. They hit home runs. They have a lot of talent. We know what we're in for."

Arkansas officials announced another increase in allowed capacity at Baum-Walker Stadium, bumping that number up to 7,645 for the remaining seven home games in May, including May 11 against Arkansas State.

Wiggins, who has four saves, has not pitched since April 18 and has not picked up a save since closing out a 6-4 win at Mississippi State on March 28 with a two-inning stint. His ERA was 1.17 at that point, but it ballooned over 6.00 after he allowed five earned runs while posting two outs in an 18-14 win at Ole Miss on April 11.

Van Horn said Wiggins is working on stretching out to be able to throw more pitches and perhaps have a shot at joining the rotation.

Meanwhile, senior Kevin Kopps had another big weekend with two outings in Baton Rouge to drop his NCAA-leading ERA to 0.85. Kopps struck out a school-record 11 consecutive batters between a stint at South Carolina and his seven-out save at LSU last Friday.

Arkansas continues to lead the country with 76 home runs, two more than Old Dominion. The Razorbacks are up to eighth nationally in both runs per game (8.3) and slugging percentage (.500) and their fielding percentage of .979 leads the SEC and ranks 16th in the country.

In SEC play, Arkansas' .984 fielding is tied with Alabama for tops in the league.

"Our team defense has been solid," Van Horn said. "When you pitch well and field well you're going to give yourself the ability to be in games.

"I'm just proud of the way our position players come out and they work hard in pre-game, work hard in practice and I think it carries over to the game. Plus they have a lot of talent. I'll stack up our infield, really the middle of the field with anybody in the country."

Van Horn said catcher Casey Opitz, shortstop Jalen Battles, second baseman Robert Moore and center fielder Christian Franklin are as good as any up the middle combination in the country.

Van Horn was asked by a Swatters Club member which player could be in line for a jump at the plate that could make him an "X-factor" going down the stretch.

"So really we're talking about if Zack Gregory can really become that pain, that guy who's taking a lot of pitches, fouling off pitches and can bunt, but also drive in a run here and there," Van Horn said. "And he's also got sneaky power. He could be a guy who if he could take off it would really help our offense.

"And then you go to one of those third baseman," he said, referencing Cullen Smith and Jacob Nesbit. "If one of those could really start swinging the bat -- they both play really good defense -- it could be really big for us."

NO. 1 ARKANSAS BASEBALL vs. GEORGIA