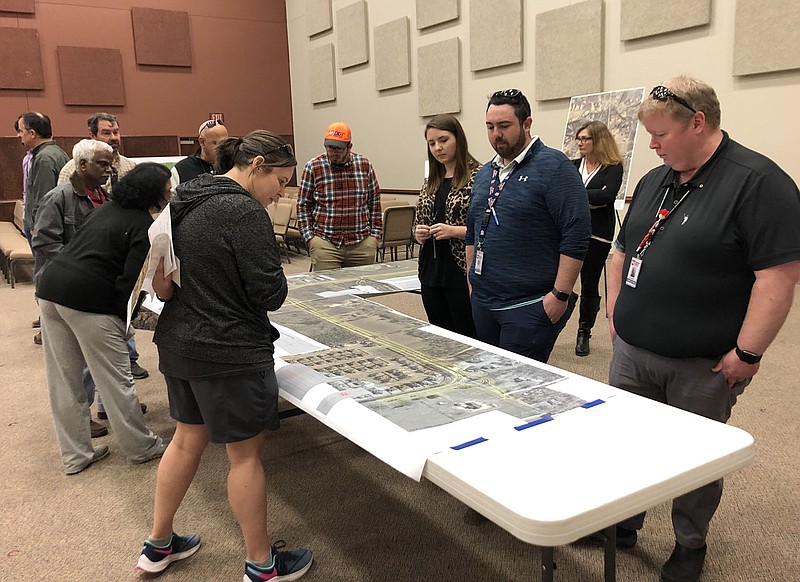 Residents go over conceptual plans to widen Arkansas 112 in western Fayetteville with staff from the Arkansas Department of Transportation on Thursday, March 5, 2020, at Church of Christ on West Mount Comfort Road. Construction on the project is expected to begin in 2022.

But right now plans are underway for a major state highway improvement that has Northwest Arkansas cyclists very excited.

Arkansas 112 is a traditional two-lane blacktop west of I-49 that connects Fayetteville to Bentonville and serves as the byway for communities such as Elm Springs and Cave Springs. It's a lovely 20-mile drive unless you're stuck in a line of traffic, quite possibly late for a flight at Northwest Arkansas National Airport.

What were once pastures along the road are now subdivisions with garages filled with cars -- and bicycles. So widening the road with more lanes makes sense. But in a major evolution from most Arkansas highway projects, this design includes a paved trail, parallel to the highway, built so walkers, runners and cyclists can stay active, safe and well away from cars.

More than just a glorified sidewalk, the trail will even have its own name: the Heritage Springs Trail.

Residents along the route who might normally be wringing their hands raising concerns about more traffic seem quite happy about the prospect of trail. The hope being that the trail will offer them the sort of economic and recreational benefits the Razorback Greenway now offers the larger cities to the east.

To understand why the Heritage Springs Trail is such a big deal, you have to understand something about transportation planning. Cycling advocates (the bike people) and state highway departments (the car people) rarely see eye-to-eye. In fact, they get along about as well as drivers and cyclists do at rush hour in Little Rock.

Highway officials operate at large scale. They want to optimize traffic flow, moving as many cars as possible down our roads swiftly and safely. They regard bike lanes, trails, sidewalks and crosswalks as impediments that slow traffic and add construction costs. That's why many state highways in Arkansas lack sidewalks and present a hostile space for pedestrians and people riding bikes.

Naturally, these traffic engineers wind up at odds with people who argue that we should include pedestrians and cyclists in our transportation plans. If you live in a residential or urban area, you know the value of having those choices.

But, as with just about any governmental process, there are rules about what must be included in a public project and luckily those rules have changed with the times. New standards for highway design now require sidewalks and, in many cases, separated facilities for bikes.

The Arkansas 112 project may be at least a decade from completion. So it's still early to celebrate.

But could the truce between bike people and car people mark the start of something new? I for one certainly hope so.

Our state perennially struggles with health challenges and ranks low economically. Trails and sidewalks can help on both counts, and a Transportation Department dedicated to that future could be a game-changer for all Arkansans.

Dale Eifling is mobility coordinator for the city of Fayetteville.