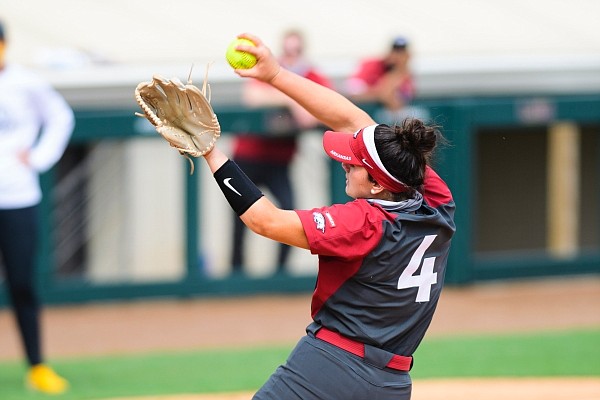 Arkansas pitcher Mary Haff delivers a pitch during a game against LSU on May 3, 2021, in Baton Rouge, La. (Photo by Rebecca Warren, LSU Athletics, via SEC pool)

The University of Arkansas softball team lost back-to-back games for the first time all season last weekend. The No. 7 Razorbacks made sure that didn't happen again and claimed a share of their first SEC regular-season title in the process Monday evening at Tiger Park in Baton Rouge.

Linnie Malkin and Kayla Green hit back-to-back home runs to give Arkansas some early momentum, and Mary Haff slammed the door on the 4-1 win over No. 14 LSU in the second game of a doubleheader.

Arkansas Coach Courtney Deifel was proud of how the Razorbacks bounced back after getting one hit in a 2-1 loss earlier in the day.

"I'm just ecstatic for them," said Deifel, who turned around a program that finished 1-23 in the SEC in 2016 to climbing to the top of the league standings in 2021 in arguably the toughest league in the country. "They have put together a really special season, and we'll make sure that we really enjoy this. ... They have worked their tails off to accomplish this.

"On a weekend like this when you're playing at LSU, it is an incredibly tough place to play. It's a tough place to win, so to control your emotions and stay the course and be that gutsy and pull it out is really incredible especially when you know what's on the line."

Arkansas took two of three against LSU and did it in a place that's been less than kind recently. The Razorbacks snapped a 17-game losing streak in Baton Rouge on Saturday that dated back to 2005. Arkansas won two of three in Fayetteville in 2018 but had won just two of the last 30 meetings before that.

The Razorbacks (40-8, 19-5 SEC) are now finished with the regular season, but second-place Florida can still tie them by sweeping Texas A&M this weekend. Arkansas will now prepare for the SEC Tournament which begins in Tuscaloosa, Ala., on May 12.

Deifel said her team did a good job of refocusing after the first game.

"We felt like we played well in game one," Deifel said. "We felt like in this thick air, wind blowing in, it's going to be hard to get a ball out. We were going to need to make an adjustment.

"We just kinda reset and said, 'Hey, we liked how we prepared, how we battled.' It didn't fall our way and now we need refocus and go after game two."

Arkansas jumped in front with a run in the top of the first as Hannah McEwen singled, went to second when Braxton Burnside was hit by a pitch, moved to third on Hannah Gammill's groundout and scored on a passed ball.

The Razorbacks, who rank second in the country in home runs, finally flashed their power as Malkin and Green hit back-to-back solo shots for a 3-0 lead in the top of the third. It was Malkin's 18th of the season and No. 14 for Green.

That would be enough as the tandem of Autumn Storms and Haff combined on the five-hitter. Storms has been limited lately because of undisclosed injury, started and gave Arkansas 3 2/3 innings, allowing a run on four hits. Haff allowed only two base runners over the final 3 1/3 innings to pick up the win (23-5).

The junior told Deifel she was ready to go again between games.

"I told her, 'I'd pitch a million innings if that means that we're gonna win,'" said Haff, who got all three decisions and pitched 16 1/3 innings in the series. "I was ready to go at any moment. We just controlled our emotions and just were ready for the next game and we came out on top. ... Yeah, this is a long time coming and we're not surprised that we're here."

"We've worked hard and we deserve it."

LSU (29-17, 11-10) scored its only run in the bottom of the fourth on Amanda Doyle's RBI single. Haff came on to get the final out and leave runners at first and second.

Arkansas got the run back though in the top of the fifth on a pair of two-out hits by Green and Aly Manzo. Manzo's double to the left-center field gap scored Green all the way from first, pushing Razorbacks' lead to 4-1.

The Tigers scored a run in each of the first two innings of the opener and Ali Kilponen (13-6) did the rest. The sophomore tossed a one-hitter and retired the final 16 Razorbacks in a row. She struck out three and walked three.

McEwen's infield single leading off the game was Arkansas' lone hit as the Razorbacks loaded the bases in the top of the first with nobody out against Kilponen.

Danielle Gibson's sacrifice fly put Arkansas on top 1-0, but that would be all it would get. Malkin followed with an inning-ending double-play groundout.

Shelbi Sunseri was hit by a pitch leading off the inning, moved to second when Taylor Tidwell drew a walk from Haff (22-5). Aliyah Andrews followed with a bunt single to load the bases with one out.

Ciara Briggs picked up the RBI with a groundout to shortstop to give LSU its 2-1 lead.