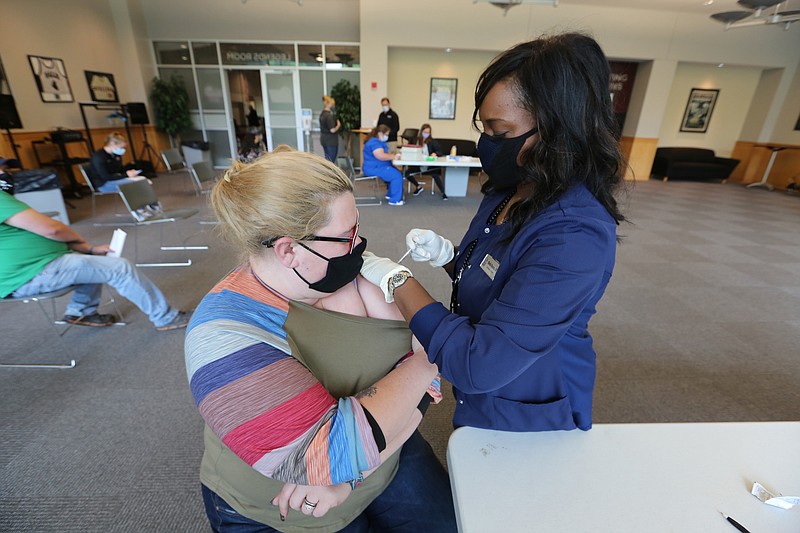 Bethany Alexander gets her first dose of the Pfizer vaccine from UALR nursing instructor Shelia Brooks during UALR's vaccine clinic put on by Don's Pharmacy on Wednesday, April 28, 2021, at the Jack Stephens Center in Little Rock. (Arkansas Democrat-Gazette/Thomas Metthe)

The number of severe covid-19 cases in Arkansas remained low and stable over the past week, but the rate of vaccinations continued falling, the state Department of Health reported Monday.

At this point, the state has more than enough shots to meet demand.

"It has slowed down this week, and for that reason we made the decision not to order additional doses for this next week," said state Epidemiologist Jennifer Dillaha. "We have a good supply already in this state that we could draw on for vaccinations."

This was the fourth-straight week that vaccination numbers declined after peaking at 155,467, or 22,210 per day.

"Because the number of cases are low, they [Arkansans] may not feel the urgency to get vaccinated," Dillaha said.

Statewide on Monday, 172 covid-19 patients were hospitalized, compared with 170 the previous Monday. Of those, 29 were on ventilators, up two from a week ago.

After peaking in January, the numbers of Arkansas covid infections, hospitalizations and deaths have plummeted. The fact that they remain low is encouraging, Dillaha said.

"Overall, it's a very hopeful picture," she said Monday. "I'm hoping we can keep our spread of covid-19 low in Arkansas, to allow people more time to get vaccinated before we have another rise in cases, potentially," she said.

Most of those are in the community. The Arkansas Department of Corrections has 29 active cases in its facilities, said spokeswoman Cindy Murphy.

The state's covid-19 death toll Monday stood at 5,747, up four from Sunday and an increase of 27 for the week.

The one-day jump in covid-19 cases Monday was 61. Of those, 11 were reported in Benton County, followed by Pulaski (9) and Faulkner (8) counties.

More than a tenth of the state's population has contracted the virus since March 2020.

Overall, 760,781 Arkansans 16 and older are completely immunized, according to state Health Department tabulations. Another 273,962 have been partially immunized.

That means roughly one-third -- 32.04% --of the eligible population is fully immunized and another 11.54% is partially immunized, Health Department officials say.

It's hard to know precise vaccination rates on a local level. County data is missing for 91,760 of the people who are completely vaccinated and for 70,177 of those who are partially immunized.

No demographic has proven immune to covid-19, but it has hit the elderly the hardest.

In Arkansas, 4.7% of all cases and 36% of all deaths were linked to nursing homes.

Hispanics accounted for 11% of all cases, but only 3.8% of the deaths.

At the University of Arkansas for Medical Sciences, the extra efforts appear to be paying dividends.

"Our numbers appear to be up just a little bit," UAMS spokeswoman Leslie Taylor said.

On Saturday, a vaccination clinic at Simmons Bank Arena in North Little Rock resulted in 585 immunizations, she said.

Across the river in Little Rock, 215 people showed up to be vaccinated at Saint Mark Baptist Church, she said.

Pop-up clinics Monday at Northwest Arkansas Community College and the Conway Human Development Center resulted in another 115 vaccinations, she said.

A drive-thru clinic at UAMS' Northwest Campus is vaccinating roughly 100 people a day, though it is capable of vaccinating twice that number, Taylor said.

At UAMS' 12th Street clinic in Little Rock, health care providers can vaccinate up to 600 people per day. Thus far, they've filled between 348 and 381 of those daily slots, she added.

"We are accepting walk-ins, so if someone comes, we won't turn them away," Taylor said.

Saint Mark isn't the only house of worship promoting vaccinations.

A clinic earlier this spring at Mosaic Church in Little Rock attracted more than 1,000 people. While the multiethnic congregation welcomed everyone, the participants were predominantly Hispanic.

The effort had been promoted on Univision and by other Spanish-language media. The Mexican consulate, the Health Department and others also assisted with the effort, Associate Pastor Alex Diaz said.

On Saturday, the congregation held a second clinic, enabling another 200 people to get shots, he said.

Some community members are hesitant to show up for a shot clinic, Diaz said. Spiritual leaders can help overcome the "obstacles and misinformation" that have hampered recent immunization efforts, he said.

The outreach has proved effective at Mosaic.

"[Of] the people I'm in touch with in our church, which is most of them, a great majority have already been vaccinated," Diaz said.