Arguments heard in suit over tactic for census privacy 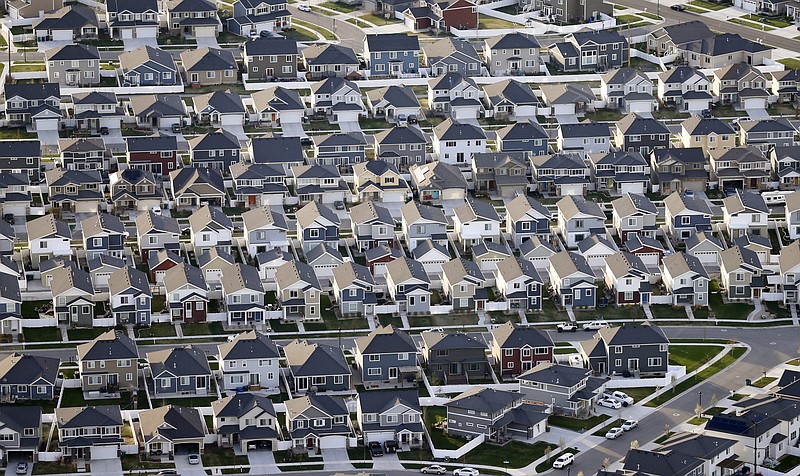 FILE - Rows of homes, are shown in suburban Salt Lake City, on April 13, 2019. Utah is one of two Western states known for rugged landscapes and wide-open spaces that are bucking the trend of sluggish U.S. population growth. The boom there and in Idaho are accompanied by healthy economic expansion, but also concern about strain on infrastructure and soaring housing prices. (AP Photo/Rick Bowmer, File)

MONTGOMERY, Ala. -- The fight over whether the U.S. Census Bureau can use a statistical technique to keep people's information private in the numbers used for drawing political districts went Monday before a judicial panel that must decide if the method provides enough data accuracy.

A panel of three federal judges heard arguments on whether the method known as "differential privacy" meets the federal legal requirement for keeping private the personal information of people who participated in the 2020 census while still allowing the numbers to be sufficiently accurate for the highly partisan process of redrawing congressional and legislative districts. Differential privacy adds mathematical "noise," or intentional errors, to the data to obscure any given individual's identity while still providing statistically valid information.

Any appeal could go straight to the Supreme Court.

The first major challenge to the Census Bureau's use of differential privacy comes in a lawsuit filed by the state of Alabama and three Alabama politicians over the statistical agency's decision to delay the release of data for drawing the political districts. Normally, the redistricting data is released at the end of March, but the Census Bureau pushed the deadline to sometime in August, at the earliest, because of delays caused by the coronavirus pandemic.

Alabama argues that the delay was caused by the bureau's attempt to implement differential privacy, which the state's attorneys say will result in inaccurate redistricting numbers. At least 16 other states back Alabama's challenge, which is asking the judges for a preliminary injunction to stop the Census Bureau from implementing the statistical technique. Alabama also wants the agency to release the redistricting data by July 31.

Alabama Solicitor General Edmund LaCour told the judges that the Census Bureau should return to a previous method for protecting privacy in which easily identifiable characteristics in a household are swapped with data from another household.

"Small changes matter when you are dividing up power," LaCour said.

Jason Torchinsky, a lawyer also representing Alabama, said the "little bit of noise" the bureau claims to insert could affect the accuracy of the data and, consequently, the number of the state's majority-minority districts, in which racial or ethnic groups make up a majority of a community.

Civil-rights advocates, state lawmakers and redistricting experts have raised concerns that differential privacy will produce inaccurate data that will skew the distribution of political power and federal funds.

But Department of Justice attorney Elliott Davis, representing the Census Bureau, told the judges that previous methods of privacy protection, such as swapping information, are not robust enough to guard against someone being able to "reverse engineer" the data to get people's information.

Davis said computer power has risen exponentially since the early methods were developed for protecting privacy. The new method used by the Census Bureau protects privacy while providing statistically accurate data, he said.

"The error evens out," Davis said.

Bureau officials say the change is needed to prevent data miners from matching individuals to confidential details that have been rendered anonymous in the data release.

In a test using 2010 census data, which was released without the obscuring technique, bureau statisticians said they were able to reidentify 17% of the U.S. population using information in commercial databases.

But University of Minnesota demographer Steven Ruggles said in a court filing that this would be impossible to do without access to internal, non-public Census Bureau data.

The delay in the release of the redistricting data has sent states scrambling for alternative plans such as using other data, utilizing previous maps, rewriting laws dealing with the deadlines or asking courts to extend deadlines. Ohio filed a similar lawsuit over the changed deadlines. A federal judge dismissed the case, but the state has appealed.

The three-judge panel did not indicate when it would rule in the Alabama case.