Intellectual-property law slows flow to India, others by Compiled Democrat-Gazette Staff From Wire Reports | May 3, 2021 at 7:13 a.m. 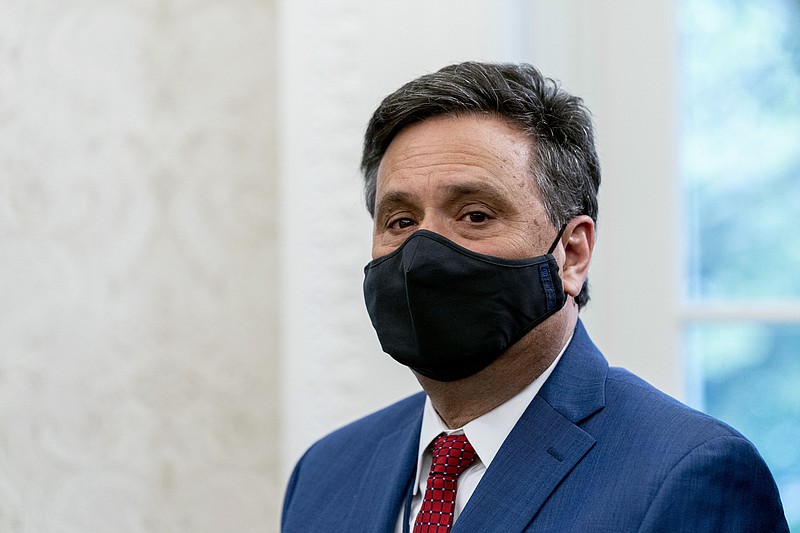 The White House has been under pressure from lawmakers at home and governments abroad to join an effort to waive patent rules for the vaccines so that poorer countries can begin to produce their own generic versions of the shots.

The U.S. has been criticized for focusing first on vaccinating Americans, particularly as its vaccine supply begins to outpace demand and doses approved for use elsewhere in the world but not in the U.S. sit idle.

Klain and national security adviser Jake Sullivan said the administration will have more to say on the matter in the coming days.

Sullivan said on ABC's "This Week" that the administration believes pharmaceutical companies "should be supplying at scale and at cost to the entire world so that there is no barrier to everyone getting vaccinated."

[Video not showing up above? Click here to watch » https://www.youtube.com/watch?v=Z3LUZT3IgF0]

Klain said the U.S. has sent India enough of the raw materials needed to make 20 million vaccine doses immediately. He added that despite the calls by Indian Prime Minister Narendra Modi and others, vaccine patents were only part of the problem, and that manufacturing limits would still hinder production.

India is battling a deadly surge in coronavirus infections and deaths. On Sunday, it recorded a slight drop in new infections with 392,488 from a high of 401,993 in the previous 24 hours. It also reported 3,689 additional deaths, bringing the total to 215,542. Experts believe the figures are undercounts.

"In a crisis of this speed and ferocity, we always wish we could move faster and do more. And we're proud of what we've done so far," Sullivan said. "We are continuing to work to source additional critical materials to move them as fast as we can, both directly from the United States and also galvanizing partners around the world."

Tai's office did not respond Sunday to a request for additional details after Klain's and Sullivan's comments.

Sen. Bernie Sanders, I-Vt., who is among a group of senators who are pressuring the White House on the issue, said on NBC's "Meet the Press" that the situation is "morally objectionable."

Sanders said that, when millions of lives are at stake, the drug companies must be told to "allow other countries to have these intellectual property rights so that they can produce the vaccines that are desperately needed in poor countries."

"There is something morally objectionable about rich countries being able to get that vaccine, and yet millions and billions of people in poor countries are unable to afford it," Sanders said.

Last week, President Joe Biden spoke with Modi and pledged to provide supplemental oxygen, personal protective equipment and other medical supplies, some of which have arrived.

Modi and other world officials have called on the United States to go a step further and waive vaccine patent protections, saying that would let other countries and companies speed up production of generics and expedite the vaccination effort worldwide.

"If a temporary waiver to patents cannot be issued now, during these unprecedented times, when will be the right time?" Tedros Adhanom Ghebreyesus, director general of the World Health Organization, tweeted in March. "Solidarity is the only way out."

The administration has also vowed to share up to 60 million doses of the AstraZeneca vaccine with other countries, prompted in large part by the crisis in India. Officials made that announcement several days ago, adding assurances that the United States does not need the AstraZeneca shots to continue inoculating the U.S. population.

Vaccines made by Pfizer-BioNTech, Moderna and Johnson & Johnson are being administered in the United States, and public health officials say that is more than enough for all Americans. Increasingly, the administration's biggest challenge is not obtaining vaccine doses but persuading Americans to take them.

Anita Dunn, a senior adviser to Biden, said the AstraZeneca doses the U.S. has promised to other countries have been ordered but that not all have been produced. The vaccine is undergoing a safety review by the Food and Drug Administration.

"To be clear, there isn't some huge warehouse filled with AstraZeneca vaccines that we can just release at a moment's notice," Dunn said on CNN's "State of the Union." "As soon as it is ready to be shared with the world, we plan to share it."

Meanwhile, a court in New Delhi said it would start punishing government officials for failing to deliver life-saving items as Indian hospitals struggle to secure a steady supply of oxygen and more covid-19 patients die amid the shortages.

Several hospital authorities sought a court intervention in New Delhi, where a lockdown has been extended by a week to contain the wave of infections.

"Water has gone above the head. Enough is Enough," said the New Delhi High Court, adding that it would start punishing government officials if supplies of oxygen allocated to hospitals were not delivered.

The court said it would start contempt proceedings.

The government has been using the railroad, the air force and the navy to rush oxygen tankers to the worst-hit areas, where overwhelmed hospitals are unable to cope with an unprecedented surge in patients gasping for air.

Twelve covid-19 patients, including a doctor, on high-flow oxygen, died Saturday at a hospital in New Delhi after its supply ran out for 80 minutes, said S.C.L. Gupta, director of Batra Hospital.

The Times of India newspaper reported another 16 deaths in two hospitals in southern Andhra Pradesh state, and six in a Gurgaon hospital on the outskirts of New Delhi because of the oxygen shortage.

The army opened its hospitals to civilians in a desperate bid to control the humanitarian crisis. Modi's government also gave emergency financial powers to the army set up new quarantine facilities and hospitals and buy equipment.

The military called up 600 doctors who had retired in the past few years. The navy deployed 200 nursing assistants in civilian hospitals, the government said.

On Saturday, India said all adults 18 and older could get shots. Since January, nearly 10% of Indians have received one dose, but only about 1.5% have received both, although the country is one of the world's biggest producers of vaccine.

India has so far given more than 156 million doses, but the population is more than 1.39 billion. Some states have already said they don't have enough for everyone, and even the ongoing effort to inoculate people older than 45 is sputtering.

Many nations are rushing therapeutics, rapid virus tests and oxygen to India to help it cope with the crisis.

The U.K. government said Sunday it will send an additional 1,000 ventilators to India, and England's National Health Service, which has battled one of the worst covid-19 outbreaks in Europe, is creating an advisory group to share its expertise with Indian authorities.

The new round of government aid comes in addition to the 200 ventilators, 495 oxygen concentrators and three oxygen generation units that the U.K. said it was sending to India last week.

Pfizer Inc. said it will ship 4.5 million doses of its covid-19 vaccine to South Africa by June to help that nation ramp up its inoculation drive.

The first 325,260 doses were to arrive Sunday night, Zweli Mkhize, South Africa's health minister, said in a statement. The government also expects Johnson & Johnson to release stock from the Aspen Pharmacare Holdings plant in the nation by the middle of May following a verification process with regulators, according to the statement. Aspen is making the Johnson & Johnson vaccine under license.

South Africa, which is the worst-affected country on the continent, lags behind emerging-market peers in vaccinations. It halted Johnson & Johnson vaccines after health agencies last month called for their suspension in the U.S. The Johnson & Johnson shot is a key element to the nation's vaccination plan and has already been used to inoculate health workers with no reported adverse effects.

The government last month contracted state-backed Biologicals Vaccines Institute of Southern Africa and Imperial Logistics to import an unspecified quantity of doses, the Department of Health said on its website. DSV Healthcare was contracted to store and distribute the doses countrywide.

The government ordered 30 million of the two-dose vaccine developed by Pfizer and BioNTech, which in addition to the Johnson & Johnson shots should be sufficient to inoculate more than two thirds of the nation's 60 million people to achieve herd immunity.

Information for this article was contributed by Darlene Superville, Ashok Sharma and Danica Kirka of The Associated Press; by Amy B Wang of The Washington Post; and by Antony Sguazzin of Bloomberg News (TNS). 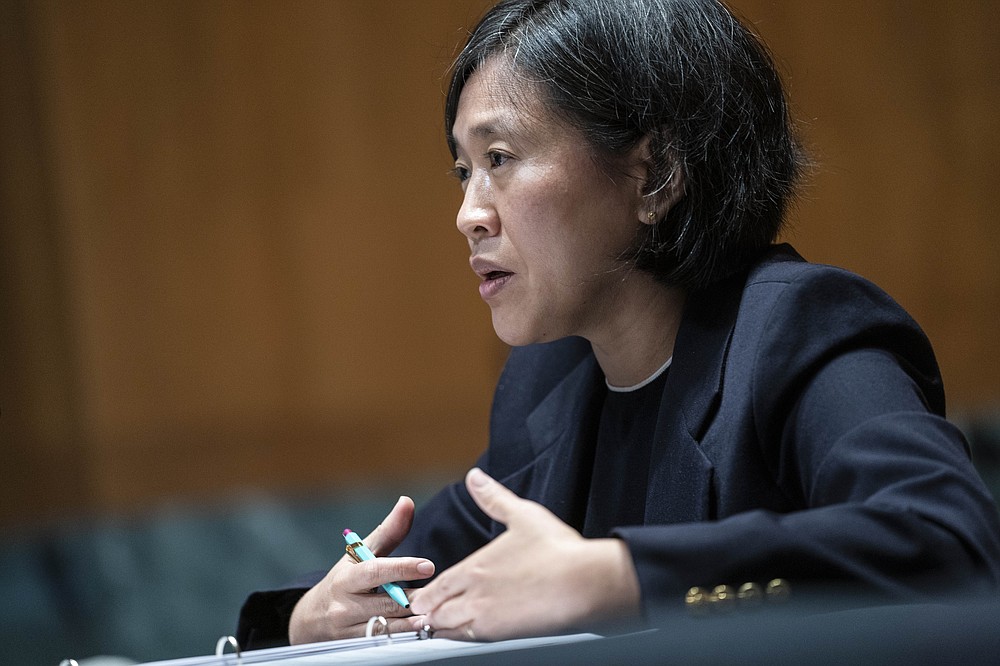 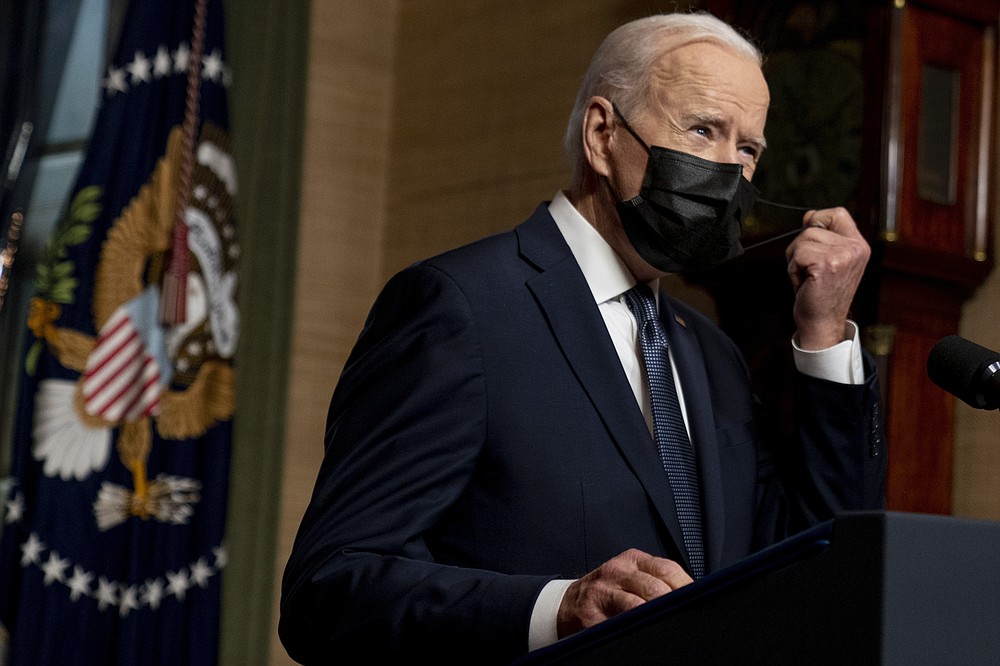 FILE - In this Wednesday, April 14, 2021, file photo, President Joe Biden removes his mask to speak at a news conference at the White House, in Washington. Ten liberal senators are urging Biden to back India and South Africa’s appeal to the World Trade Organization to temporarily relax intellectual property rules so coronavirus vaccines can be manufactured by nations that are struggling to inoculate their population. (AP Photo/Andrew Harnik, Pool, File)
ADVERTISEMENT