No agreements reached, officials say after report from Iranian news outlet by Compiled Democrat-Gazette Staff From Wire Reports | May 3, 2021 at 7:16 a.m. 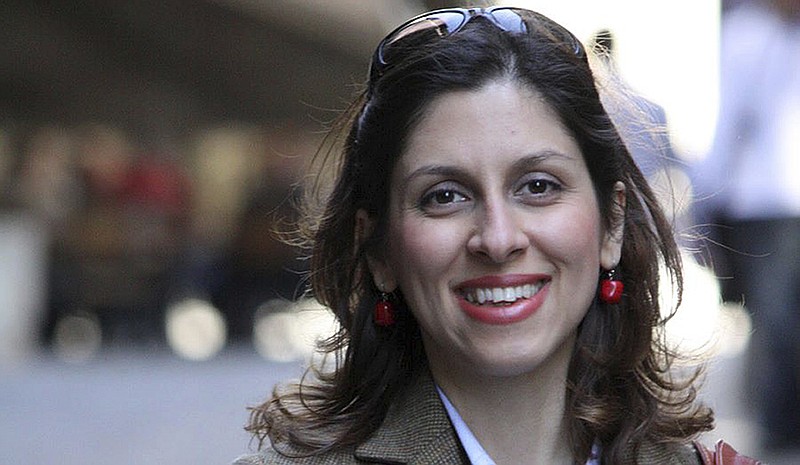 FILE - This undated file family photo, shows British-Iranian woman Nazanin Zaghari-Ratcliffe. On Sunday, May 2, 2021, Iranian state TV quoted an anonymous official that deals have been reached to release prisoners with Western ties held in Iran. The official said a deal made between the U.S. and Tehran will see a prisoner swap in exchange for the release of $7 billion in frozen Iranian funds. State TV also quoted the official saying a deal had been reached for the United Kingdom to pay 400 million pounds to see the release of Zaghari-Ratcliffe. (Nazanin Zaghari-Ratcliffe via AP, File)

DUBAI, United Arab Emirates -- The United States on Sunday immediately denied a report by Iranian state-run television that deals had been reached for the Islamic Republic to release U.S. and British prisoners in exchange for Tehran receiving billions of dollars.

"Reports that a prisoner swap deal has been reached are not true," State Department spokesman Ned Price said. "As we have said, we always raise the cases of Americans detained or missing in Iran. We will not stop until we are able to reunite them with their families."

This was echoed by President Joe Biden's chief of staff, Ron Klain, on CBS' "Face the Nation."

"We're working very hard to get them released," Klain said. "We raise this with Iran and our interlocutors all the time, but so far there's no agreement."

Even after an initial American denial, an anchorwoman on Iranian state TV still repeated the announcement.

"Some sources say four Iranian prisoners are to be released and $7 billion are to be received by Iran in exchange for releasing four American spies," the anchorwoman said. She described the claimed deal as imminent due to congressional pressure on Biden and "his urgent need to show progress made in the Iran case."

State TV did not identify the Iranians whom Tehran sought to be freed.

Iran's ambassador to the United Nations, Majid Takht-e Ravanchi, later denied the report of a prisoner swap, saying that it's "not confirmed," according to the Telegram channel of the state-run IRNA news agency.

"Iran has always emphasized the comprehensive exchange of prisoners between the two countries," he said, without elaborating.

It wasn't immediately clear whether the report represented a move by the hard-liners running the Iranian broadcaster to disrupt talks in Vienna on the tattered nuclear deal.

Prisoner swaps between the U.S. and Iran are not uncommon, and both countries in recent years have routinely sought the release of detainees. But any movement between the two countries is particularly sensitive as the Biden administration looks to restart nuclear talks. The 2015 nuclear accord involving the two nations included prisoner exchanges.

Iran holds four known Americans now in prison: Baquer and Siamak Namazi, environmentalist Morad Tahbaz and Iranian-American businessman Emad Shargi. Iran long has been accused of holding those with Western ties as prisoners to be used later as bargaining chips in negotiations.

Despite the American denials, there have been signs that a deal on prisoners may be in the works based on Iranian officials' remarks in recent weeks. A person with knowledge of the discussions who was not authorized to discuss them publicly said Sunday that talks are active, with messages passed between intermediaries.

Although no formal proposal for a swap has been presented to officials in Washington, let alone been approved by the White House, the specificity of the report from Iran suggested that working-level consideration of a deal is at least underway.

State TV also quoted sources as saying a deal had been reached for the United Kingdom to pay $552 million to see the release of British-Iranian woman Nazanin Zaghari-Ratcliffe, who has been detained since 2016.

British officials played down the report.

Last week, Zaghari-Ratcliffe was sentenced to an additional year in prison, her lawyer said, on charges of spreading "propaganda against the system" for participating in a protest in front of the Iranian Embassy in London in 2009. That came after she completed a five-year prison sentence in the Islamic Republic on a conviction of plotting the overthrow of Iran's government, a charge that she, her supporters and rights groups deny.

Aside from Zaghari-Ratcliffe's case, the U.K. and Iran also are negotiating a British debt to Tehran from before the 1979 Islamic Revolution.

Tehran is currently negotiating with world powers over a return for both Iran and the U.S. to the nuclear deal, which saw the Iranians limit uranium enrichment in exchange for the lifting of economic sanctions.

Talks on a U.S. return to deal have a "fair distance" to go, national security adviser Jake Sullivan said, after Iran said over the weekend that there's agreement on lifting some U.S. sanctions.

"The short answer is there is no deal now," Sullivan said Sunday on ABC's "This Week." U.S. diplomats "will keep working at that over the coming weeks to try to arrive at a mutual return" to the nuclear deal within guidance laid out by Biden, he said.

World powers, led by the European Union and including Russia and China, are trying to broker a U.S.-Iranian deal to revive the accord abandoned by former President Donald Trump in 2018. The U.S. isn't negotiating directly with Iran at the talks in Vienna, but it is participating in discussions led by the other parties to the treaty.

Iranian Deputy Foreign Minister Abbas Araghchi said Saturday that there was an "agreement in place" for lifting sanctions on "most individuals" and on Iran's energy, auto, financial, insurance and port industries. By contrast, a European official said much remains to be done to reach a deal.

"There is still fair distance to travel to close the remaining gaps, and those gaps are over what sanctions the United States and other countries will roll back," Sullivan said Sunday. "They are over what nuclear restrictions Iran will accept on its program to ensure that they can never get a nuclear weapon."

Iran has said that the U.S. must remove all sanctions that the Trump administration imposed on Iran, not just those that come under the terms of the nuclear accord.

Delegates are working on details of a document that would formalize the U.S. return to, and Iran's full compliance with, the original agreement.

Meanwhile, after coming under fire from Iran's supreme leader, the country's foreign minister offered him a direct and extensive apology Sunday for recorded comments leaked to the public last week.

The recordings that surfaced of Mohammad Javad Zarif, including a blunt appraisal of the country's internal power struggles and criticism of the late Iranian Gen. Qassem Soleimani, have sent shock waves through Iran less than two weeks before presidential elections. Officials in the Islamic Republic carefully mind their words amid a cutthroat political environment that involves the Revolutionary Guard, ultimately overseen by the country's supreme leader.

"I am so sorry," Zarif wrote in an Instagram post, "that part of my comments were stolen and published for misuse by enemies of the country and its people, and that it caused you, supreme leader, to feel regret."

The statement came after Supreme Leader Ayatollah Ali Khamenei appeared to lambaste Zarif in a televised speech on Sunday.

In his address, Khamenei refrained from calling out Zarif by name. But he described "a big mistake that must not be made by an official of the Islamic Republic," noting that the leaked comments "are a repetition of what Iran's enemies say."

Zarif's Instagram apology followed an earlier one to the family of Soleimani, who was killed by a U.S. drone strike in Iraq last year. In the post, Zarif repeated that the leaked seven-hour conversation was never meant for release. He expressed remorse for departing from Iran's official line, acknowledging that "following the supreme leader's suggestions and decisions is an undeniable necessity."

Zarif's criticism of the revered Soleimani, whose funeral processions in Iran drew millions of people to the streets, ignited instant controversy.

In the recordings, Zarif takes issue with Soleimani's relations with Russia, which Zarif accused of trying to sabotage the 2015 landmark nuclear deal. He also denounces Soleimani's refusal to stop using the U.S.-sanctioned national carrier, Iran Air, for operations in war-torn Syria despite Zarif's objections.

Speculation had mounted in recent weeks that Zarif, the Iranian official most closely associated with the nuclear agreement, would challenge hard-liners in the upcoming vote. But Khamenei's censure of the foreign minister is likely to dismiss any such ambitions, as the Guardian Council, a body of senior clerics and legal experts that serves under Khamenei, vets candidates for office.

Zarif has insisted he doesn't want to run.

Information for this article was contributed by Jon Gambrell, Isabel Debre, Matthew Lee, Amir Vahdat, Danica Kirka and Eric Tucker of The Associated Press; and by Tony Czuczka of Bloomberg News (TNS). 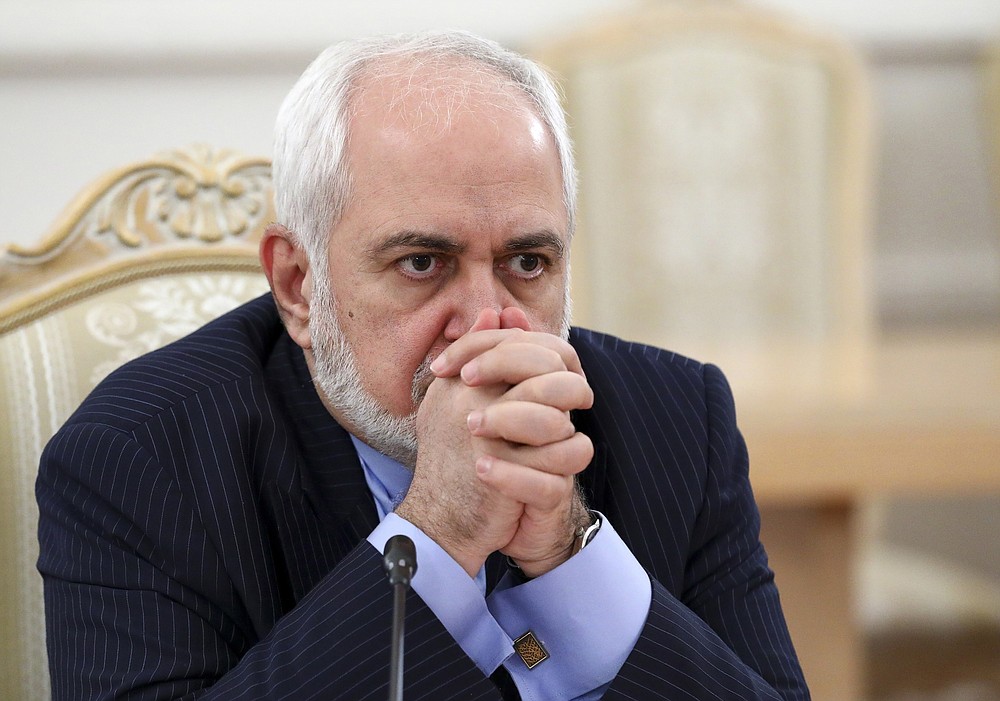