The MVP: Greenwood Bulldogs janitor wins the hearts of his teammates 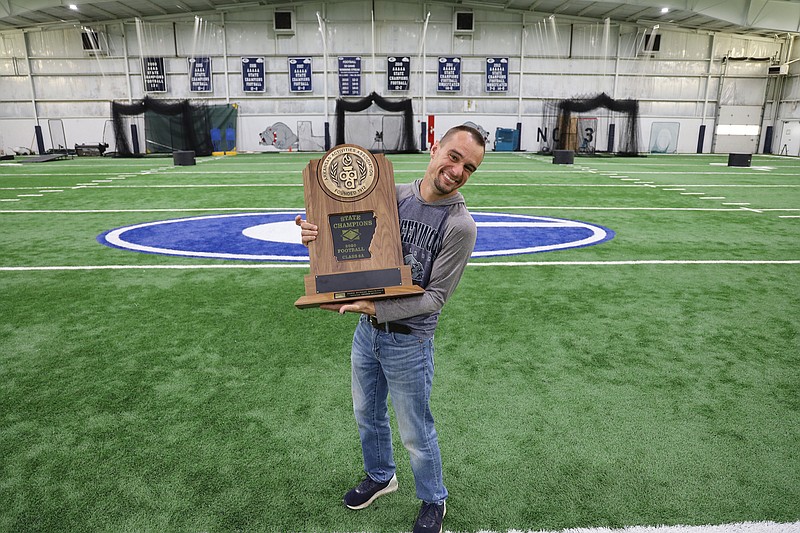 Jamie Freeman holds the Greenwood High School Bulldogs' 2020 Class 6A state champion trophy on the training field in the football complex he maintains as a school custodian. (Special to the Democrat-Gazette/Dwain Hebda)

Greenwood High School's football training complex hulks in the heart of the tidy, walkable campus. Down a central hallway lined with inspirational quotes and oversize posters of the team in action, the turfed indoor practice area and adjoining weight room unfold under multiple championship banners from the past 25 years, denoting one of Arkansas' most successful programs.

It's spring, and the defending Class 6A state champion Bulldogs are already preparing for another title drive, running off-season drills as coaches click stopwatches and hip-hop flows from unseen speakers. Nearby, a trim 30-something in a school-logo T-shirt takes in the action.

Some of the boys greet the man by name, at which he smiles brightly and nods back. He's slender enough to be mistaken for a wayward cross-country or swimming coach or one of the gaggle of football assistants putting players through their paces. But his role is more fundamental than that.

His name his Jamie Freeman, and this is his house, his building. He's the janitor here. And in ways that go beyond football, this is his team.

"We talk to our kids all the time about how they're part of a successful program but there's a lot more people that help us win, from our administration to our community to our maintenance staff to our teachers," said Head Coach Chris Young. "Jamie's another part of that. He truly helps us win. He takes care of our facilities and not only that, he provides an example for kids of how to live your life.

"He is directly tied to the football program in that he is in our facility all day long. He takes care of our grass outside the facility, takes care of cleaning everything inside our facility and just does an awesome job. It reminds us of how important it is to work hard."

"Jamie means a lot to this program," said junior cornerback and team captain Colin Daggett. "He's taught us to not give up on whatever we want to achieve. He's being a leader for our team, pretty much. I can see that, my teammates can see that, everyone can see that."

To Freeman, such words are proof that when others refer to him as family, they aren't simply spouting cliches. He has found acceptance beyond anything he expected when he took the job almost two years ago.

"One thing I like about the prospect of janitor work is that you really get to serve people," Freeman said. "When they put me with the football team, that's one thing that was really exciting, was building these relationships with these boys and being more than just the random guy that scrubs their toilets. Building those relationships and being a positive influence for them is a really special thing.

"We're not just a football team, we're a family. We're unique. To build those relationships and have that dynamic is one thing that makes Greenwood football what it is. There's an emphasis on being a team, being a community. To get to be a part of that, for me, is really special."

Much of Freeman's story is written in his telltale gait and narrated by his speech pattern. These are the badges of someone who has known exclusion at nearly every stage of life, since being diagnosed with cerebral palsy as a toddler. His exterior doesn't suggest what he holds in common with the rest of the world, from the relatively ordinary (a college degree, a wife and children, successful entrepreneurship) to the remarkable (public speaking and being the author of two books, with a third in the works).

"I went to college at Oklahoma Baptist and came back, got married," he said. "I get out of college and I'm looking for a job. This is 2009, so finding a job was really hard. This is when all the economic recession hit. Finding a job as a handicapped guy is even harder.

Freeman put his theology degree to use giving talks on faith and God's plan at some of the area's larger churches, at which free-will offerings were generally collected. He used that money to buy the three soda machines that became the cornerstone of his vending company.

After a decade, he said, regulations and red tape had eaten into his profits so badly that he decided to change careers to provide for his wife and five children.

"I went online one night to the Greenwood Schools website and I thought, what about maintenance? I can mop," he said with a heartfelt laugh. "There's a lot I can't do, but there's a lot I can do. I can be a janitor."

The site reported no positions available, but Freeman filled out an application anyway. After about a month, he was called in for an interview. He went in expecting an overnight job but was delighted to be hired to tend the football facilities. He has always enjoyed football although his condition never let him play. He likes sports in general.

As everyone soon found out, they'd unwittingly hired much more than just a capable custodian.

Athletic Director Dustin Smith said the joy Freeman brings to the work every day "is an encouragement to me."

"I'm huge on servant leadership and Jamie epitomizes that," Smith said. "He doesn't seek the spotlight. The incredible thing about Jamie is, a task that may take me five seconds may take him five minutes, but he doesn't ask for help. He's going to get the job done, and I think that's extremely noteworthy and something that everybody should look to and say, 'I want to be like that.'"

With the battle cry "We Over Me," the Bulldog football team steamrolled everything in its path last season. Despite the challenges of playing under the shadow of covid-19, the team posted a 14-0 record. They stumbled early in the state title contest only to right themselves and cruise to their 10th championship.

But no moment outshone the championship ring ceremony in February. In planning the event, team captains unanimously voted to present Jamie Freeman a ring with the rest of the squad.

"I think that demonstrated to the whole team, everybody's human. We've all just got to love each other and treat each other equally," said Parker Gill, junior linebacker and another team captain. "Jamie sets the example; he's always in here working, keeping the weight room clean for us. He never gives up on us."

They planned to surprise him. But as the day approached there was a problem: Freeman meant to skip the festivities to do his daily chores. So, the players, in cahoots with their coach, had to go covert.

"They told me they had a hat for me, so I went in order to get this ball cap. I thought. 'How cool is it? These are 16-, 17-, 18-year-old guys. How cool is it that they would think of the janitor and want to give him a hat?'" Freeman said, glowing over the memory.

"So, I go to the ring ceremony and at the end they call me up and there's a hat sitting on the table. I grabbed the hat, and there's a ring underneath.

"Just the look on his face; it was our way of being able to tell him thank you for everything he does for us," Young said. "It was a special moment for us to be able to share with him. I know it was special for him and very, very well deserved." 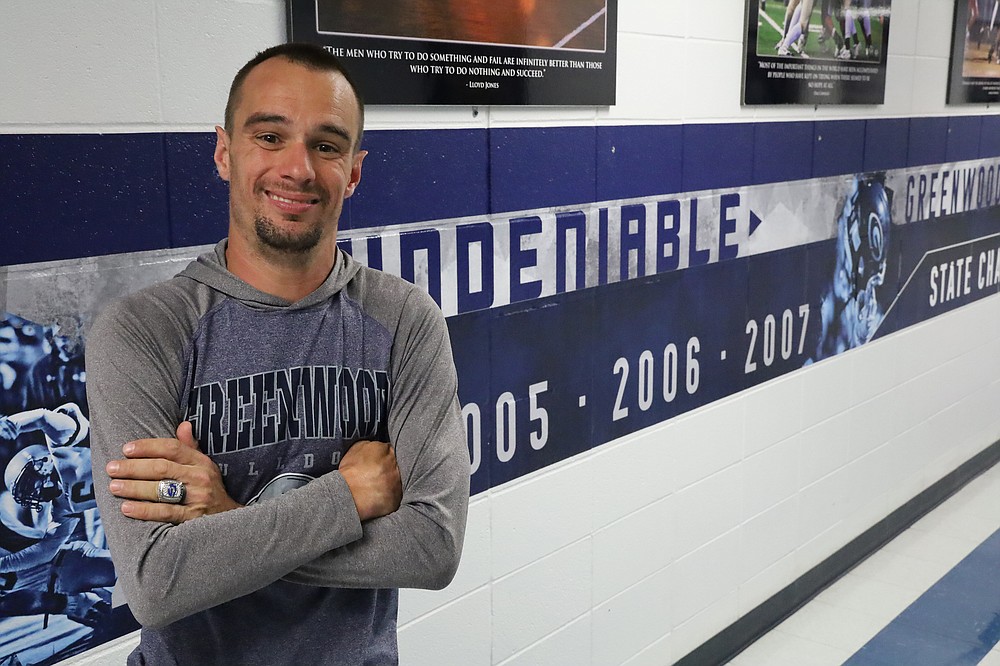 Coaches and captains of the Greenwood High School Bulldogs football team say their janitor Jamie Freeman’s attitude about his cerebral palsy and the joy he brings to his job inspire them. (Special to the Democrat-Gazette/Dwain Hebda)

Smith nicknames Freeman "Reverend" and it doesn't take much time to see why.

"When I was young, I fought severe depression. When God really got ahold of me, he just filled me with so much joy. People worried about me. But then Christ came and it just rocked my whole world and everything was different at that point."

In news reports after the ring ceremony, Freeman is quoted as calling cerebral palsy a "gift." Ask him about that, and he sits bolt upright in his chair, leaning into the topic with fervent intensity.

"I wasn't born handicapped because of the devil or because of a lack of faith. The devil is not in control, God is, and he meant this for my good. And he meant my son's disability for his good. Being able to embrace that has set my heart free in a thousand different directions."

At this, Freeman's eyes gently unlock yours, and he leans back in his chair.

What's next, you ask, what do you dream of for yourself now? Another gentle smile.

"I would be completely content to be the Greenwood team janitor for the next 30 years," he says softly. "The thing that drives me on a personal level is what can I do that glorifies God? If scrubbing commodes is it, that's what I want. I'm not looking for the next step up."

He knows some religious people who separate the church part of their life from the secular parts. "I don't think that way. I think all of it is very meaningful. My job as a janitor, to me, isn't a secular job. This is part of what I do every day because of my faith, because of what Christ did for me. I don't know how you compartmentalize things; I think it's all kind of grouped together, my life in His."

It has been three months since the ceremony, and Freeman still looks at the ring on his hand with something akin to disbelief.

"What does the future hold?" he asks. "I really don't know. I just want to get up every day and honor the Lord. If that's by scrubbing a floor or by writing a book or by playing with my kids, or whatever, to me, all of it has significant weight. None of it is mundane." 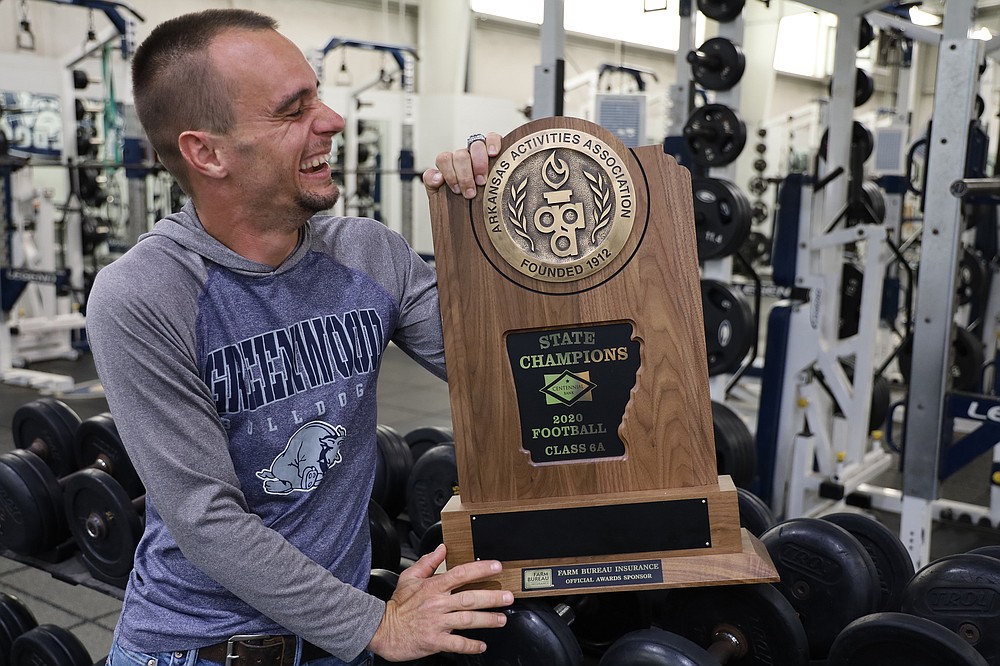 In the Bulldogs weight training room he keeps clean and orderly, Jamie Freeman is proud of the Greenwood High School state champion Class 6A football team, whose members honored him in February as a teammate. (Special to the Democrat-Gazette/Dwain Hebda)