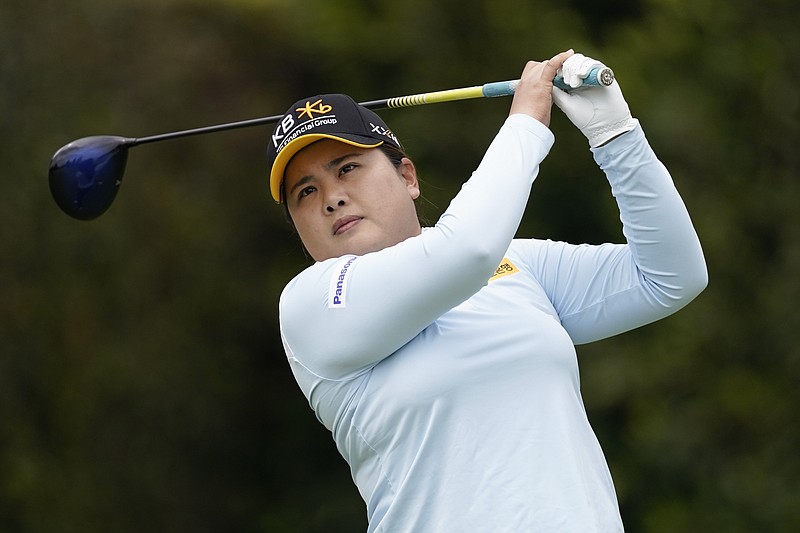 Inbee Park tees off at the second hole during the final round of the LPGA's Hugel-Air Premia LA Open golf tournament at Wilshire Country Club Saturday, April 24, 2021, in Los Angeles. (AP Photo/Ashley Landis)

Hyo Joo Kim shot a final-round 8-under 64 and then watched from the comfort of the clubhouse as Hannah Green bogeyed her final two holes to hand Kim a one-stroke victory Sunday in the LPGA's HSBC Women's World Championship in Singapore. Kim sat in the dining room at Sentosa Golf Club and munched on some late afternoon snacks while watching Green take a one-stroke lead to the 17th. But Green three-putted the par-3 hole to leave Kim tied for the lead. Then the Australian bogeyed the 18th after she missed the green and a comeback putt for par after a poor chip. Kim finished with a 72-hole total of 17-under 271. It was Kim's fourth LPGA title, including a major at the 2014 Evian Championship, and her first LPGA Tour win in five years. Green's 69 left her in second place. Former University of Arkansas golfer Gaby Lopez finished in a tie for seventh. Lopez shot a 73 on Sunday and finished at 11-under 277.

Paul Barjon of France birdied the 17th hole and closed with a 1-under 69, and then won a three-way playoff with an eagle on the third extra hole to capture his first Korn Ferry Tour title at the Huntsville (Ala.) Championship. Barjon has won three times on the Mackenzie Tour in Canada. The victory Sunday over Billy Kennerly and Mito Pereira moved him to No. 6 on the points list and all but assures him of a PGA Tour card next season. Former University of Arkansas golfer Taylor Moore turned in a 65 on Sunday and wound up in a tie for 11th with a 9-under 271. Tag Ridings (Razorbacks) shot a 68 on Sunday and finished at 3-under 277.

Dean Burmester ended a four-year winless streak in style with a five-stroke victory at the Tenerife Open on Sunday in Tenerife, Spain. The South African closed with a bogey-free 9-under 62 that left him at 25 under for the tournament and secured his first victory since the Tshwane Open in 2017. The 31-year-old Burmester said it had been "four years of struggle, of hard work." Germany's Nicolai von Dellingshausen (68) was second. Former University of Central Arkansas golfer Pep Angles shot a 71 on Sunday and finished at 11-under 273.

Former NASCAR driver Eric McClure died Sunday in Agbingdon, Va., his family and the series said. He was 42. No details were given about his death. McClure had posted on social media as recently as Saturday. The Washington County sheriff's office said McClure's body was sent to Roanoke for an autopsy. McClure was the nephew of former Cup team owner Larry McClure and spent the majority of his career racing in the Xfinity Series. He made 288 career starts over 14 seasons with a career-best finish of eighth at Daytona in 2013. He last raced in 2016.

Athletics left-hander Jesus Luzardo is out indefinitely after breaking the pinkie finger on his pitching hand when he thumped a table while playing a video game before his start Saturday. An X-ray after a loss to Baltimore showed a hairline fracture and Luzardo was put on the 10-day injured list Sunday. Luzardo is 1-3 with a 5.79 ERA over six starts this season.

The Atlanta Braves put catchers Travis d'Arnaud and Alex Jackson on the injured list Sunday. D'Arnaud was placed on the 60-day IL with a torn ligament in his left thumb after getting hurt on a tag play at the plate in the sixth inning of Saturday night's game against Toronto. Atlanta Manager Brian Snitker said after the Braves lost 7-2 to Toronto that d'Arnaud is being set for surgery sometime in the next few days. Jackson, who replaced d'Arnaud in the game, went on the 10-day IL with a strained left hamstring.

Nikoloz Basilashvili clinched his second title of the year with a 6-4, 7-6 (5) victory over Jan-Lennard Struff in the final of the Munich Open on Sunday. The fifth-seeded Basilashvili, who won in Qatar in March, started well and resumed after a 30-minute rain interruption to win his fifth ATP title.

Osaka out in Madrid

Second-ranked Naomi Osaka is out of the Madrid Open as Karolina Muchova won 6-4, 3-6, 6-1 in the second round on Sunday. Muchova eased through the deciding set to earn her third win against a top 10 opponent this year. The 20th-ranked Czech was a semifinalist at the Australian Open, which was won by Osaka in February. 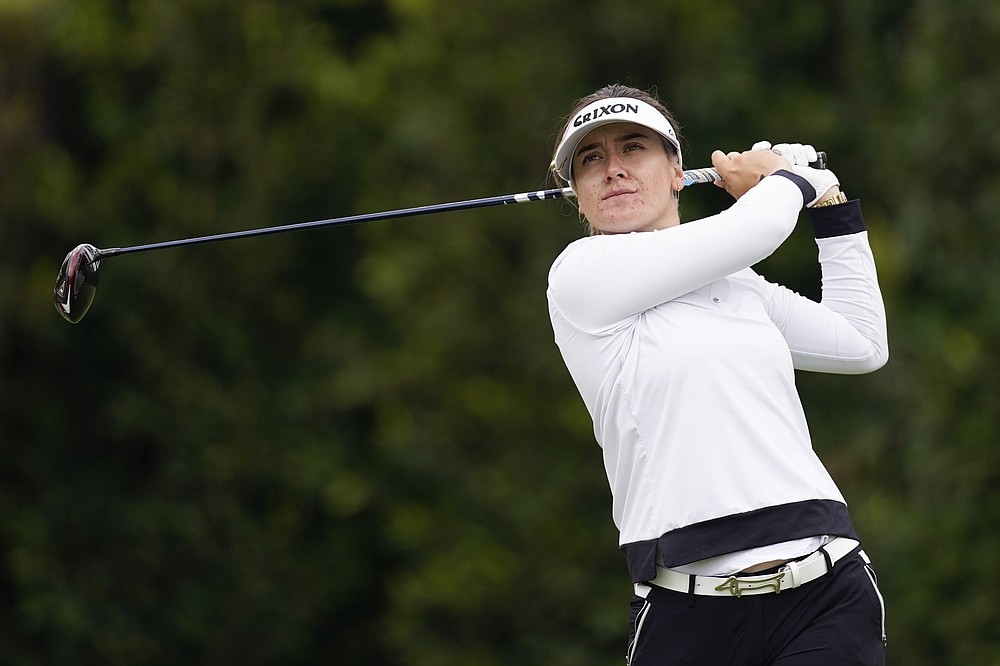 Hannah Green tees off at the second hole during the final round of the LPGA's Hugel-Air Premia LA Open golf tournament at Wilshire Country Club Saturday, April 24, 2021, in Los Angeles. (AP Photo/Ashley Landis) 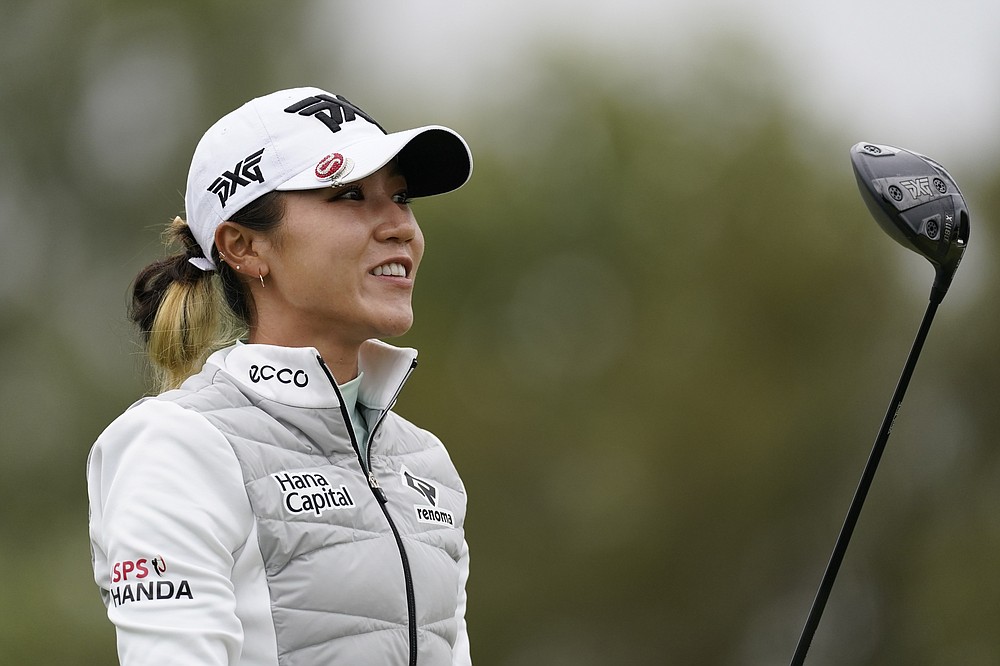 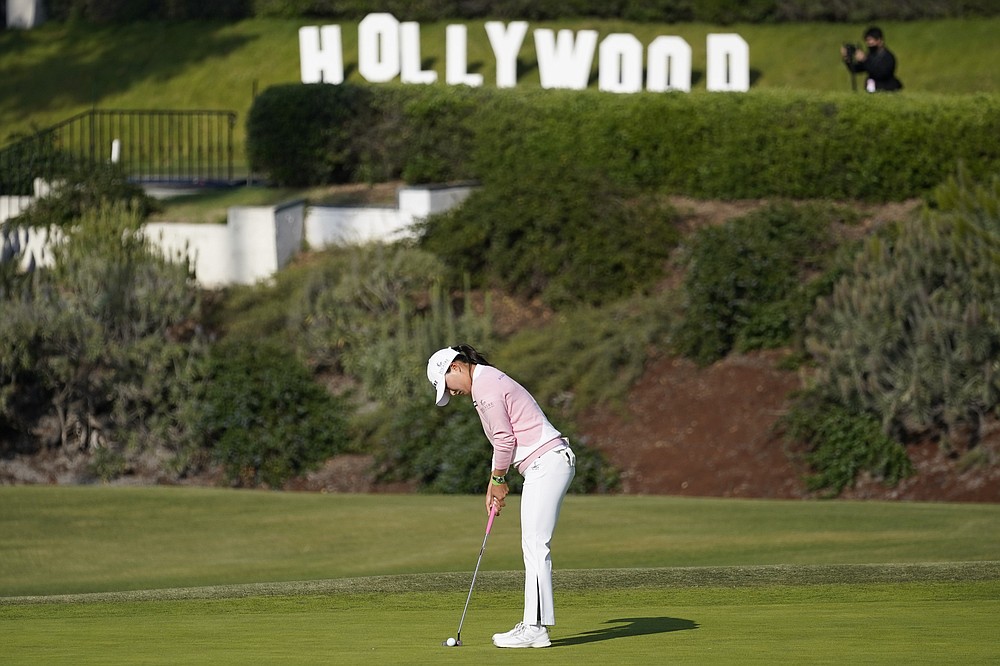