No. 7 Arkansas softball still has work to do 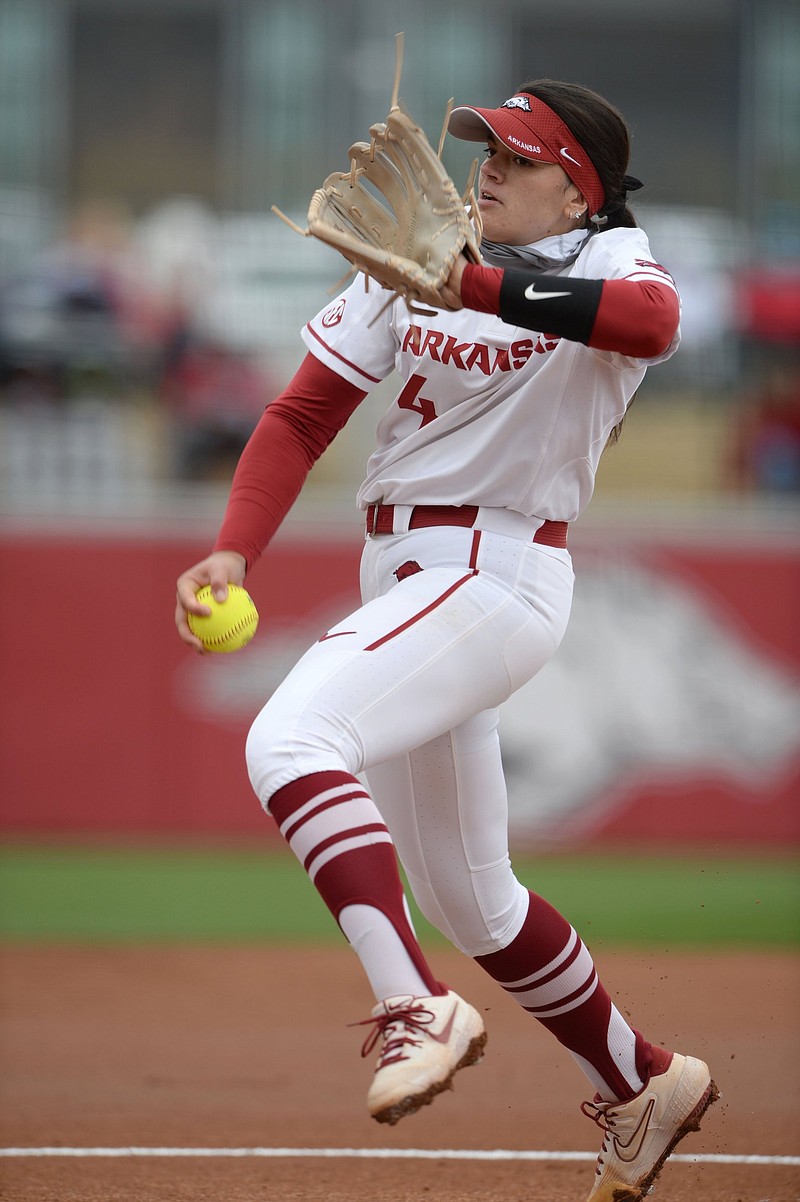 No. 7 Arkansas still has work to do in order to secure its first SEC regular-season softball championship in school history.

The Razorbacks' game against LSU on Sunday was postponed because of inclement weather in Baton Rouge and has been rescheduled as part of a doubleheader beginning this afternoon at 2:30. The first game will be streamed on SEC Network-Plus. The second game, slated to start at 6 p.m., will air on the SEC Network.

League-leading University of Arkansas (39-7, 18-4 SEC) could have clinched at least a share of the title Sunday with a Missouri victory over Florida. But the second-place Gators rallied for three runs in the top of the seventh inning to claim a 3-2 victory in Columbia, Mo., to keep their hopes of an outright title alive.

The Razorbacks can now clinch a share of the title with a win and grab it outright with a sweep of the Tigers (28-16, 10-9) today to close their regular season. They are searching to break the recent stranglehold Florida and Alabama have had on the SEC. A team other than those two hasn't won a title since Tennessee did it in 2007.

Every other team in the league besides Arkansas finishes the regular season next weekend. Florida (37-8, 16-5) hosts Texas A&M beginning Friday.

Arkansas was picked to finish sixth in the SEC Coaches preseason poll. The Razorbacks' best previous finish in the league was third in 2000. That team was the first in school history to reach the NCAA Tournament and has the school record for league wins (19). Teams played 30 league games back then, compared to the current total of 24.

Arkansas snapped a 17-game losing streak in Baton Rouge that dated back to 2005 on Saturday with a 1-0 win. Ryan Jackson's pinch-hit RBI-single in the top of the seventh inning provided the game's only run.

That was enough for junior Mary Haff (22-4), who struck out the side in the bottom of the seventh to finish off her 73rd career victory and 12th complete game of the season. She's now tied with Heather Schlictman for the most victories in school history. The right-hander now ranks fourth in the country in wins, tied for third in appearances and among the top 10 in innings pitched.

Senior Keely Huffine accounted for two of Arkansas' four hits and saved a run with an incredible leaping catch down the right-field line to end the top of the first inning.

Shortstop Braxton Burnside ranks second in the country with 24 home runs and holds the single-season school record. She needs two more to tie the SEC single-season record of 26 shared by Bailey Hemphill of Alabama and Mia Davidson of Mississippi State. They both did it in 2019.