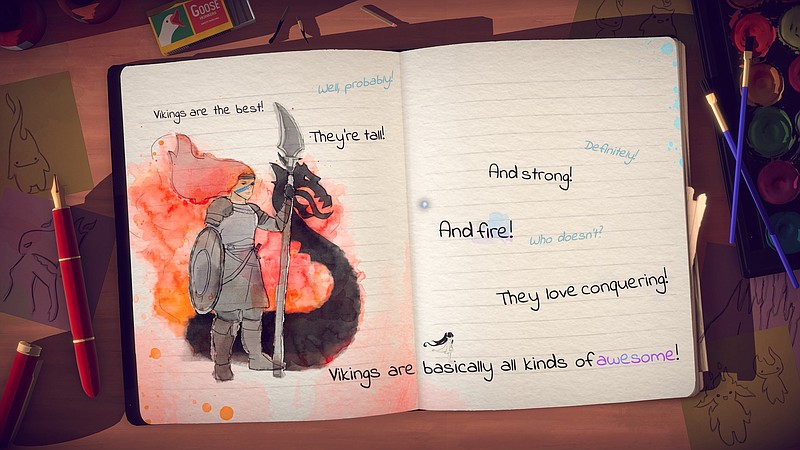 "Lost Words: Beyond the Page" is a gentle puzzle-platformer. (Modus Games)

"Lost Words: Beyond the Page" is a gentle puzzle-platformer. And while being a child — or especially inclined to children's fiction — might be required to fully appreciate its wide-eyed story, its beautiful design and fine animation can be admired by all ages.

When the holidays roll around and friends with young children ask me for video game recommendations, I'll probably mention it.

Written by Rhianna Pratchett, "Lost Words: Beyond the Page" is an ode to the dogged pursuit of creative writing. The game unfolds through the perspective of Isabelle Barbara Cook, a vivacious girl who goes by Izzy.

When we meet her she is given a journal by her maternal grandmother, whose wisdom and easygoing manner she reveres. As Izzy makes her first attempts at finding her voice and articulating her ambition, we watch her words slowly materialize along the page as if she were trying out different forms of line spacing, like an experimental poet.

The fanciful spacing lends itself to some whimsical platforming sections in which players move around a tiny girl who can run along the tops of words. By jumping on certain brightly colored words, the avatar can drive Izzy's narration forward until, eventually, a little tear appears on the page, serving as an exit that results in a page flip or a change of setting.

Some words can be detached from sentences and moved about to create steppingstones so the avatar can leap to otherwise out-of-reach places. Occasionally, words must be shifted about to form simple sentences that express the pearls of wisdom Izzy has received from her grandmother — like the motivational tautology, "A writer is a person who writes." (Don't be a poseur, kids.)

After briefly considering different genres, Izzy decides to write a fantasy story about a girl growing up in Estoria, "a place of peace and magic." Her hero, whose name players can select from three options — Grace, Robyn or Georgia — is an apprentice to the village guardian Elder Eva, who resembles Izzy's grandmother. As players move the young apprentice around Estoria, the words of Izzy's narration scroll across the background as though written by an invisible skywriter.

Upon meeting Elder Eva in her treetop abode, Grace (the name I chose) is given a spell book to hold magic words. The first word she receives is "rise" which allows her to lift objects. By clicking on the left trigger one can open Grace's spell book and then use the right thumbstick and trigger to select a word and guide it to where it can be used in the environment.

Soon after using her first magic word to complete a ritual at a nearby tree, Grace is named the new village guardian by Elder Eva who then announces her plans for retirement.

Alas, not long after Izzy drafts the first episode of her story, she learns that her grandmother has had a stroke and been hospitalized. In the pages of her journal, she tries to make sense of her feelings which are refracted into her fantasy story. A dragon lays waste to Grace's village. Eager to confront the destroyer, she sets out on a quest that takes her to a desert where she meets a djinn who feels guilty for not protecting the realm that was entrusted to him; a cavernous area where she encounters an angry giantess made of flames; a forest where she finds merchants who exchange gifts for memories and voluntary sacrifices; and a grayish landscape where Grace is assailed by doubts and anxiety.

Across her journey Grace acquires additional words for her spell book such as "break," "repair" and "ignore." These allow her to get past simple obstacles — mend fallen bridges, slip past those who would block her way, etc.

"Lost Words: Beyond the Page" is the easiest puzzle-platformer I've played in who-knows-when, but I don't hold that against it. Priority is given to the game's art direction and narration, which benefit from being taken in at a quick clip like a storybook or a cartoon.

Rhianna Pratchett captures the voice of an earnest girl and bends it only slightly to make, age-wise, unusually keen observations. Although the game's story beats were too straightforward for my taste and I couldn't bear much of its syrupy music during emotional scenes, I can well imagine a friend of mine enjoying this with his 7-year-old daughter.

"Lost Words: Beyond the Page" is an exercise in obvious emotions, but its visual style gives it an undeniable charge.

"Lost Words: Beyond the Page”