Milley won’t say if their troops can handle Taliban alone by Compiled Democrat-Gazette Staff From Wire Reports | May 3, 2021 at 2:00 a.m. 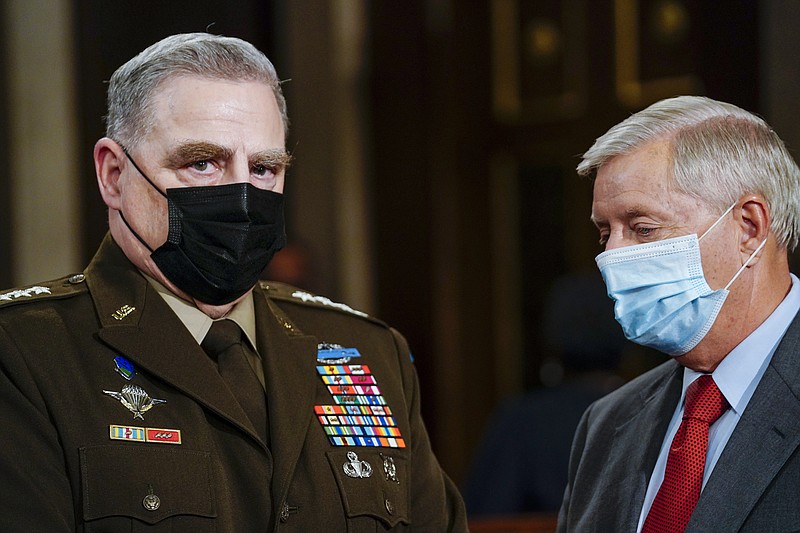 Joint Chiefs Chairman Gen. Mark Milley, left, and Sen. Lindsey Graham, R-S.C., talk as they arrive the chamber ahead of President Joe Biden speaking to a joint session of Congress, Wednesday, April 28, 2021, in the House Chamber at the U.S. Capitol in Washington. (Melina Mara/The Washington Post via AP, Pool)

WASHINGTON -- Afghan government forces face an uncertain future and, in a worst-case scenario, some "bad possible outcomes" against Taliban insurgents as the withdrawal of American and coalition troops accelerates in the coming weeks, the top U.S. military officer said Sunday.

Gen. Mark Milley described the Afghan military and police as "reasonably well-equipped, reasonably well-trained, reasonably well-led." He cited Afghan troops' years of experience against a resilient insurgency, but he declined to say they are fully ready to stand up to the Taliban without direct international backing during a potential Taliban offensive.

The chairman of the Joint Chiefs of Staff, a veteran of the war in Afghanistan, spoke in an interview with reporters flying with him from Hawaii to Washington just hours after the formal kickoff of the withdrawal.

Asked whether he believes the Afghan forces can hold up under increased strain, Milley was noncommittal.

"Which one of these options obtains and becomes reality at the end of the day? We frankly don't know yet." he said. "We have to wait and see how things develop over the summer."

He said there is "at least still the possibility" of a negotiated political settlement between the government in Kabul and the Taliban. This, he said, would avoid the "massive civil war" that some fear could happen.

Milley said it is possible that the withdrawal will be finished before the Sept. 11 target date announced by the White House. He said that date reflects the estimated maximum amount of time needed to move all U.S. and coalition troops, as well as large amounts of equipment, out of the country.

After the withdrawal is over, the United States will provide unspecified "capabilities" to the Afghan military from other locations, Milley said. He did not elaborate on this, but other officials have said those "over-the-horizon" arrangements for supporting the Afghan military have yet to be solidified.

Meanwhile, a searing blaze that roared through dozens of fuel tankers on the northern edge of the Afghan capital of Kabul killed seven people and injured 14 others, the Interior Ministry said Sunday.

Investigators were combing through the tankers that lay in smoldering ruins and a gas station caught in the flames that lit up the area late Saturday, said ministry spokesman Tariq Arian.

There was no immediate indication of whether it was an accident or sabotage.

Arian said the fire began when a spark set a fuel tanker ablaze. Nearby tankers were quickly engulfed, sending giant flames and plumes of smoke into the night sky. The fire in the northern edge of the city engulfed several homes and a nearby gas station. Several structures were destroyed, and electricity to much of Kabul, which usually has only sporadic power, was knocked out.

The injured were being treated mostly for burns in local hospitals.

Firefighters arrived at the scene but their capacity is limited and it took hours to bring the blaze under control. On Sunday morning, flames still flickered in the ruins.

Information for this article was contributed by Robert Burns, Tameem Akhgar, Rahmat Gul and Mohammad Shoaib Amin of The Associated Press.