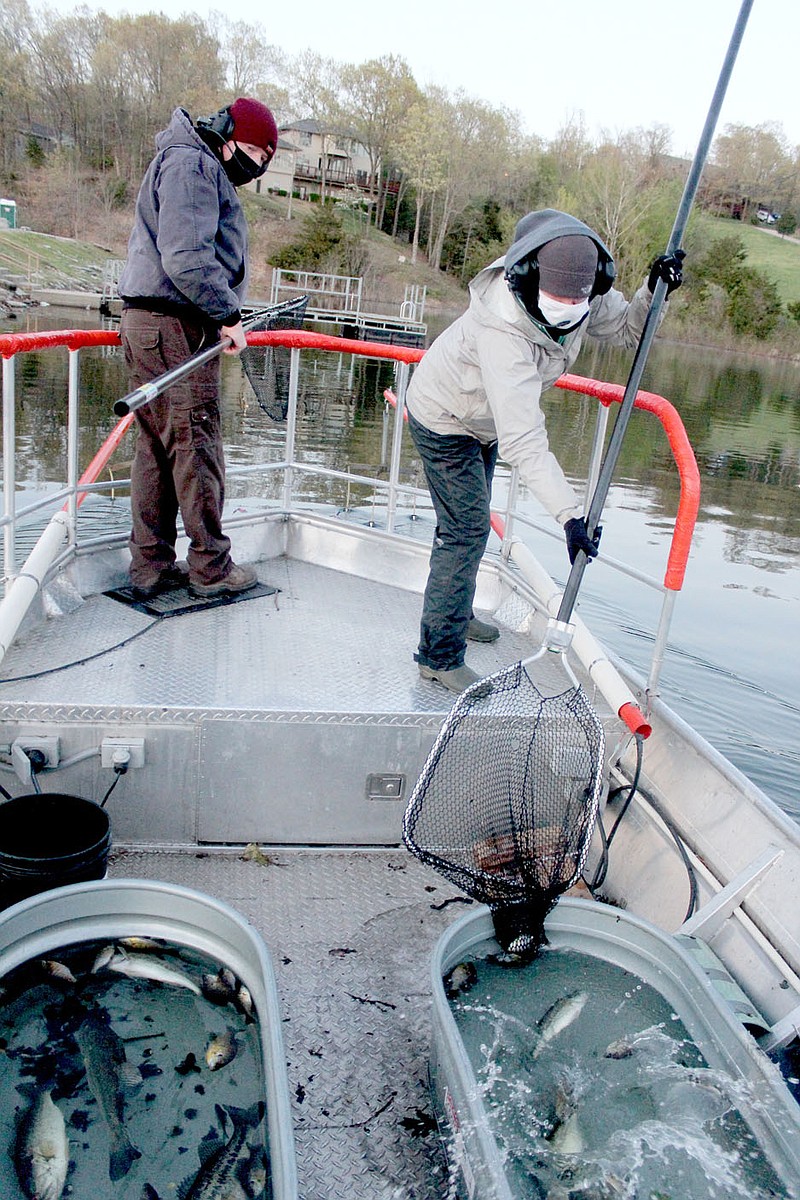 BELLA VISTA -- With a generator rumbling alongside the boat engine, workers dip their nets into the water to remove stunned bass, bluegill, redear and other fish from a Bella Vista lake.

Bella Vista lake staff use electrical probes to stun fish, which are then placed in a tub until they're measured and recorded before being placed back in the lake. These recordings, taken at various points on each lake, are reported to the Arkansas Game and Fish Commission and used to provide valuable insight into the health and overall fish populations of Bella Vista's lakes.

For example, Lake Brittany has some of the larger fish, but there are fewer of them compared to others, lakes and fisheries superintendent Rick Echols said.

"We do it every spring for two weeks," he said. "We take the length and weight of the fish. We're looking for growth rates, among other things. So, if we have a 16-inch largemouth bass that is three years old, that'll show a fast growth weight. The length and weight do that."

They're measured in millimeters because the tiny units provide better accuracy, Echols added, noting workers don't log any fish under 100mm, primarily because their mortality is extremely high at smaller sizes.

A crew makes six 10-minute passes on each lake, covering various areas and measuring, logging and releasing fish after each of them.

Workers will also do a less intense count in the fall to ensure spawns are successful, he added.

The probes create a circuit with the boat's aluminum hull, he explained, and any fish caught between the hull and the probes will be stunned for about 10 minutes, giving workers just enough time to get them measured.

The boat's pilot has a killswitch in arm's reach and one of the netters must stand on a pressure-sensitive mat for the electricity to flow, meaning either can kill power in an emergency, lakes worker Chris Fuller explained.

"Two switches have to be on," he said.

Generally, workers will use direct current at 60 pulses per second, he said.

When it's time to measure, each person has a job -- one records while the other two measure and weigh, respectively, ensuring the fish are processed and returned home quickly.