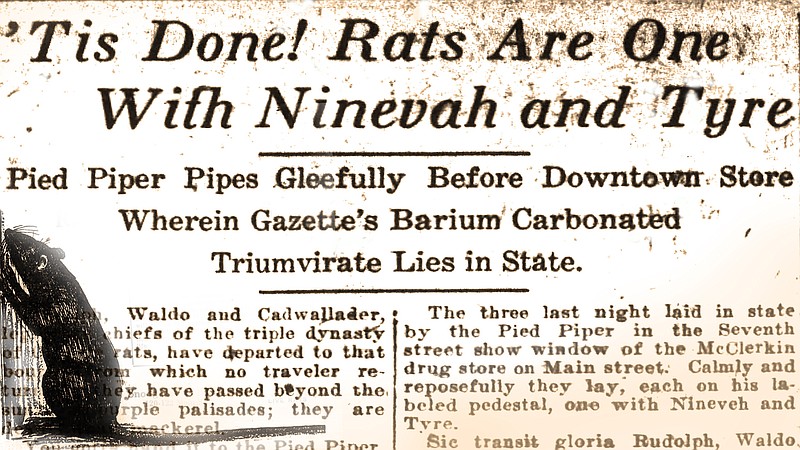 Funny is funny, as various standup comics are said to have said.

The Gazette didn't further identify Nichols, but an item in another newspaper, The Monroe News-Star in that Louisiana city, described him as a former U.S. Public Health Service official who had gone into business for himself. With a team, he traveled the country as a municipal rat exterminator.

His "big offensive" in downtown Little Rock was to begin with a demonstration of methods in the Gazette newsroom. Rudolph, Waldo and Cadwallader were to be served "a three-course luncheon, consisting of cheese salad with barium carbonate dressing, underdone beef au jus a la barium carbonate, and a vegetable compote maitre d'hotel with barium carbonate."

The Gazette reported that Nichols' team used "barium carbonate exclusively" — although sometimes the reporter called the poison "barium chlorite" or "barium chlorate." Whatever, it was mixed into three kinds of food.

"The rat is a highly intelligent animal," Mr. Nichols said, "but we have found that he can't count to three. He will avoid two baits, but his suspicion does not run as far as the third one."

He expected to kill or scare away 75% of the city's rats and that they would stay gone about a month, when a followup poisoning campaign would be needed.

Barium carbonate is an inhumane method. The reporter tasked with this story seems not much affected by thoughts of humane methods.

What follows are chunks from three reports published in the Gazette on May 1, 2 and 3, not in italics and not set in quotation marks. Alert Reader must keep firmly in mind that these are archival, journalistic sentences and not written by me:

According to Col. Dick Brugman, veteran member of the Gazette staff, Rudolph, the oldest one, moved to Little Rock with the paper when it was brought up from Arkansas Post, and Waldo and Cadwallader practically ate up the edition of the Gazette that carried the story of President Lincoln's assassination.

Each has been the target of three generations of newspaper men, and they are identified by their scars. Their names were tacked on them comparatively recently. Before the influx of feminine members to the Gazette staff, they were called by far more virile and descriptive cognomens.

It may be that barium chlorate will fix their clocks, but a two-pound chunk of type metal thrown at point blank range — that is how Cadwallader got his hump back — has proven ineffective, and the whole trilogy has grown fat on vitriol, arsenic and similar confections.

At an early hour this (Monday) morning, Rudolph, Waldo and Cadwallader, patriarchs of the Gazette newsroom rat tribe, still were with us. Rudolph, however, was shy another half inch of tail. In slamming a pair of scissors across the room at him the city editor did not "lead" him enough.

The Pied Piper arrived early last night, however, and laid the banquet board, various viands garnished with barium chlorite. By 8 o'clock this morning, if all signs don't fail, and this advertisement pays, the Gazette porter should be engaged in the work of harvesting the extinct and defunct corpses of Rudolph, Waldo and Cadwallader from the newsroom ceiling.

According to J.L. Nichols ... an Eastern client of Mr. Nichols whose cellar was infested with rats in massive doses spread barium chlorate about the premises in habit forming quantities. In a day or so all rats had disappeared, yet not a single corpus delectu had been found.

After searching throughout the place without locating a solitary remains, the owner of the place opened up his cellar throughout for a more exhaustive search. Presently, noticing a rustling sound above him, he glanced up and there upon the ceiling drifting to and fro in the slight air currents were the bodies of several hundred rats.

After eating the barium chlorate, they had drunk copiously and the combination had just naturally swelled them up like toy balloons at a circus. Mr. Nichols omitted to present affidavits on this story.

Rudolph, Waldo and Cadwallader, legendary chiefs of the triple dynasty of Gazette rats, have departed to that bourne from which no traveler returneth. They have passed beyond the sunset's purple palisades; they are deader than mackerel. ...

Rudolph and Waldo were found stark and cold about 6 o'clock yesterday morning. They had left their lairs when the pallid hand of death gripped them by their innards, and had staggered forth in search of companionship, some congenial soul to bid them farewell and godspeed on the Last Lone Trail.

They died in the managing editor's office. Mr. Nichols says that a barium-stricken rat always looks for something to drink. Rats have unerring instincts.

Cadwallader bumped off under the city editor's desk. The end had not been easy. His tail — Cadwallader's — was kinked into a true lovers' knot and his right arm was extended in the abandoned suppliant gesture of a crapshooter who seeks Feevy or Little Joe, or some of these other two-way points.

The three last night [were] laid in state by the Pied Piper in the Seventh Street show window of the McClerkin drug store on Main Street. Calmly and reposefully they lay, each on his labeled pedestal, one with Nineveh and Tyre.

Deceased-es were born at some indeterminate period between November 1820, when the Gazette first began publication, and five years ago. Waldo and Cadwallader are survived, in all likelihood, by two parents, four grandparents, eight great grandparents, ad infinitum; and under the laws of probability, by a couple of thousand children each, 4 or 5 million grandchildren, and a mess of great grandchildren in geometrical progression.

Rudolph had the same number of progenitors, but his line passed when he fell off. ... Rudolph was a bachelor; a cynical misogynist.

When the clear call came for Rudolph there was no filial hand to brush the crumbs of barium carbonate au gratin from his quivering van dyke, nor compose his limbs for that deep and dreamless sleep which joins time and eternity. There were no little feet to patter about his bier. No tribal squeak to mark his passing. 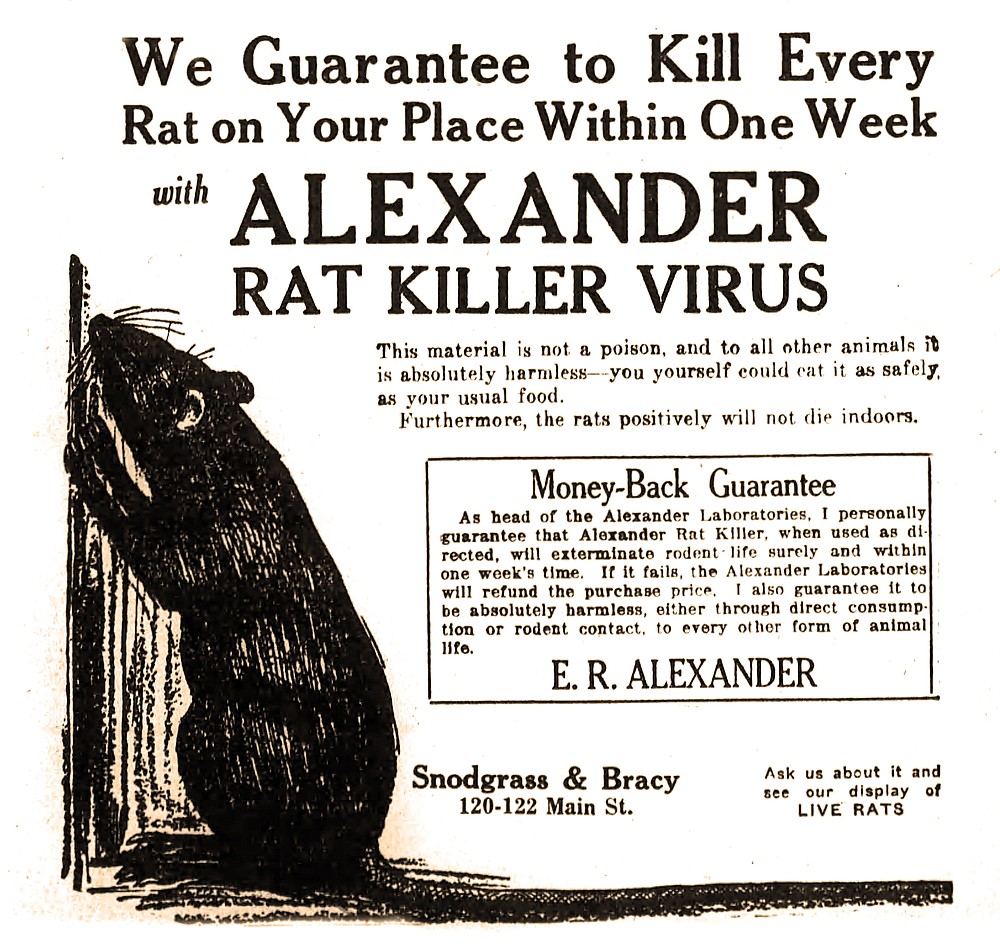