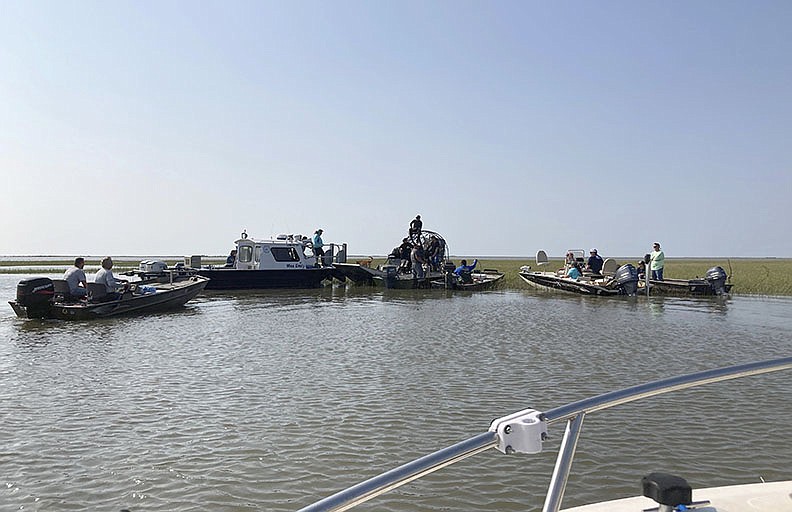 Volunteers gather Thursday on the Louisiana coast (left photo) before setting out to look for survivors of the Seacor Power. The United Cajun Navy, a non-profit that helps out during disasters, has been helping organize the search effort. (AP/Rebecca Santana)

COCODRIE, La. -- The volunteers gather around a map, suntanned fingers tracing over the bayous, lakes and islands where they'll search. They talk about where they've already been and where they'll go today. They make sure everyone has food and water and knows the radio channel to use. They gather in prayer and then set off for another day of searching for those still missing from the capsized Seacor Power.

"Lord, we got some families that are hurting," says one of the men as nearly 30 people bow their heads in prayer. "Please give us the ability to find something today."

On April 19, after a search covering 9,000 square miles, the Coast Guard officially ended the effort to find survivors of the lift boat that flipped over in hurricane-force winds about eight miles off the Louisiana coast on April 13. In a statement Tuesday, the ship's owner, Houston-based Seacor Marine, said it was focusing on salvage operations and recovering the ship.

But at a dock in southern Louisiana, volunteers aren't giving up. They've been setting out in planes, boats and hip-high waders in hope of finding anyone still alive from the lift boat, a platform ship with retractable legs that services offshore oil and gas facilities.

Nineteen people were aboard the Seacor Power when it failed to weather the storm. Six men were rescued. Six bodies have been recovered from the sea or from divers inside the vessel; seven people are still missing.

Scott Daspit still holds onto hope that his son Dylan is still alive. Speaking to the people heading out to search, he said any survivors would likely be covered in mud to ward off mosquitoes. He urged them to concentrate on the few trees that would provide the only shade in the hot, flat landscape.

In a quieter moment, Daspit said he'd taken hope from a volunteer who told a story of how he'd survived for days floating out at sea.

"It gave me a renewed spirit," Daspit said. "But I have to assume that ... if we do find anybody alive, they're going to be very hurt because nobody's standing up and waving us down."

Later, as he began to choke up, he said: "If we can find one soul it'll be worth it."

Like other family members, Daspit has been frustrated from the start with the rescue efforts. In the immediate days after the ship capsized, a ship owner took Daspit, who's worked in the oil industry for decades, near the Seacor Power so he could see for himself what was going on.

The whole country benefits from oil and gas extracted in the Gulf and the tax revenue it generates, Daspit said, but few appreciate how risky the work can be.

"From the roustabout, to the company man, to the engineer on these jobs, everybody puts their lives in danger," he said.

It could take as long as two years for a National Transportation Safety Board investigation to determine what happened.

The United Cajun Navy, a non-profit that helps out during disasters, has been helping organize the search effort. Todd Terrell, who heads the organization, said they have found life vests, life rings and items from the interior of the boat such as doors or cabinets and clothes. He knows at some point they will have exhausted all their efforts. But, he said, they're not there yet.

Many of the volunteers are from the surrounding area, others arrived from farther afield. Mike Asher, a longtime fisherman, drove out from Lake Charles in western Louisiana after a friend who knew someone on the capsized boat asked if he could help. As Asher guided a small watercraft, he recalled how people had gone to help his hometown after Hurricane Laura ripped through the city in August.

"People came from all over and helped us. I definitely felt like I should give something back to people," he said. "It's searching for a needle in a haystack. But if you don't look, you don't find."

Others have been searching from seaplanes. A team with dogs trained to search for cadavers also arrived. Groups on ATVs have combed beaches as far away as the Texas border.

On Thursday, an air boat, which can travel over marsh or land, combed through the grasses while others rode flat-bottom boats looking for clues. Well-wishers have arrived with food and drink, assembled underneath a raised building at the dock. Volunteer Ronnie Adams, who appeared on the History Channel's "Swamp People," has posted online updates viewed by thousands of people.

Mark Theriot, a 63-year-old shrimper, said he's been going out every day simply because Scott Daspit and the other families need help.

"I really don't have much confidence that we're going to find anybody, but the man wants to go and I'm going to go," Theriot said. "I'm coming for the family, to give them support. They got help. They're not by themselves." 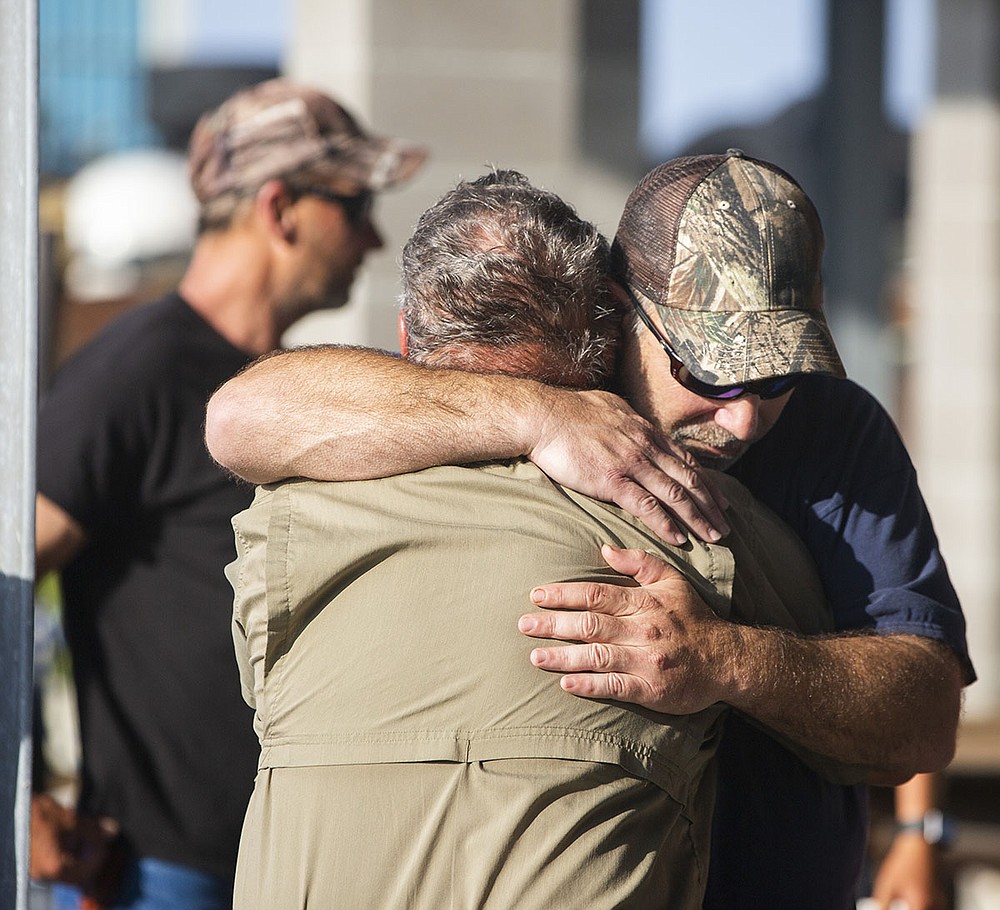 Scott Daspit, father of missing crew member Dylan Daspit, gets a long hug of support Thursday at Harbor Light Marina in Cocodrie, La. “If we can find one soul it’ll be worth it,” Daspit said. (AP/The Advocate/Sophia Germer)
ADVERTISEMENT