The Hills Are Alive! Sounds of opera return to Inspiration Point 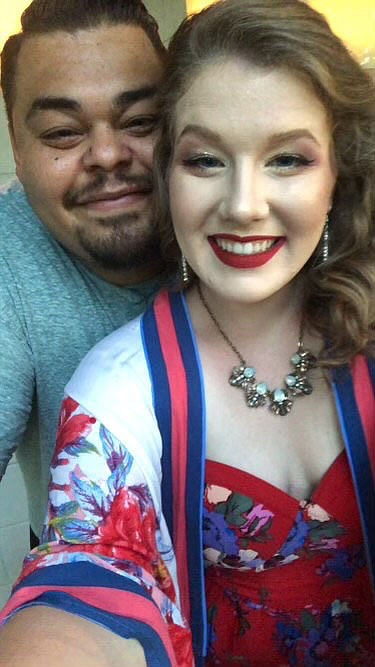 Perry Chacon and Emily Dirks met at Opera in the Ozarks in 2019. After a covid-forced hiatus, they’ll return to the stage (and each other) for July performances. (Courtesy Photo/Emily Dirks)

If the idea of an opera performed in French or Italian is intimidating, Emily Dirks and Perry Chacon want to change that misconception.

Dirks and Chacon will both perform this summer at Opera in the Ozarks. But neither of them came from a classical musical background. Dirks says she started singing when she was 7, "wanting to be just like my dad who plays and sings country music." And Chacon "started my singing journey as a Mariachi singer, so I don't think that I could ever forget my roots."

The two are looking forward to returning to the Eureka Springs opera company to perform this year in Massenet's "Cendrillon," the retelling of the beloved fairy tale Cinderella with equal parts madcap comedy and heartfelt romance; Donizetti's "Lucia di Lammermoor," the tragic tale of the bride of Lammermoor; and an abridged family version of Mozart's fantastical yarn "The Magic Flute." Artistic director Tom Cockrell is calling the season "Tying the Knot," but Dirks and Chacon probably aren't quite ready to do that yet, even though they did meet and start a relationship at Inspiration Point in 2019.

"Perry pretty much had me at 'hello' when we met on the first day of the program," says Dirks, who is a voice instructor at her alma mater, Luther College in Decorah, Iowa. "We soon discovered we were performing in the same production, 'La Boheme.' Perry having a fantastic voice was just one of many other aspects I grew to admire about him as a musician and person. He is working so hard on his upcoming role in 'Lucia di Lammermoor' -- you do not want to miss his performances!"

"It was a fun cast, and we got to share the stage together during rehearsals since we were cast on opposite nights," adds Chacon, who is working on his Doctor of Musical Arts at the University of Nevada, Las Vegas. "It was truly great to see Emily perform when I was in the chorus on my off-nights. She is amazing!"

Dirks says her path to opera started with her interest in solo piano.

"While preparing a Mozart sonata for a piano contest, I realized an opera singer would be able to sing the melody I was playing with the same finesse I was working to achieve," she remembers. "Even though I had no idea what I was doing as far as vocal technique, I started to internalize the piano melodies by singing them. My piano teacher encouraged this further by having me put words and stories behind the music. Growing my interest in opera allowed me to combine my love of concert music and storytelling."

Chacon says he was invited to perform in the chorus of "Die Fledermaus" in high school.

"I let them know that I had never been in an opera before, but a friend came to me and said, 'You like parties?' and I said, 'of course'. 'The part of this show that you will be in is basically a huge party!' So, I said yes to the show and fell in love with the opera."

"One of opera's most defining characteristics is that singers do not use microphones to project their voices," adds Dirks. "For this reason, aspiring singers undergo years of training centered around being able to healthily amplify their voice. Being able to do this successfully results in the human body offering its most natural and unedited sound. I believe this fact alone makes opera one of the most fascinating and vulnerable art forms."

Chacon says he hopes audiences will "come and enjoy themselves and appreciate that the arts are coming back even stronger after the pandemic." And, he adds, opera goers can see the "future of the art form" in the performances by singers like Dirks and himself.

"I would love for audiences to let the music and stories encourage a brief escape from all the challenges facing our world," adds Dirks. "Despite the pandemic, the arts are back and stronger than ever!"

Opera in the Ozarks

WHERE — Opera in the Ozarks theater at Inspiration Point, 16311 U.S. 62 West, Eureka Springs

FYI — In addition to the three operas in repertory, there will be two special performances, “Crazy Mixed Up Opera” on July 17 and Scenes: Opera and Broadway, July 21.