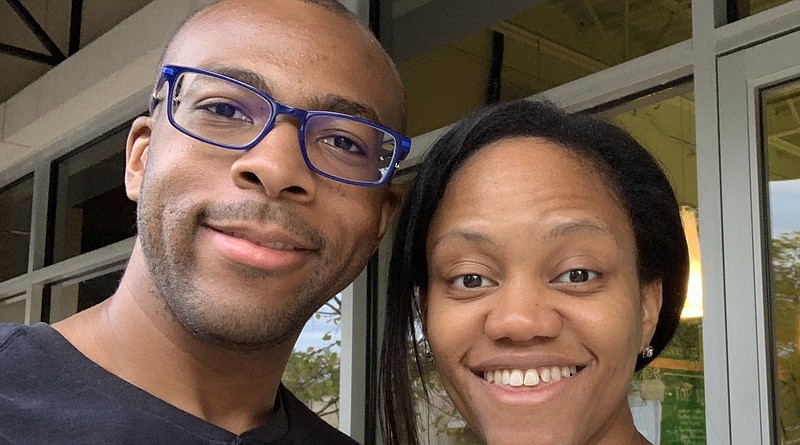 Dr. Chara Green and Reggie Fisher set out on individual paths to cull their debt, and they found their way to an enriched life together.

Reggie first saw Chara across the foyer at Fellowship Bible Church in 2012, shortly after he became involved with the young adult ministry there.

He didn't know who she was until 2015, when her mother was a student in the Dave Ramsey Financial Peace University course he was leading.

Chara had completed a pediatric residency at Arkansas Children's Hospital in Little Rock by then and was working in Knoxville, Tenn. She had gone through the Financial Peace University and afterward had decided to send her mother through the course.

"My mom called me after the first or second class and said, 'The leader of my class was a really nice young man,''' Chara says. "I'm like, 'Even if there is a nice guy in your class in Little Rock, I don't live there. My life is here.' I wasn't hopeful, but I was also curious.''

She regularly listened to Dave Ramsey's podcast, though, and at some point heard a guest identified as "Reggie in Little Rock."

"I thought, 'I think that's the name my mom said, so I went on and changed so I could see the video of the podcast, and I was like, 'Oh, my mom didn't tell me he was good-looking,'" she says. "Listening to his story I was really inspired, and I was in the middle of paying off debt from school and it motivated me as a single person."

She was in Little Rock visiting her mother for Christmas that year and Reggie saw them sitting together at church.

"I always give credit to the Holy Spirit for doing this because it's just not something in my character to do," Reggie says. "I actually was pretty far away from where they were sitting in church. I just went over and kind of introduced myself and kind of played it cool to get some information."

"I just launched into, 'Wow, I saw you on the Dave Ramsey Show. You've inspired me to get more serious,'" she says.

Her mother finished the class, and Chara didn't hear anything more about Reggie until the fall of 2016, when he emailed her mother asking if she and Chara would be willing to come and speak to his students.

Chara's mother surmised that this was a ploy for Reggie to connect with her. She was right, he concedes.

"I had always said I wasn't going to fall in love with someone from another state. I did not see how that was going to work out," he explains. "That's just another glimpse of God's hand in this story. I just felt like this was a chance, that it was a very unique situation. It just felt right. So I reached out just to see what might happen."

Chara and her mother did give their testimonies to Reggie's class that November, with Chara explaining how she had paid off her medical school debt. She and Reggie had texted back and forth about what would be expected, but their conversations had stayed on topic and she couldn't gauge his interest from them. He remained reserved while she was in town, and she went back to Knoxville without any change.

Chara went on a medical mission trip to Haiti in 2017, and Reggie was going on a mission trip to Italy, and they decided to get together and discuss their experiences while she was in town for Easter.

They went to a coffee shop, where they spent hours discussing everything but mission trips. She invited him to dinner at her mother's house the next night. He had mentioned before that he liked Japanese anime and, Chara, who had lived on a military base in Japan as a child, gave him some of her favorite Japanese snacks.

"It was really special because that taught me that she really listened to what I was sharing about my interests," Reggie says.

During a phone call a few days later, with Chara back in Knoxville, Reggie asked if she would like to be more than friends. He was, he told her, interested in pursuing a relationship.

"I wanted to be clear about my intentions, especially because she was in another state," he says.

Chara, who says she was grinning from ear to ear, affirmed.

She was back in Little Rock for Mother's Day, and she scheduled a job interview at Arkansas Children's Hospital while she was in town. She got the job and moved back to Little Rock in July 2017.

They exchanged their vows on July 7, 2018, at Fellowship Bible Church in Little Rock.

Chara is a hospitalist at Children's and Reggie is financial technology consultant at FIS Global. They have a 17-month-old son, Isaac.

"Dave Ramsey is definitely a key intersection for us meeting," Reggie says. "We are pretty involved in serving our church by way of his company. We actively teach his class and use his principles in how we steward our finances."

She says: “I thought, ‘OK. He’s handsome.’ I was impressed by his wise words, genuine smile and calm vibe.”

He says: “I thought ‘Now that’s someone I could date. I wonder if she’s single.’”

She says: “After our friends and family came together and the last-minute details were done, I was calm and so excited to be married to Reggie.”

He says: “It was such an amazing celebration of who we wanted to become as a couple — filled with each of our personalities, yet blended together marking a beautiful beginning of a Christ centered marriage.”

He says: “Communicate more than you think you should and deliver it in a way that is filled with grace.”