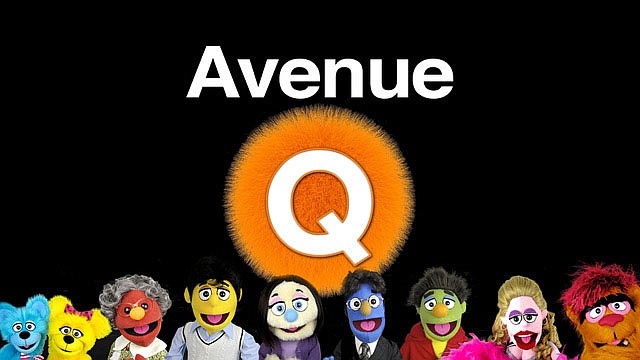 What do mouthy puppets with relationship issues have in common with brothers Nick and Nigel Bottom, who are desperate to write a hit play but are stuck in the shadow of that Renaissance rock star known as "The Bard"? Mix in Steve Martin's quirky sense of humor, an irreverent, girl-powered comedy set during the French Revolution and a new musical straight from Broadway that's filled with the biggest songs of the '70s, and what you have is Arkansas Public Theatre's Season 36.

The lineup was announced April 30 with great joy -- and no small amount of relief -- at a SeasonLeaks! celebration at the Victory Theatre in Rogers.

APT was among the lucky arts organizations during the year of the pandemic, says Joseph Farmer, the executive director.

"We were only shuttered for about seven months," he says. "Having film screenings starting in October 2020 helped our front-of-house staff and volunteers learn to safely have audiences inside The Victory. As guidelines and best practices became available, APT was quick to adjust to whatever we had to do to keep our doors open and our patron base engaged."

"Once it became clear vaccines were going to be a real thing, and once it became clear that eventually, everyone who wanted to be vaccinated would be vaccinated, I was satisfied we were heading in the right direction," Ed McClure, one of the company's founders and its artistic director, says of announcing a new season. "Props to APT Treasurer Joe March for being a wise financial guy and guiding us -- along with APT Chairman Kris Isham -- through this dark time. Thanks to them, and the support of the sponsors, board and volunteers-- we adapted and (hopefully) have survived!

"Our revamped Season 35 worked because the shows were small and didn't require a huge amount of stagecraft for production. That allowed for one show to close and another to open in a two-week turnaround."

That's where the bad news comes in. The traditional musical culmination of every season will not happen this summer, McClure says, because of concerns about the continuing risk of the coronavirus in a production with a large cast and lots of technical staff. So, "The Best Little Whorehouse in Texas" had been canceled.

"I think I knew this musical might still be dicey given the time frame for production versus the actual control of the pandemic," McClure says.

"APT had a summer series for a couple of years called Summer Rep, but it was really just shows in rapid succession," says McClure. "For 'Our Town' and 'Inherit the Wind,' we will literally alternate the titles each night."

Auditions will be June 7-8.

As for Season 36, McClure says the fall opener, "Avenue Q," has been on his bucket list since seeing it on Broadway years ago.

"It's a small, hilarious, naughty musical that will fit nicely on the APT stage," he enthuses. "This seemed like the right sized show to be our first post-pandemic musical."

Season 36 also marks the return of a three-musical slate.

"'Something Rotten' is something hilarious and was a huge hit on Broadway, running for over a year," McClure says of the February offering set in the Renaissance. And, coming in summer 2022, "'Disaster!'is a new show with old music that spoofs the era of the disaster movies. It's like all the disaster movies of the '70s and '80s rolled into one hilarious spoof."

Rounding out the season are "A Fox on the Fairway," a farce by APT fan-favorite Ken Ludwig, who also wrote "Lend Me A Tenor" and "Moon Over Buffalo," in October; a kids' classic, "The Best Christmas Pageant Ever," in December; "Meteor Shower" by Steve Martin, the play that never opened as the pandemic swept into Northwest Arkansas in 2020, scheduled for March 2022; a new comedy by Lauren Gunderson about four "bada--" women dealing with the French Revolution; and Yasmina Reza's "Art," winner of the 1998 Tony Award for Best Play and the 1996 Olivier Award for Best Comedy.

McClure says he's able to land shows that have so recently been on Broadway because he takes the advice of his respected law professor, the late Robert A. Leflar: "It never hurts to ask." 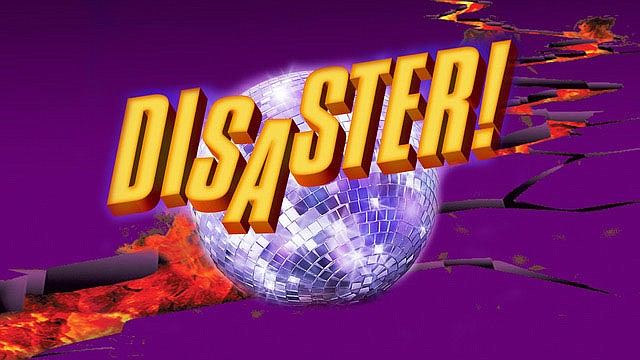 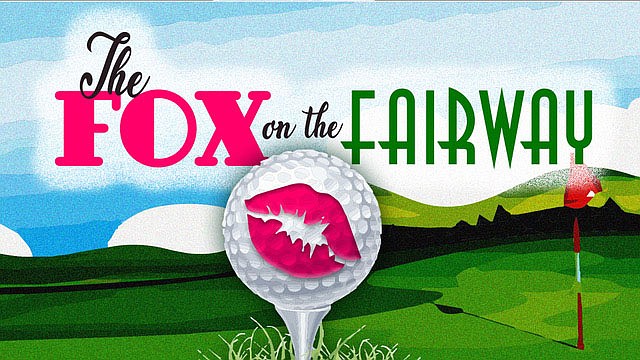 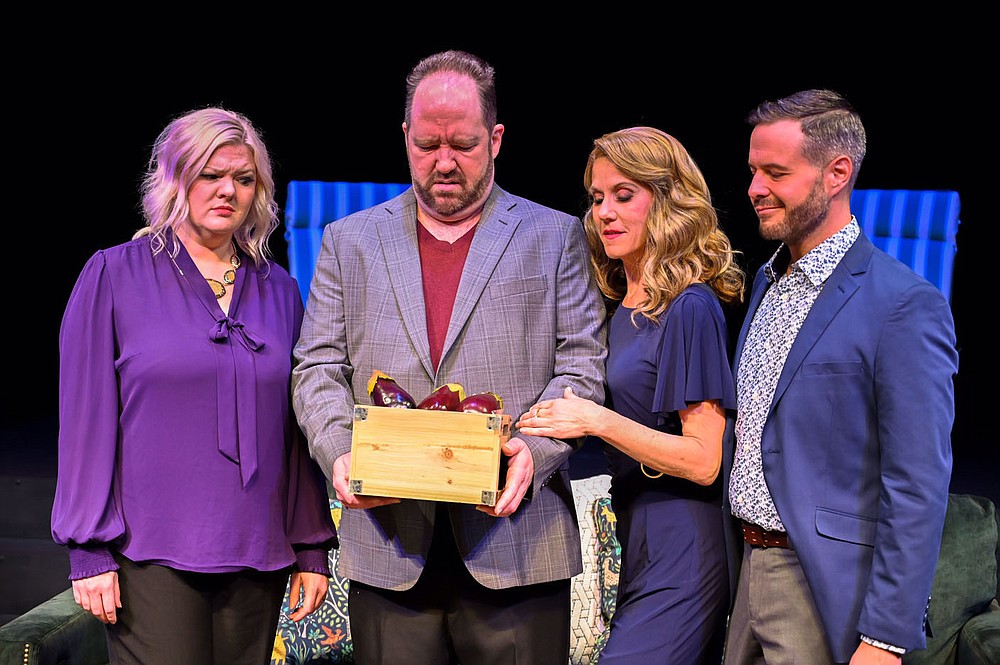 Corky (Stephanie Whitcomb, left) and Norm (Scott Kammerzell, second from left) aren’t sure what to make of the unusual gift of eggplant that’s appeared along with two unusual guests, Laura (Amy Eversole) and Gerald (Joseph Farmer) in the Arkansas Public Theatre 2020 production of Steve Martin’s “Meteor Shower.” The show was ready to open when the pandemic shut down live theater. Now it’s back on the APT schedule for Season 36. Director Ed McClure hopes to have the same cast. (Courtesy Photo/APT) 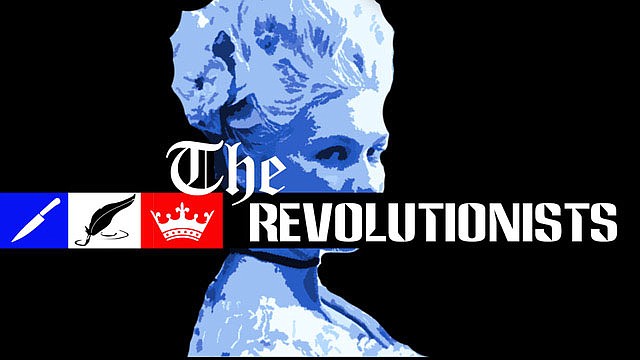 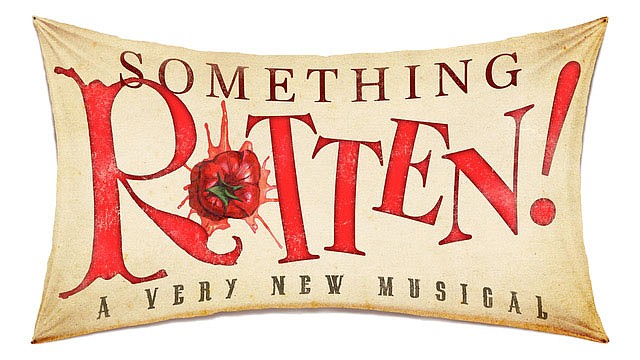 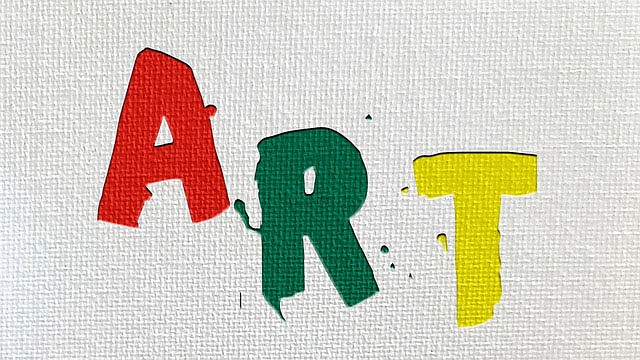 “Avenue Q” — Although the show addresses humorous adult issues, it is similar to a beloved children’s show: a place where puppets are friends, Monsters are good, and life lessons are learned as a recent college grad named Princeton moves into a shabby New York apartment all the way out on Avenue Q. Show dates: Sept. 10-12, 16-19 & 23-26. Auditions: July 26.

“A Fox on the Fairway” — Filled with mistaken identities, slamming doors and over-the-top romantic shenanigans, it is a charmingly madcap farce about love, life and man’s eternal affair with golf. Show dates: Oct. 29-31 & Nov. 4-7. Auditions: Sept. 13.

“The Best Christmas Pageant Ever” — In this hilarious Christmas classic, a couple struggling to put on a church Christmas pageant are faced with casting the Herdman kids — probably the most inventively awful kids in history. Show dates: Dec. 10-12 & Dec. 16-19. Auditions: Nov. 1.

“Something Rotten” — Nick and Nigel Bottom set out to write the world’s very first musical. But amidst the scandalous excitement of opening night, the Bottom Brothers realize that reaching the top means being true to thine own self — and all that jazz. Show dates: Feb. 11-13, 17-20 & 24-27, 2022. Auditions: Dec. 13.

“Meteor Shower” — Corky and Norm are excited to host Gerald and Laura at their home in the valley outside Los Angeles to watch a once-in-a-lifetime meteor shower. But as the stars come out and the conversation gets rolling, it becomes clear that Gerald and Laura might not be all that they appear to be. Show dates: March 25-27, March 31-April 3, 2022. Auditions: Feb. 14, 2022.

“The Revolutionists” — Playwright Olympe de Gouges, assassin Charlotte Corday, former queen (and fan of ribbons) Marie Antoinette, and Haitian rebel Marianne Angelle hang out, murder Marat, and try to beat back the extremist insanity in 1793 Paris in this new comedy by Lauren Gunderson. Show dates: May 6-7 & May 12-15, 2022. Auditions: March 28, 2022.

“Art” — How much would you pay for a white painting? Would it matter who the painter was? Would it be art? One of Marc’s best friends, Serge, has just bought a very expensive — and huge — painting that’s all white with white diagonal lines. To Marc, the painting is a joke, but Serge insists Marc doesn’t have the proper standard to judge the work. Show dates: June 17-18 & June 23-26, 2022. Auditions: May 9, 2022.

For season ticket information, call the APT box office at 631-8988 or visit arkansaspublictheatre.org.