Plant Board decides virtual hearing on dicamba use fits bill 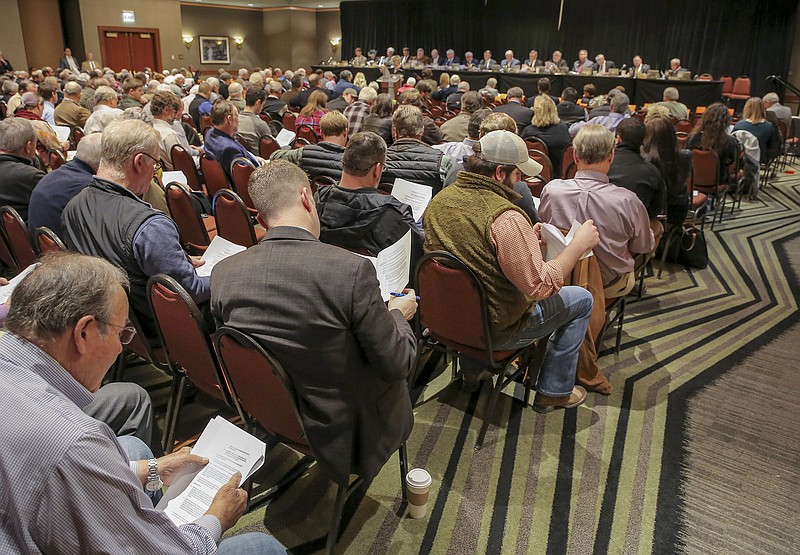 People fill a meeting room at the Embassy Suites Hotel in west Little Rock for a state Plant Board hearing in February 2019. That session cost $10,074, including coffee and other drinks for the crowd and lunch for the Plant Board and staff. Monday’s hearing will be held online at a Zoom cost of $101 for 1,000 viewers. (Democrat-Gazette file photo)

After holding three public hearings in the ballroom of a Little Rock hotel, the state Plant Board will render its next major decision on dicamba via Zoom.

The continued effects of the coronavirus pandemic forced the move online, starting at 9:30 a.m. today. Public comments will be restricted to the 31 people who had registered by the close of business hours Thursday.

The board will hear public comment on whether to set a June 30 cutoff for farmers' use of in-crop dicamba formulations on soybeans and a July 30 cutoff for cotton.

The staff at the Department of Agriculture, the umbrella agency for the Plant Board, has been preparing for the meeting for several weeks, said Scott Bray, director of the department's Plant Industries Division.

The Plant Board considered holding the hearing again in a ballroom of the Embassy Suites hotel in west Little Rock, Bray said. The room had been set up for a crowd of about 500 in the three previous Plant Board public hearings there.

"A couple of board members preferred meeting in person, so we had discussions about that," Bray said. "We had a concern of not being able to predict how big of a crowd we might draw. Not wanting to turn anyone away or not wanting to logistically manage a large crowd, especially with covid conditions, we just decided Zoom was probably the safest and most manageable option."

The agency upgraded its Zoom package from 500 viewers to 1,000, Bray said. The hearing can be accessed at https://tinyurl.com/b4y5w4tf .

"It [a virtual hearing] does allow a lot of participation for some people who might not want to drive, or can't drive, to a place for an in-person public meeting," Bray said. "They can sit home and Zoom in and participate almost as well."

The June 30 and July 30 dates mirror cutoffs set last fall by the federal Environmental Protection Agency. States are allowed to set stricter regulations than the EPA standard but generally cannot make them looser.

Arkansas has had the strictest by-the-calendar cutoffs in the nation, although soybean-producing states in the Midwest have set restrictions based on the calendar and temperatures.

Arkansas didn't have a calendar-date restriction in 2017 -- the first year for in-crop dicamba formulations -- until a flood of complaints of dicamba damage led the board that summer to enact a midseason emergency ban. Complaints of damage to crops and vegetation not tolerant of the herbicide ultimately topped 1,000 that year.

The 2017 experience led to an April 15 cutoff for 2018. Shifts in the board's membership -- appointments by Gov. Asa Hutchinson -- led to longer spraying seasons. Farmers had May 25 cutoffs for the 2019 and 2020 growing seasons.

In December, the Plant Board retained the May 25 cutoff for this year and rejected a June 15 date, only to reverse the decision three months later.

"Since this meeting is to discuss a little bit of a shift in the board's position, it could potentially draw more of an audience," Bray said.

Leasing the hotel meeting room in 2019 cost $10,074, including coffee and drinks for the crowd and lunch for the Plant Board and staff members, Bray said. The cost of the Zoom account, with the upgrade to 1,000 viewers, increased from $14.50 a month to $101, he said. Bray said the account probably will be switched back to the 500-viewer limit after the hearing.

In recommending the federal label on March 3, the board in its 8-7 vote didn't hear testimony from UA weed scientists, farmers on either side or manufacturers of pesticides. It heard only from H. Tyler Hydrick, a Jonesboro crop consultant who had filed a "petition for rule making" -- to adopt the federal label. State law requires the board to consider such petitions.

The March 3 meeting was the first for the Arkansas Oil Marketers Association to have a representative on the board; he voted for the June and July cutoffs, providing the swing vote from the result of the December meeting.

Both decisions were on 8-7 votes by the 18-member board. Two members representing the University of Arkansas System's Agriculture Division don't have voting privileges; its chairman generally votes only to break ties.

Adopting the federal rule also means scrapping 1-mile buffers aimed at giving some level of protection to specialty and organic crops and to UA research fields at stations in Mississippi, Phillips and Desha counties. Those stations have all been hit with dicamba damage at least once since 2016, rendering their research plots worthless.

For most of its 104-year history, the Plant Board, like most state boards and commissions, has met only quarterly, as required by law. With dicamba dominating its time for more than four years, the board is meeting for the 38th time since September 2016. No other state panel has met as often in the period.

The state has received more than 1,600 complaints of dicamba damage since 2016. The number of complaints has averaged about 200 in the past three growing seasons. Farmers who support dicamba's extended use say the decrease in complaints signifies a learning curve; dicamba's detractors say it proves earlier cutoffs help.

After hearing from the public, the board will convene in a regular meeting to make its decision. Adopting the federal rule -- or changing state regulations now in place -- will require a review by legislators. Retaining the May 25 cutoff and other aspects of the current rule won't have to go before legislators.

During a 30-day public-comment period that ended April 22, the board received 316 comments in favor of the proposed rules change and 263 comments against it.

Farmers favoring the extended cutoffs say they need dicamba to fight pigweed, now resistant to other herbicides, including Roundup. Pressure from pigweed increases deeper into the summer, threatening crop yields and necessitating a longer spraying season, those farmers say.

Higher temperatures, however, increase dicamba's volatility -- its ability to lift off plants hours or even days after being applied and move, as a vapor, for miles off target, according to weed scientists.

Audubon Arkansas accounted for 204 of the comments against the proposed change. The conservation group over the past couple of years has had volunteers scouring the countryside for evidence of dicamba damage to trees and other vegetation at parks, wildlife management areas, schools, cemeteries and other public lands.

Two Little Rock attorneys, Cal McCastlain and Richard Mays, who represent farmers opposed to Arkansas' adoption of the federal rules, contended in separately filed comments that the board, in its March vote, failed to comply with Arkansas law requiring it to consider scientific, economic, or technical testimony for any proposed change.

Four backyard gardeners in Caraway wrote separately, calling in their hand-written letters for dicamba to be banned.

"I try to plant a garden to have food to put up, frozen or canned to help me through the winter," wrote Jewel Harris, who said she was 73 and a disabled widow.

"Last year I had 48 tomato plants, putting on tomatoes, [and] 6 rows of peas, yellow squash, green squash, okra, green peppers, hot peppers," she wrote. "The dicamba hit June 23rd. I lost everything in the garden and all my plants in the yard."

Monsanto, now owned by Bayer, developed dicamba-tolerant soybeans and cotton and joined other companies in marketing dicamba formulations intended to be less volatile.

Monsanto allowed weed scientists to study its new dicamba formulation only for efficacy against weeds, not for volatility, before the pesticide's commercial release in 2017. (The three in-crop dicamba formulations approved by the EPA are Bayer's XtendiMax, BASF's Engenia and Syngenta's Tavium.)

While the new EPA regulation requires farmers to add an EPA-approved "volatility reduction agent" to their tank mixes of dicamba, the UA weed scientists said the effectiveness of those agents hasn't been tested in Arkansas or elsewhere.

When Bayer bought Monsanto in 2018, it inherited dozens of lawsuits filed by farmers alleging dicamba damage. Bayer announced last year that it will pay farmers up to $300 million to settle the lawsuits.

The board starting leasing the hotel space after a dicamba public hearing in 2016 drew about 120 people to its boardroom in Little Rock, leading staff members to establish a live video feed in another room for the overflow crowd.

During the public hearing in 2019, with only about 80 people in the hotel ballroom, Franklin Fogleman, an eastern Arkansas farmer who supported a longer dicamba spraying season, said he personally had asked 35 farmers to drive into Little Rock for the hearing. None did, he said. Fogleman cited dicamba "attrition, apathy and fatigue" for those farmers' absence.

The number of comments received during 30-day public-comment periods has mostly waned, too, over the years. The board received more than 25,000 comments in 2017 (mostly general anti-Monsanto comments from other countries), about 2,600 in 2019, and 470 in 2020.

Bray said his staff, including the Agriculture Department's half-dozen or so information technology specialists, worked for several weeks preparing for the online hearing. The online hearing will feature two groups -- panelists and participants.

A staff member can mute a viewer whose public comment devolves into profanity or insults. Bray said anyone who attempts to disrupt the meeting can lose their access.

Department staff members also can do a "hard shutdown, in case we're hacked or someone takes over the meeting," Bray said. "Then it moves to a co-host who has to make a decision -- do we continue or are we compromised to the point where we need an emergency shutdown? We're prepared to kill it if a catastrophic hacking event, for lack of better words, occurs."

The Department of Agriculture, through its various commissions, committees and divisions, had numerous online meetings in 2020.

"We've had some fairly large meetings and, so far, we haven't had power outages; we haven't had our Wi-Fi go down, and we haven't had a hack," Bray said. "I'm just keeping my fingers crossed, hoping good luck holds and that we'll have a good meeting where the board does what the board needs to do."