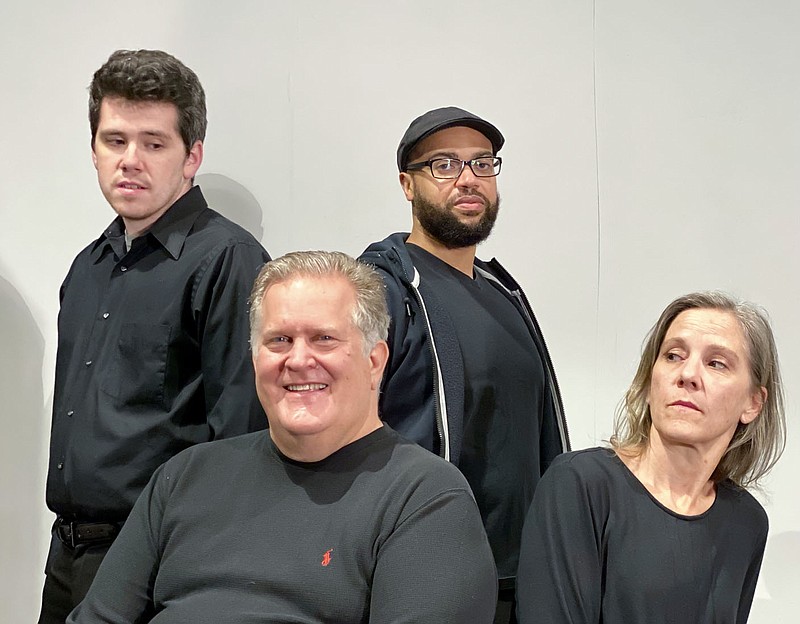 "It might be tempting, very tempting, to play these characters as imitations of the real deal," playwright Lucas Hnath says of his surrealist dramedy "Hillary and Clinton." "Don't do it! Do not play for easy recognition. Don't imitate. Don't even try to cast actors who look like these people.

"Instead, imagine that the audience watching this play has never heard of the Clintons and that this is an opportunity to create these characters anew," he continues, adding that giving in to the temptation to play for laughs obscures "the larger ideas that the play is trying to communicate about gender, power, civics, legacy and public image."

"This isn't the show you think it is," says its director, and APT executive director, Joseph Farmer, adding that it's a challenge to follow Hnath's directives, "but at its core, this is a story of a couple and power."

"It hasn't been too difficult to keep the real Hillary from coloring my interpretation," says Amy Eversole, a veteran APT actress cast in the role. "However, I think it's important to gain some essence of her in order to tell this story. Not so much her gestures or voice, yet her strengths and weaknesses, so that there's an emotional foundation to draw from during the performance.

"Whether you agree with her politics or not, Hillary is a force," Eversole adds, "and the idea of telling a piece of her story is intriguing. After I read the script and realized the unique perspective this show takes, I was even more excited about auditioning. Even though politics is present, it's not the gist of the show. It's a story about life choices; and, a story about relationships and what keeps someone in one rather than leaving when the waters are rough. It's also about the challenge women face in an arena full of men."

Rusty Turner, who made his debut on the APT stage as Pilate in "Jesus Christ Superstar" and was most recently Joseph Pulitzer in "Newsies," (he's also editor of the Northwest Arkansas Democrat-Gazette) says he was looking for a challenge but isn't doing "impressions" of Bill Clinton.

"We don't want it to be a ['Saturday Night Live'] sketch," he says, adding that playing the role "with part of yourself in the character" keeps that from happening. "In this show, everyone knows a lot about the character, so making him different sort of confounds the audience's expectation. I hope that's a good thing."

"It's certainly difficult to resist the urge to try to embody the entire swagger of our 44th President," Justin Stewart, who most recently portrayed Judas in APT's "Jesus Christ Superstar," says of playing the character who might be based on Obama. "I'd be lying if I said that I don't use some of his mannerisms in my performance. I'm really trying to create my own version of 'Barack'."

Only Patrick Edmunds, as political strategist Mark, has the luxury of creating his character from scratch, with no outside influences.

"I love playing Rusty's foil, even though it doesn't end too well for me," he says. "I have been on an Aaron Sorkin kick lately and absorbed by 'The West Wing.' I see Mark as a Bradley Whitford character who can schmooze and convey his point with a tinge of Richard Schiff with urgency and storytelling. Convincing Hillary that she can win is a delicate balance. The baggage she carries due to the 'Clinton' in her name and the 'she' pronoun she carries for a male-dominated position even in an alternate universe still rings true. Mark has to be the person to keep her going in private. In public, she knows who she is. In private, she needs that pick-me-up from time to time.

"The professionalism of the three other actors is exciting and intimidating at the same time," Edmunds adds. "Joey really put together an all-star cast. Audiences should want to see this show for the amazing work that everyone has put in. They should also want to see this show because the story is grounded in truth: How do you manage your personal relationships with your professional ambitions, especially when those two things are in major conflict at a pivotal point in history?"

WHERE — Arkansas Public Theatre in Rogers