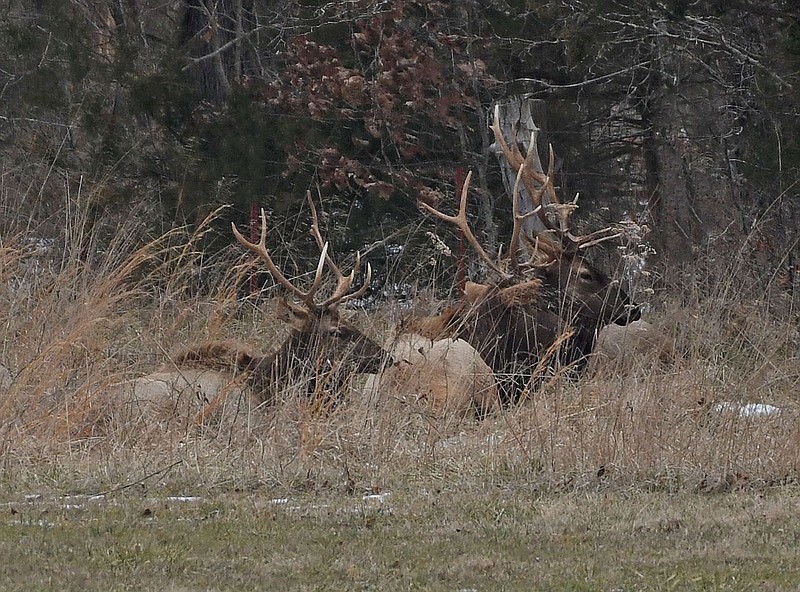 Bull elk lounge at the edge of a meadow Feb. 21 in Boxley Valley near the Buffalo National River. (Courtesy photo/Terry Stanfill)

Twenty public land elk tags will be awarded to Arkansas residents only through a random computerized drawing. Three additional permits will be drawn at the Buffalo River Elk Festival, which is tentatively scheduled for Sept. 3-4.

Applicants for Arkansas public land elk hunt permits must have a valid Resident Sportsman Hunting License or a Lifetime Sportsman’s Permit. Only residents of Arkansas may apply. Applicants must be 6 or older as of the beginning of the hunt to participate. Anyone with 18 or more violations points is ineligible for the permit.

Hunters with access to private land in elk country will follow the same regulations as last year, using a quota system instead of drawn permits. Anyone may purchase a Private Lake Elk Permit (labeled PLE in the AGFC licensing system) for $5 in addition to a valid resident Sportsman Hunting License or nonresident All Game Hunting License.

The private land quota is 35 total, 10 either sex and 25 antlerless. Hunters must call each evening to determine if the quota has been met before the next day’s hunt. The season will end early if the quota is filled.

Applications require a $5 nonrefundable processing fee. Hunters that receive permits will not be required to pay additional fees.

Youth shooting back in action

After skipping the 2020 season because of the coronavirus pandemic, the Arkansas Youth Shooting Sports Program regional and state championships are on schedule for 2021. The first weekend of regional competition for junior high and high school shooters was Friday and Saturday at the Arkansas Game and Fish Foundation Shooting Sports Complex in Jacksonville.

Jimmy Self, the Arkansas Game and Fish Commission’s AYSSP coordinator, said 4,810 shooters were registered to compete in the two divisions.

“We’re down on numbers this year,” he said. “The covid stuff has just hurt us a little bit, but we’re hoping that after this year it all gets over with and we’re back to having our usual numbers, if not more.”

Competing in the tournament as a co-angler, Lammons fell out of the boat, which was not moving at the time, according to Major League Fishing officials. Lammons’s pro partner, whose name has not been released, was unable to rescue Lammons, officials said.

Lammons was an experienced co-angler. He was competing in his 57th career MLF tournament. His best finish was a third-place performance in 2019, also at Sam Rayburn Reservoir in an MLF Phoenix Bass Fishing League event.

Lammons played tight end for the New York Jets from 1966-1971. Originally from Jacksonville, Texas. Lammons attended the University of Texas and led the Longhorns to a victory over No. 1-ranked Alabama in the 1965 Orange Bowl.